Longtime Democratic operative Donna Brazile being named interim head of the Democratic National Committee on Sunday following the ouster of chair Debbie Wasserman Schultz amid the DNC e-mail scandal created some awkward moments for CNN and ABC. Hosts on both networks had to explain that Brazile was stepping down as a political analyst as she took over the new partisan position.

On Monday, the development produced a particularly extraordinary scene on ABC’s Good Morning America, as co-host and former Clinton staffer George Stephanopoulos had to reintroduce Brazile to viewers: “There's Donna Brazile right there. All of you at home know her as one of our ABC analysts, but today you stepped aside from that you’re here as the interim chair of the DNC.”

Only seconds earlier, correspondent Jon Karl explained: “Debbie Wasserman Schultz's resignation is not effective until after the convention, so she will both gavel in and gavel out the convention. Afterwards the reins will be turned over to Donna Brazile as the interim head of the party until after the election.” Co-host Robin Roberts remarked: “I've heard of Donna Brazile.” Karl joked: “Donna Brazile, yes. Should talk to her sometime.”

Following Stephanopoulos’s interview with Brazile about the controversy swirling around the DNC, Roberts turned to political analyst Matthew Dowd and touted: “You sent out a tweet saying Hillary Clinton should fire the DNC chair, replace her with Donna Brazile. That did happen. You said it's a smart pick...”

Dowd – who was supposedly the Republican counterpart to Brazile during commentary segments – gushed over the move:

I have worked with Donna Brazile in the 1980s in campaigns and I've worked against Donna Brazile. We worked on the opposite side in bush versus gore in the course of this and I think many Republicans are going to regret what they wish for because I think Donna Brazile is head of the DNC is going to put together a whole different discipline against the DNC and entirely different campaign, very grass roots oriented. I think it's a really smart pick.

On a special Sunday edition of CNN’s AC 360, host Anderson Cooper was forced to similarly address Brazile’s new role before conducting an interview with her:

Donna Brazile has been tapped to serve as interim chair of the DNC through the election, an honor for her, though a temporary loss, certainly, for CNN. She won’t be appearing as a CNN political commentator while serving as DNC chair. I spoke to Donna just a short time ago about the turmoil threatening to overshadow the days ahead.

Both ABC and CNN brought Brazile on as an analyst throughout last week’s Republican National Convention to offer commentary on the event. Oddly enough, despite her switching hats from media pundit to DNC chair, her liberal talking points remained exactly the same.

Here is a transcript of Stephanopoulos interviewing Brazile on the July 25 GMA:

KARL: Donna Brazile, yes. Should talk to her sometime.

ROBERTS: All right Jon, Thank you. 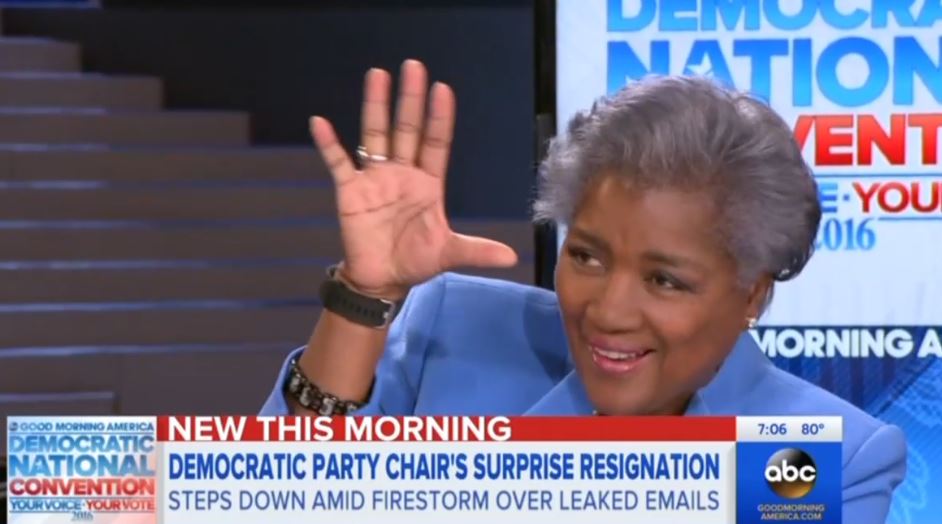 STEPHANOPOULOS: Let's move the camera right over. There's Donna Brazile right there. All of you at home know her as one of our ABC analysts but today you stepped aside from that you’re here as the interim chair of the DNC take over the reins officially Friday. Is it appropriate for Debbie Wasserman Schultz to work through this convention?

STEPHANOPOULOS: But I got to say if I were Bernie Sanders and read all those e-mails I'd be pretty angry as well and shows a real bias against Bernie Sanders. You saw him yesterday saying, “She has to resign.” How did that happen?

BRAZILE: Well, first of all: Hillary Clinton won fair and square. She won the most votes, the most delegates and of course, the most states. There's no question and I have apologized to not only Senator Sanders but all of the other individuals, our donors, our volunteers and everybody who is implicated.

BRAZILE: That’s---Debbie’s a member of congress and I'm sure she understands what's at stake in this election and we need to come together. Tonight we’re going to have a big night. A lot of good voices, Bernie Sanders, Elizabeth Warren and, of course, the first lady of the United States, this is going to be an exciting convention, we're going to break out in a joyful noise tonight.

BRAZILE: I heard that there is a lot of evidence. We knew two months ago when it was first reported that some Russians were behind it. I don't have any connection so I don't know who's really behind it in terms of the Russian government and all the other stuff. I'll let the other people talk about that I want to talk about the convention, George, and the things I think we have to do this week.

STEPHANOPOULOS: Let's talk about that. The new polls this morning show you have your work cut out for you. CNN poll showed a ten-point bounce for Donald Trump and another CBS poll this morning  shows a smaller bounce but still shows a tied race. You all need a good convention.

BRAZILE: You know what, Hillary Clinton comes into this convention as the candidate that can, I believe, answer the questions about the future. Her campaign and her message this week is that we're stronger together, we can solve our problems, we can begin to project a better country with a better future for everybody and tonight we begin that conversation.

STEPHANOUPOLOS:How about the questions about her honesty, all the polls still show majority of Americans think she's dishonest.

BRAZILE: I think what she has to do this week is say, you can trust me to focus on jobs, education, to make sure every American has a more safer and prosperous future.