On Monday, rather than simply remember Muhammad Ali’s boxing career and humanitarian work around the world, NBC’s Today chose to politicize the athlete’s death and praise the liberal activism of his youth. Co-host Savannah Guthrie wanted to avoid a “gauzy portrait” of Ali and instead focus on “How radical, how controversial, and how expensive it was to him personally to do what he did in the '60s, standing up to the war [in Vietnam].”

HBO Real Sports host – and former Today co-host – Bryant Gumbel acknowledged: “It was not only expensive to him personally in financial terms, but it was expensive to him in terms of his image. Because it's easy in hindsight to say, ‘Oh, everybody embraced him and everybody loved him.’ But he did a variety of things that turned off a great portion of America....So not every step he took was a magnificent one that everybody applauded.”

Co-host Matt Lauer turned to NBC Sports anchor Bob Costas and wondered: “...do you think we will ever see any athlete take the risks, the kind of risks  that Muhammad Ali took? Will we ever see an athlete activist like him again?” Costas gushed: “Doubtful. He was a remarkable individual....Ali, mistakes and greatness all taken together – and the greatness overwhelmed the mistakes for sure, and missteps. He was authentic.”

During a taped report at the top of the 7:30 a.m. ET hour, Lauer proclaimed: “Defiant in the face of war, Ali refused to serve in Vietnam in 1967....The champ became a symbol for athleticism and activism. He stood up for crucial issues like civil rights....Ali’s influence on culture, remarkable. On politics, extraordinary. And his legacy, indelible.”

In yet another panel discussion following that segment, New Yorker editor David Remnick again hailed Ali’s left-wing political credentials: “But you have to remember...this was an electrifying, radical, politically radical figure. So it makes news now when Lebron James puts on a shirt to protest, and legitimately protest, the killing of young black men in the street. But then he takes it off and he plays. Muhammad Ali lost three years-plus of his career...”

The fact that Ali endorsed Ronald Reagan for president in 1984 and supported numerous other Republicans over the years wasn’t mentioned in any of the Today show’s coverage.

Here is a full transcript of the June 6 discussion with Gumbel and Costas: 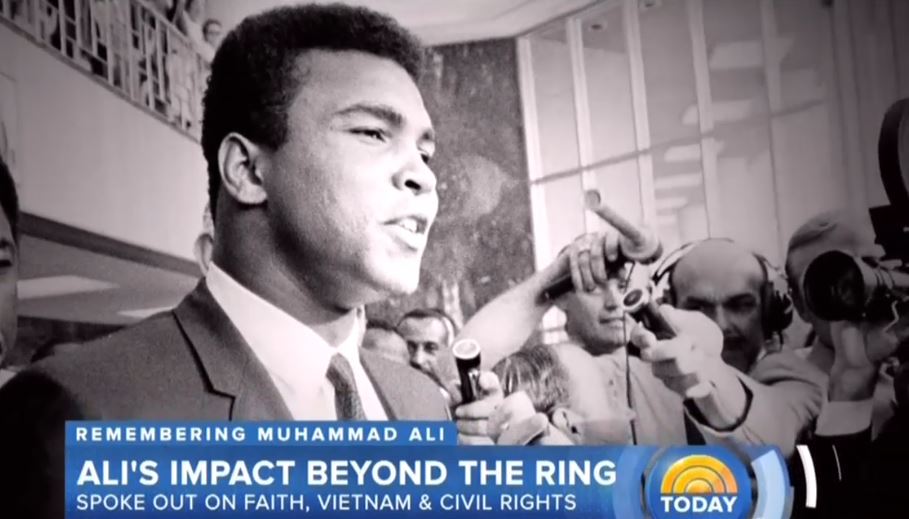 MATT LAUER: We get ready now to say good-bye to The Greatest this morning and we're joined by former Today co-host Bryant Gumbel and NBC's Bob Costas, here with their thoughts on the life and legacy of Muhammad Ali. Guys, good to see you.

LAUER: You know what I spent the weekend worrying about? Does the younger generation get it? Because he had been silenced for past three decades and they didn’t get to see first hand what we all saw.

GUMBEL: It’s funny because Bob and I were just sitting there as we were watching [Craig] Melvin's piece. And I said, do you realize that you're talking about the Rumble in the Jungle, somebody can be 45 years old and not have seen it.

GUMBEL: I mean, there really has been a huge passage of time.

BOB COSTAS: We’re old enough to remember when he was Cassius Clay. And by the way, just as a side note, a lot of what Ali said was profound, some of it was hyperbolic. When he said that Cassius Clay was a “slave name,” that was ironic because the original Cassius Clay was a white abolitionist who was shot by a pro-slavery guy in Kentucky in the 1840s. Now that doesn’t mean that Ali didn't have the right to do what he did and didn’t do it for good reason, but just to correct the historical record, Cassius Clay was an abolitionist.

SAVANNAH GUTHRIE: But to go back to Matt’s original point, I mean, now everyone reveres him. Now everyone loves him and adores him and the temptation is to have this gauzy portrait. But let's set it in its time. How radical, how controversial, and how expensive it was to him personally to do what he did in the '60s, standing up to the war.

GUMBEL: It was not only expensive to him personally in financial terms, but it was expensive to him in terms of his image. Because it's easy in hindsight to say, “Oh, everybody embraced him and everybody loved him. But he did a variety of things that turned off a great portion of America, and I'm not just talking about dividing along racial lines. When he walked away from Malcolm X, I mean, he turned his back on Malcolm X. He lived to regret it and said later he wished he hadn't, but that was a very difficult time. He vilified Joe Frazier in a racial way that if you did it today you’d also be vilified. So not every step he took was a magnificent one that everybody applauded. Oftentimes it was quite the contrary.

LAUER: When you look at today’s world of sports and sports figures, Bob, and you know the money that is at stake and the endorsements, do you think we will ever see any athlete take the risks, the kind of risks  that Muhammad Ali took? Will we ever see an athlete activist like him again?

COSTAS: Doubtful. He was a remarkable individual, plus it’s always a confluence of the individual and the times that produces that individual. I don’t know that you’ll ever get that combination of circumstances again. And now, it seems that everything is about branding. Ali, mistakes and greatness all taken together – and the greatness overwhelmed the mistakes for sure, and missteps. He was authentic.

GUMBEL: Yeah, I’d also argue, it’d be tough to find somebody who approached his level of his platform. The height of his platform, his reach. I mean, you can say Lebron James, and his fame is considerable, but in comparison to Muhammad Ali, is almost nonexistent.

COSTAS: Yeah, here’s a point, may seem minor, but when Muhammad Ali came on the scene in the '60s and through the '70s, boxing was still mainstream. Most Americans have never seen Floyd Mayweather fight. Most Americans couldn’t tell you who the heavyweight champion of the world is. Then, some of the fights were on Pay-per-view, but a week later he’d be with Howard Cosell on ABC, you’d see the whole fight. Some of the fights were on ABC live. People saw all this stuff, they knew who Joe Frazier was.

LAUER: Let just say, you're going to speak at the memorial. What a great honor that is.

GUMBEL: It is a terrific honor. I’d be lying to you if I told you it wasn't daunting.

LAUER: Yeah, you’ll do well, I know that. Bryant, good to see you. Bob, thank you so much.

LAUER: Still to come, more on the life and death of Muhammad Ali, as we look at his impact outside of the ring. We're going to talk to football great, Jim Brown.