On Monday, all three network morning shows reveled in President Obama blasting Donald Trump during a college commencement address over the weekend. At the top of NBC’s Today, co-host Matt Lauer touted: “President Obama takes a not-so-veiled shot at Donald Trump in a commencement address...” A soundbite played of Obama ranting: “It's not cool to not know what you're talking about.”

Moments later, Lauer declared that it had been “a difficult weekend for Donald Trump” with “President Obama is weighing in on the race.” Correspondent Peter Alexander proclaimed: “Donald Trump is on the defensive on several fronts after reports of his past boorish behavior toward women, a lukewarm evaluation from the nation's most powerful Republican, and attacks from the President.”

Alexander cheered: “For Donald Trump, the hits keep on coming....President Obama taking a shot without ever dropping Trump's name.” In a news brief at the top of the 8 a.m. ET hour, he reiterated: “President Obama never mentioned Donald Trump by name but he left little doubt about who he was speaking during his commencement address at Rutgers University. The message to graduates – put a premium on knowledge, not ignorance.”

At the top of ABC’s Good Morning America, co-host George Stephanopoulos announced: “Donald Trump under attack. The President slams the Republican front-runner.” Like on Today, the same clip ran of Obama: “It's not cool to not know what you're talking about.”

In the report minutes later, correspondent Tom Llamas asserted: “Hillary Clinton gets a little help in trying to take down Trump. This morning, Donald Trump's readiness to be commander in chief now being questioned by the President himself.”

On CBS This Morning, co-host Gayle King told viewers: “President Obama took aim at Donald Trump during his Rutgers commencement address. The President yesterday blasted the candidate's position on Muslims, immigrants, and trade while not mentioning Donald Trump by name....The President said the country cannot solve problems by isolating itself.”

Here is a full transcript of the May 16 report on Today: 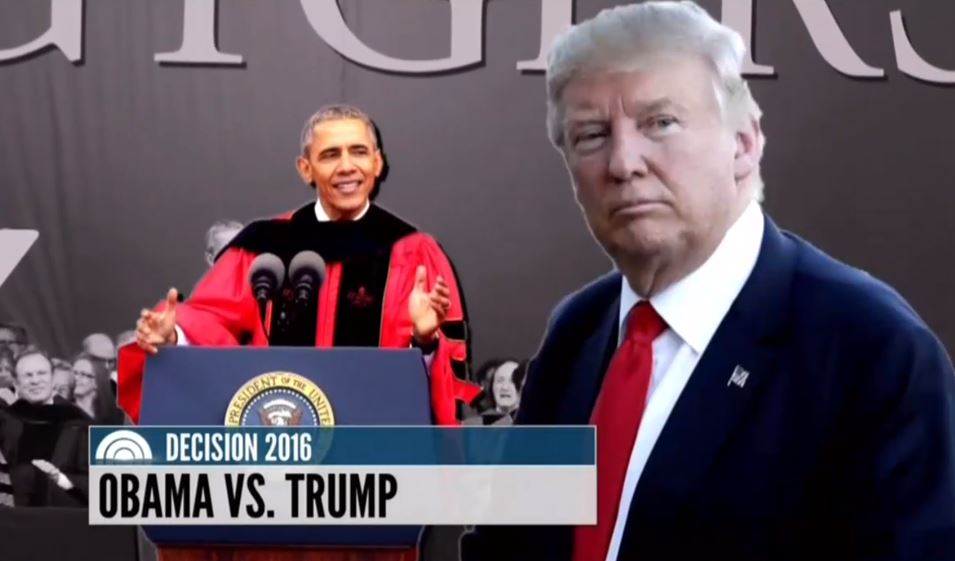 BARACK OBAMA: It's not cool to not know what you're talking about.

LAUER: President Obama takes a not-so-veiled shot at Donald Trump in a commencement address, as the Republican's presumptive nominee fires off a surprising new tweet this morning, encouraging Bernie Sanders to run as an independent.

MATT LAUER: Let's start with what was a difficult weekend for Donald Trump. He's facing new questions over his treatment of women and his taxes. And then President Obama is weighing in on the race. We'll begin our coverage with NBC national correspondent Peter Alexander. Hi, Peter, good morning.

PETER ALEXANDER: Hi, Matt, good Monday morning. Nearly two weeks after becoming his party's presumptive nominee, Donald Trump is on the defensive on several fronts after reports of his past boorish behavior toward women, a lukewarm evaluation from the nation's most powerful Republican, and attacks from the President.

[ON-SCREEN HEADLINE: Trump Under Fire; Obama: “Ignorance is Not a Virtue”]

ALEXANDER: For Donald Trump, the hits keep on coming.

BARACK OBAMA: In politics and in life, ignorance is not a virtue.

OBAMA: It's not cool to not know what you're talking about.

ALEXANDER: Trump’s again attacking his critics, dismissing The New York Times as “dishonest” and “lame,” after its front-page expose on his treatment of women. Detailing unwanted advances and unsettling workplace conduct over decades. According to the report, Trump told one overweight female executive, “you like your candy.” While several other female employees praised the candidate. The paper calling his decision to promote women, quote, “a daring move for a major real estate developer at the time.”

House Speaker Paul Ryan, when asked, refused to say whether the party’s presumptive nominee is someone his kids could look up to.

PAUL RYAN: I think the question is, where are we going from here? I'm not interested in litigating the campaign going into the past.

ALEXANDER: A Clinton staffer tweeting, “This should not be a hard question.” Trump telling the Times, “[Ryan] wants me to be me.” Clinton's campaign is also hammering Trump over his refusal to release his taxes.

TRUMP [2014]: If I decided to run for office, I'll produce my tax returns, absolutely.

TRUMP [2015]: I am officially running for President of the United States.

Meanwhile, in an interview with British television this morning, Trump is hitting back at Prime Minister David Cameron, who previously mocked Trump's suggested Muslim ban from the U.S., calling it “divisive, stupid, and wrong.”

TRUMP: Well, number one, I'm not stupid, okay? I can tell you that right now. Just the opposite. Number two, in terms of divisive, I don't think I’m a divisive person. I'm a unifier. Unlike our president now, I’m a unifier.

ALEXANDER: Already this morning, Trump is chiming in about the Democratic race again. Tweeting, “Bernie Sanders is being treated very badly by the Dems.” “The system is rigged,” he writes. “He should run as an independent. Run, Bernie, run.” Of course Sanders has expressed no interest as running as an independent and repeatedly said Trump must not be president. Matt and Savannah?