After teeing up Hillary Clinton to dismiss her e-mail scandal as a Republican fantasy at the top of Friday’s NBC Today, during a live town hall with Bernie Sanders in the 8 a.m. ET hour, co-host Matt Lauer invited the socialist senator to blast the GOP: “In a recent interview, you said that the GOP civil war that we're all watching right now could lead to a real dissolution of the Republican Party as we know it. As a revolutionary on the other side, do you take some joy in that prospect?”

Sanders seized the chance to hammer his conservative opponents: “I think that when people understand what the Republican Party really stands for and gets beyond personalities....the Republican Party becomes a fringe party....I think this right-wing, extremist Republican Party, their agenda is not the agenda of the American people. The more people know about it, the less support they'll get.”

At the top of the segment, fellow co-host Savannah Guthrie tried to pressure Sanders into backing off his recent criticism of Clinton: “You thought she had called you unqualified – that she had used that word – to be president. And therefore, you repaid the favor by saying she was not qualified. Given what you now know about what she actually said, do you think she is qualified to be president?...Did you overreact because you thought she said something more than did?”

By contrast, in his earlier exchange with Clinton, Lauer actually urged her to attack Sanders’ qualifications: “Do you think in some ways that Senator Sanders proposed some things early in this campaign that he didn't think he would stick around long enough to actually have to defend?...Is he qualified to be president?”

In response to being pressed on his war of words with Clinton, Sanders repeatedly went after the press instead:

I would hope that we get away from these attacks. Which, by the way, the media likes very much....No, again, that's media stuff....What I have found in this campaign – let me be very honest with you – is the world of what the media is interested in and what the people are interested in is day and night....You know, we have got to ask ourselves a hard question, which media often does not, and that is, why are we the only major country on Earth that doesn't guarantee health care to all people?

At one point, Sanders took direct aim at NBC: “Now let me ask you a question, Matt. Can I ask you a question? How often does NBC discuss that issue? Ever?...The issue of massive transfer of wealth that’s going to the top 1/10 of 1%?” Lauer countered: “We're discussing it right now. We're giving you 16 minutes of air time to discuss it.”

The rest of that “16 minutes of air time” was dominated by softball questions from liberal members of audience.

Here is a transcript of all of the questions to Sanders during the April 8 event: 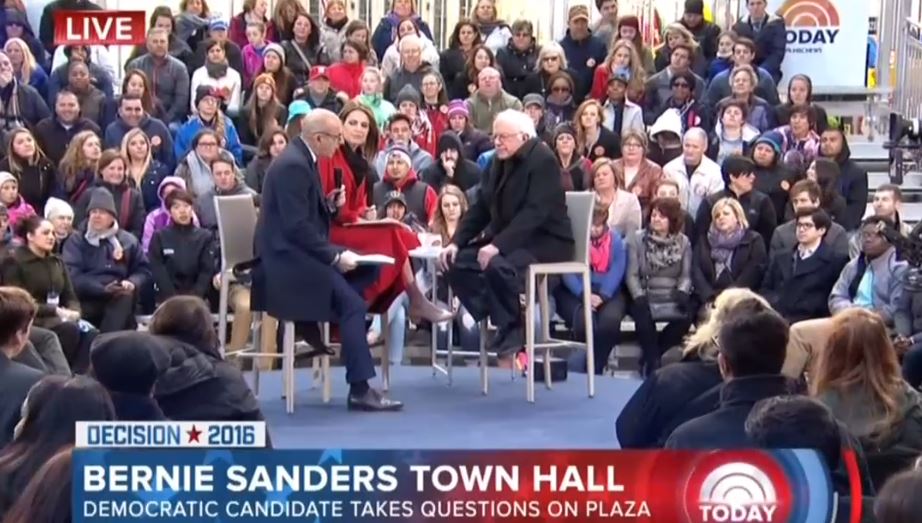 SAVANNAH GUTHRIE: I wanted to ask you about this dust up with Secretary Clinton that’s gone on over the last couple of days. You thought she had called you unqualified – that she had used that word – to be president. And therefore, you repaid the favor by saying she was not qualified. Given what you now know about what she actually said, do you think she is qualified to be president?

GUTHRIE: Did you overreact because you thought she said something more than did?...She’s qualified?

WILLIE GEIST: Senator Sanders, good morning again. I'm with Melissa, she’s a registered Democrat from New York City. Not yet made up her mind in this primary.

MELISSA: Good morning, Senator Sanders. We keep hearing that a woman candidate would be a better advocate for women. What will you do to address gender inequality and women's health issues?

LAUER: I want to ask you something, and before you blame the media for this, Senator, this is something your campaign manager, Jeff Weaver said, caused a bit of a stir when he said, “Don't destroy – he was talking to Clinton supporters – don't destroy the Democratic Party to satisfy the Secretary's ambitions to become President of the United States.” Do you agree with that comment?

SANDERS: Alright, you see, we're off to the gossip.

LAUER: No, no, no. This is what your campaign manager said.

SANDERS: Yeah, I know. But is that an issue that people are staying up nights worrying about?

GEIST: Alright, Senator Sanders, one of the great things about this plaza is it brings people from all over the country. This is Kyle from Ohio, he’s a registered independent who supports you.

KYLE: Good morning, Senator Sanders. Pleasure to get a chance to see you today. My question is this, if you're elected president, how specifically would you go about breaking up banks that are too big to fail?

GUTHRIE: Could you get those initiatives through the Congress, as it is composed right now?

GUTHRIE: So if you had a Republican House and Senate, you believe you could get the legislation you just talked about passed?

LAUER: One of the things about big banks –

GEIST: We’ve got Rob from New York City, registered Democrat, not yet made up his mind. What's your question, sir?

ROB: Why do you think gun manufacturers should be given immunity from lawsuits? Would that extend to cell phone manufacturers, airlines?

GUTHRIE: But every other company is open to lawsuits. Why are gun manufacturers given a special reprieve from liability? I think that's his question.

LAUER: Just settle something for me a second. There was some legislation proposed a while back and you made some comments that made it sound like you were supporting it. This would have done away with that immunity. You said, “I support it and I'm happy it's being raised. I could support that bill.” Did you support it, or did you not understand what was in that bill?

SANDERS: On that issue, but I do have a D-minus voting record from the NRA.

CARSON DALY: Alright, your questions coming in on Twitter using the #BernieToday. Let’s get to one here from @Zim_World666, writing, “Are there any regrets so far in your campaign that you wish you could go back and change?”

LAUER: Let me ask you this, Senator. In a recent interview –

LAUER: In a recent interview, you said that the GOP civil war that we're all watching right now could lead to a real dissolution of the Republican Party as we know it. As a revolutionary on the other side, do you take some joy in that prospect?

GEIST: Senator Sanders, I'm with Verda from New York City. Registered independent and a supporter of yours.

VERDA: Good morning, Senator Sanders. My question is, you mentioned a political revolution and if you don't win the election, what will you do to continue to galvanize all of these amazing young people that are supporting you, as well as those of us that didn't even know you before you started?

LAUER: There was one that came in on Twitter, Senator, And I loved it, so why don’t we end on this? And it was very simple, corn beef or pastrami?

SANDERS: Pastrami all the way!

GUTHRIE: Senator Sanders, do you consider New York a must-win for your campaign?