On Thursday, the broadcast networks wasted no time advancing President Obama’s political strategy to force Republicans to confirm his Supreme Court nominee. The NBC, ABC, and CBS morning newscasts were eager to tout “pressure” being brought to bear on GOP senators to make them “pay a price” for opposing Merrick Garland for the high court.

On NBC’s Today, correspondent Andrea Mitchell proclaimed: “This is shaping up as an epic confirmation battle. Political lines drawn by the President and the Republican Senate and a critical seat on the Supreme Court, for now held hostage to presidential campaign politics.”

She pushed Democrats’ efforts to “shame Republicans” by “Targeting vulnerable Republican senators up for reelection on social media with the #DoYourJob.”

On ABC’s Good Morning America, correspondent Terry Moran highlighted: “Meanwhile, the White House has launched a massive PR effort led by this video with family photos and an emotional interview....make no mistake about it, President Obama and the Democrats are going to pull out all the stops, put as much pressure on Republicans to get him through.”

In the segment that followed, fellow correspondent Jon Karl emphasized the White House forming a “war room” to “try to put pressure on Republicans that are up for re-election facing tough races and there are several of them.” He concluded: “They want to either at least pressure them to give Garland a hearing or to make them pay a price for denying him.”

Wrapping up the segment, Brennan noted: “President Obama will join a conference call with progressive groups to build support for Merrick. The bet is that putting pressure on senators may change some minds.”

Here is a full transcript of Mitchell’s March 17 report on Today:

SEN. PATRICK LEAHY [D-VT]: Have the guts – the guts to vote yes or no.

GUTHRIE: Is the nomination dead on arrival? We’ll talk to the President's chief of staff.

SAVANNAH GUTHRIE: Our top story is the showdown over President Obama's nominee for the Supreme Court. Judge Merrick Garland will be on Capitol Hill today to begin meeting with lawmakers. But Republican leaders are maintaining stiff resistance, saying it is a lost cause. Let’s get right to NBC’s Andrea Mitchell. Andrea, good morning. 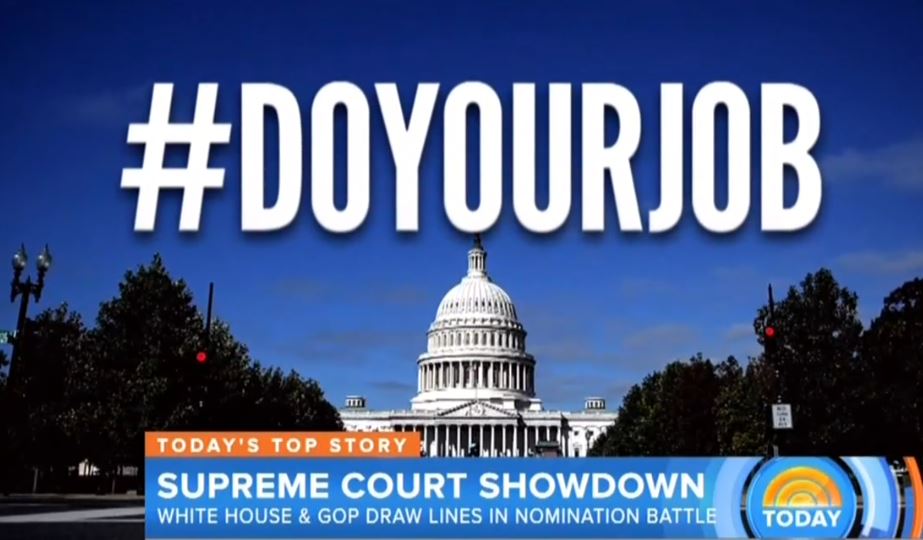 ANDREA MITCHELL: Good morning, Savannah. Well, when Judge Garland goes to Capitol Hill today, he’ll meet with Democratic senators on the Judiciary Committee, but so far no Republicans. This is shaping up as an epic confirmation battle. Political lines drawn by the President and the Republican Senate and a critical seat on the Supreme Court, for now held hostage to presidential campaign politics.

BARACK OBAMA: I simply ask Republicans in the Senate to give him a fair hearing and then an up or down vote.

OBAMA: If you don't, then it will not only be an abdication of the Senate’s constitutional duty, it will indicate a process for nominating and confirming judges that is beyond repair.

MITCHELL: But Republican leaders are not budging.

SEN. MITCH MCCONNELL [R-KY]: It is the Senate's constitutional right to act as a check on a president and withhold its consent.

MCCONNELL: What we’re talking about is a principle and not a person.

MITCHELL: Insisting the vacancy on the court should be filled by the next president, not Mr. Obama.

SEN. PATRICK LEAHY [D-VT]: Have the guts – the guts to vote yes or no.

LEAHY: What they want to do is vote maybe. That is a gutless dereliction of the Constitution.

MITCHELL: Targeting vulnerable Republican senators up for reelection on social media with the #DoYourJob. Judge Garland is hardly a liberal icon, chosen because the White House thinks he is hard to reject on his record or the politics.

MERRICK GARLAND: This is the greatest honor of my life.

MITCHELL: Seen as a moderate, he won votes of 32 Republican senators when he was nominated to the D.C. Circuit court in 1997. Including Orrin Hatch, as senior member of the Judiciary Committee.

SEN. ORRIN HATCH [R-UT]: He's a good man but he shouldn't be brought up in this toxic environment. I’m tired of the Supreme Court being used as a battering ball back and forth between both sides.

MITCHELL: Just last week Senator Hatch told Newsmax he didn't think President Obama would pick Garland because Garland didn't appeal to Democrats’ liberal base. Hatch now says he would consider giving him a hearing after the election in a lame duck session after November. Republicans may be calculating that Judge Garland would be more acceptable to them than anyone a future president Hillary Clinton or even Donald Trump might choose. Matt and Savannah?

GUTHRIE: To be continued, Andrea Mitchell, thank you.