While remembering the legacy of Nancy Reagan on Monday, all three network morning shows made sure to highlight an issue in which she broke with much of the Republican Party – embryonic stem cell research.

On NBC’s Today, correspondent Peter Alexander touted: “With Alzheimer's Disease robbing her husband's memory, Mrs. Reagan was again cast into a supporting role, with a new cause, a champion of stem cell research – an effort that went against the party of Reagan.” A soundbite followed of Mrs. Reagan: “I just don't think they understand that it's – it’s not taking a life, it's trying to save countless lives.”

During special coverage on Sunday, correspondent Andrea Mitchell applauded the former First Lady for standing up to GOP “orthodoxy” on that issue and gun control:

...her acceptance of stem cell research and Alzheimers research, and also the scientific developments that were anathema in the Republican Party at the time. And it was her voice who courageously led the way within conservative Republican circles to think differently about a lot of this scientific research....And also think about the Brady Bill and gun control – that she and Ronald Reagan, after the terrible harm that was done to Jim Brady, their press secretary – she was completely and passionately devoted to that struggle as well. And that was also not Republican orthodoxy, but it was where the personal crossed the traditional Republican views.

In that same special report, Mitchell argued that Nancy Reagan “would be pretty concerned about the state of the Republican Party.”

After playing a clip of the exchange with Sawyer, Davis noted how, in 2009, Reagan “met with President Obama at the White House as he signed the Reagan Bill” approving the controversial research. 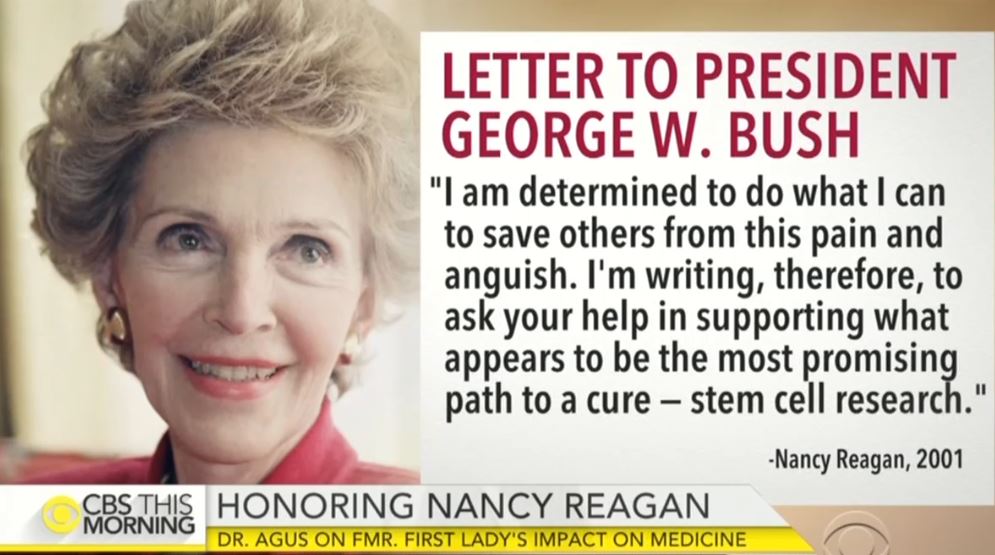 Wrapping up a segment with medical contributor Dr. David Agus on CBS This Morning, co-host Gayle King asked: “Before we go, I know you knew Nancy Reagan. What would you like to say about her today?” Agus replied: “You know, she’s a hero in the medical community. When Nancy Reagan announced, as one of the most prominent Republicans out there, that we have to change our stance on stem cells and actually pushed for progress on Alzheimer's, that was remarkable and really changed the face of a disease.” Fellow co-host Norah O’Donnell chimed in: “Disagreed with much of her party on that issue.”

None of the hosts or journalists bothered to explain that such research meant destroying viable human embryos or that only adult stem cells have shown any ability to treat disease.