On Monday’s NBC Today, a look back at Nancy Reagan’s various appearances on the morning show over the years showed her repeatedly combating liberal media bias demonstrated by the hosts with whom she sat down.

In one clip, former co-host Bryant Gumbel pressed: “When it’s suggested, as it often is, that you are the power behind the throne?” Mrs. Reagan immediately rejected the notion: “I am not the power behind the throne, but I’ve gotten to the point now where I think I can say it just so often and then if people are gonna keep on saying it, there’s nothing I can do about it, but it's not true.”

He then remarked: “I see you lighting up over there, Mrs. Reagan.” She replied: “Oh, yes, because that's not – that's not a fair judgment or statement.”

Earlier on Monday’s broadcast, Brokaw was on the program to share his memories of the First Lady and recalled another time when she took him to task for his slanted reporting:

There’s a quick story that want to tell you. When they first got elected, I said some things in the press that she thought were far too critical about his – not his childhood so much, but when he was a young man, he started making pretty good money right away and he was one of the highest paid people in Hollywood.

So I was told by the White House staff, “Stay away from her, she's really angry. But you're going to be invited to a state dinner so you have to figure out what you're going to say to her when you get to the receiving line.” And I'm walking up to the receiving line, and Meredith was with me, and Meredith is getting more nervous than I am, she keeps saying, “What are you going to say?” And I said I hadn't figured it out yet. So I got to her, and I said, “Nancy, back to square one.” She laughed. [Holding up a picture] This was the moment in which she said to me, “Tom, back to square one.” This picture arrived the next day in my office, autographed by her, “Tom, back to square one.” That's how good she was, how nimble she was, and how political she could be. So this is something that I kind of treasure.

Here is a full transcript at the March 7 report segment:

MATT LAUER: Alright, as we mentioned, Nancy Reagan was a frequent and favorite guest of ours here on Today, always full of grace and charm, whether appearing by herself or by her husband's side.

[ON-SCREEN HEADLINE: The First Lady on Today; A Look Back at Her Memorable Moments]

LAUER: She was a force in her husband's shadow.

BRYANT GUMBEL: When it’s suggested, as it often is, that you are the power behind the throne?

NANCY REAGAN: I am not the power behind the throne, but I’ve gotten to the point now where I think I can say it just so often and then if people are gonna keep on saying it, there’s nothing I can do about it, but it's not true.

LAUER: From one of her earliest interviews on Today in 1980, Nancy Reagan at her husband's side and on his side. 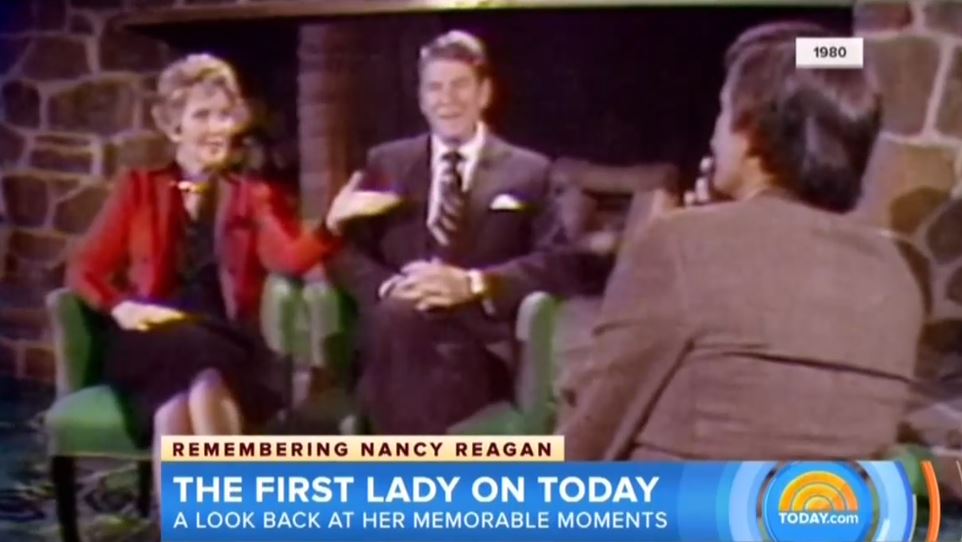 TOM BROKAW [1980]: A kind of ironic marriage here, of a candidate and the background with a kind of constituency that you might –

REAGAN: Do you know anything about his background?

REAGAN: Oh, yes, because that's not – that's not a fair judgment or statement.

LAUER: A role she adopted throughout his presidency.

REAGAN [1984]: I think he's been a very good president. I know that'll come as a surprise to you.

LAUER: During her time in the White House, her biggest challenge remained living under a microscope.

REAGAN [2004]: I'd been the first lady of California for eight years and I thought, well, surely, you know, I've seen it. It can't get any worse than this. But it did. And it does. I mean, you're really, really in a fish bowl.

LAUER: But things did get worse. Her husband's attempted assassination.

REAGAN: I almost lost him, and people didn't know that.

LAUER: To her husband's battle with Alzheimer's.

REAGAN: Well, he's doing as well as can be expected. I guess that's the only way you can put it. You know, it's a progressive disease. Doesn't get better.

LAUER: Always devoting herself to her husband's legacy, adoringly and willingly.

COURIC [2004]: Where do you find your strength every day?

REAGAN: I don't know, Katie. You just do what you have to do.

LAUER: But Nancy Reagan was a strong political and influential figure in her own right, with a title not many of us will ever hold – First Lady.

COURIC: It can be tough, can't it?

REAGAN: Oh, yes, it can. Yes, it can. And I have great empathy for them. It's a very small little sisterhood, you know.

LAUER: The relationship between Ronald and Nancy Reagan played out like a love story, documented by hundreds of love letters.

LAUER: Testament to a marriage that lasted 52 years.

COURIC [2002]: You have said in the past that your life began when you met Ronald Reagan.

REAGAN: It did. Everybody made fun of me, but –

COURIC: They did? Why did they make fun of you?

REAGAN: I don’t know, its sounds kind of square, I guess.