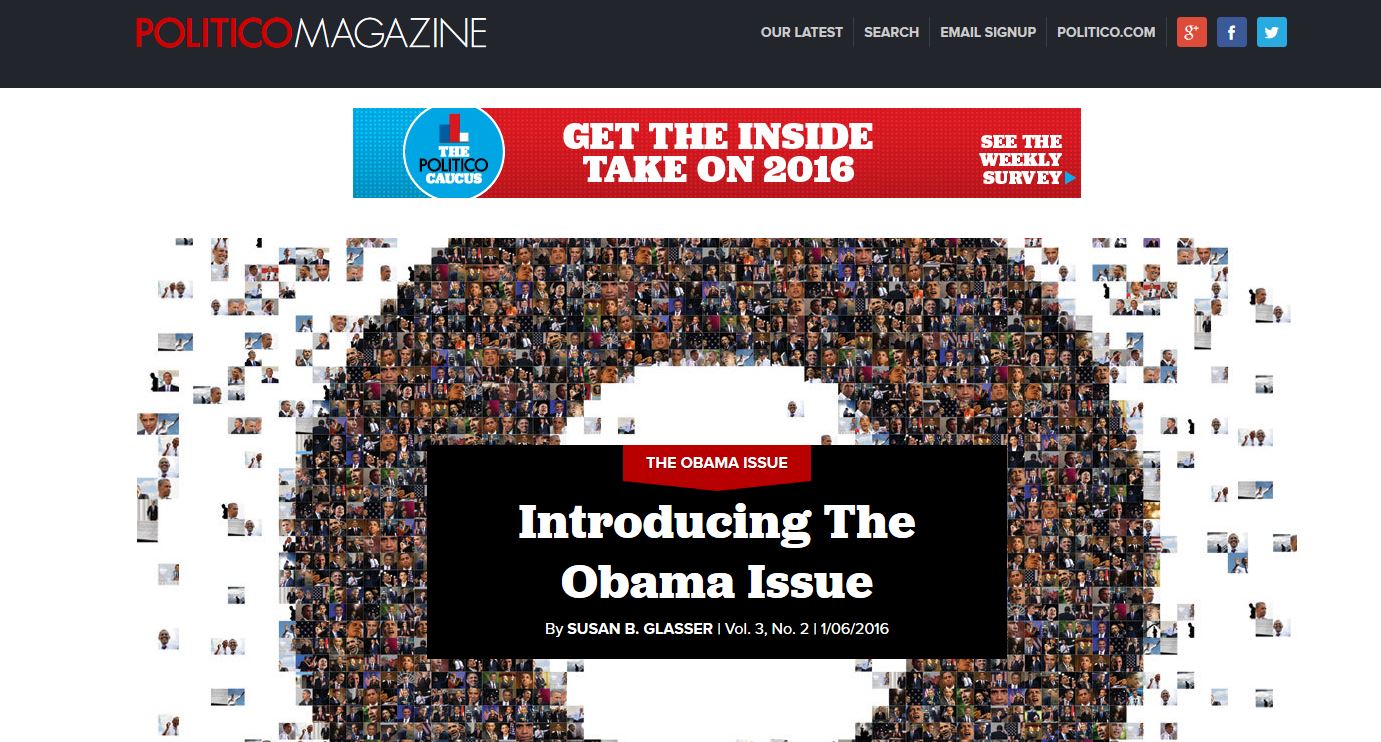 The latest gushing edition of Politico Magazine released on Wednesday entitled “The Obama Issue: A Special Report on a Historic Presidency,” was loaded with one article after another largely celebrating the impact of President Obama’s waning administration.

In one lengthy write-up, senior staff writer Michael Grunwald examined “The Nation He Built,” and argued that Obama “has engineered quite a few quiet revolutions – and some of his louder revolutions are shaking up the status quo in quiet ways....the Obama era has produced much more sweeping change than most of his supporters or detractors realize.”

Grunwald proclaimed: “[Obama] promised dramatic policy change, vowing to reinvent America’s approach to issues like health care, education, energy, climate and finance, and that promise he has kept....this has been a BFD [Big F***ing Deal] of a presidency, a profound course correction engineered by relentless government activism.”

He marveled at how the President was not merely “a silver-tongued political savant,” but “turned out to be much more of a doer, an action-oriented policy grind who has often failed to communicate what he’s done.”

Grunwald hailed the myriad of ways Obama changed the country:

What he’s done is changing the way we produce and consume energy, the way doctors and hospitals treat us, the academic standards in our schools and the long-term fiscal trajectory of the nation. Gays can now serve openly in the military, insurers can no longer deny coverage because of pre-existing conditions, credit card companies can no longer impose hidden fees and markets no longer believe the biggest banks are too big to fail. Solar energy installations are up nearly 2,000 percent, and carbon emissions have dropped even though the economy is growing.

Millions of ordinary white citizens and right-wing critics didn’t cotton to our first black president’s chutzpah in capturing the highest office in the land—and they have been unleashing venom ever since....The sick attempt to paint Obama as un-American—a closet socialist, a secret Muslim and a hater of democracy, no less—didn’t stop there.... On TV, Glenn Beck asserted that Obama had “a deep-seated hatred for white people,” while Rush Limbaugh spewed a steady stream of invective on his radio show, from playing a song dubbed “Barack the Magic Negro” to claiming that Obama wanted Americans to get Ebola as payback for slavery.

Dyson concluded: “But Obama, while always acknowledging that racism is deeply rooted in our culture, has, for most of his presidency, avoided addressing the plague of race....He refused to pity himself – but failed, as did so many of us, to read the anti-Obama signs and songs and social media outbursts as symptoms of the persistence of swirling racist currents in American society.”

Only one article by senior foreign affairs correspondent Michael Crowley examined the President’s failed foreign policy and how his administration routinely “caved” to dictators.

National Review’s Rich Lowry was the only conservative “dissenting view” permitted in the “historic” issue.

Beyond the substantive analysis of Obama’s legacy, the magazine was loaded with propaganda images of the President – especially the cover, which featured hundreds of pictures of the commander-in-chief forming a collage to make the letter “O.”