Nets Amazed by Obama’s ‘Anger and Emotions’ on Gun Control

All three network morning shows on Wednesday were in awe of President Obama tearing up during his White House gun control address on Tuesday. On NBC’s Today, co-host Matt Lauer used the “rare display of emotion” to tee-up a four-minute segment on “The Politics of Tears” and Obama being the “Latest in Long Line of Emotional Politicians.”

Correspondent Andrea Mitchell proclaimed: “Well, he is famously known to his staff as ‘No-Drama Obama,’ even criticized as a political Mr. Spock, but President Obama was unapologetically angry and emotional when talking about the victims of gun violence, especially the children of Newtown.”

She sympathetically observed: “Perhaps it was the weight of so many tragedies – Charleston, Gabby Giffords, San Bernardino, Sandy Hook Elementary. The thought of those children reducing the most powerful man in the world to tears.”

On ABC’s Good Morning America, co-host George Stephanopoulos made a similar declaration: “We move on to the battle over gun control right now and those tears from President Obama during his passionate pitch for new action yesterday....the President's anger and emotions so palpable...”

Correspondent Pierre Thomas announced: “The President clearly impacted by the daily carnage in places like Chicago and all those mass shootings, especially Newtown. Tears flowing as he announced a series of actions.”

On CBS This Morning, co-host Charlie Rose touted Obama’s “rare show of emotion,” while correspondent Margaret Brennan gushed: “Well, President Obama mourned a wave of gun violence in America and said he is trying to tighten restrictions on gun sales. The moment became one of the most heartfelt speeches of his presidency.”

Today scolded critics for daring to question the President’s public display of emotion. At the top of the show, Lauer fretted: “Republicans question the sincerity of the President's emotional news conference.” Minutes later, correspondent Peter Alexander declared: “And hours after President Obama's emotional appeal for an end to gun violence, the Republicans remained unimpressed.”

In a discussion at the top of the 9 a.m. ET hour, co-host Willie Geist bemoaned how Obama’s address “became a partisan issue almost instantly,” as “Some people say they were crocodile tears to help get gun control through.”

He rushed to the President’s defense: “I think any of us who sort of covered that story, any time I think about Sandy Hook, you feel that as well. It doesn't mean his policies are going to fix the gun problem, it doesn't even mean they’re the right thing, I’m just talking about that emotion right there.”

Fellow co-host Tamron Hall added: “Behind were the parents who lost their children in violence, with gun violence. The Newtown children, children in Chicago, you see them in the background. How could you stand in the presence of that pain that continues every day they have to wake up without those children and not be moved by that? Politics aside.”

On GMA, Stephanopoulos noted how “opponents of his new executive action are putting up a fierce fight,” with Thomas remarking that “reaction from the NRA and the GOP was fast and, as you said, furious.” Thomas then pitted Republicans against victim’s families: “So, any major bipartisan movement in the near future is unlikely. But, George, I was struck by all those families from the tragedies, some of whom told me they are in this fight for the very long haul.”

CBS This Morning actually provided soundbites from numerous GOP candidates denouncing the President’s unilateral action, even as Brennan parroted White House talking points: “...the President said, after watching the National Rifle Association lobby Congress to kill gun legislation shortly after the Newtown massacre, he had no choice....White House officials admit these are, at best, modest proposals for more regulation, but say it's the most the President can do without help from Congress.”

Here is a full transcript of the January 6 report on Today:

SAVANNAH GUTHRIE: He wiped back tears, if you saw it during the speech on gun violence. It got us thinking about what happens when politicians wear emotions on their sleeves and NBC's Andrea Mitchell has been looking into that part of the story. Andrea, good morning, again. 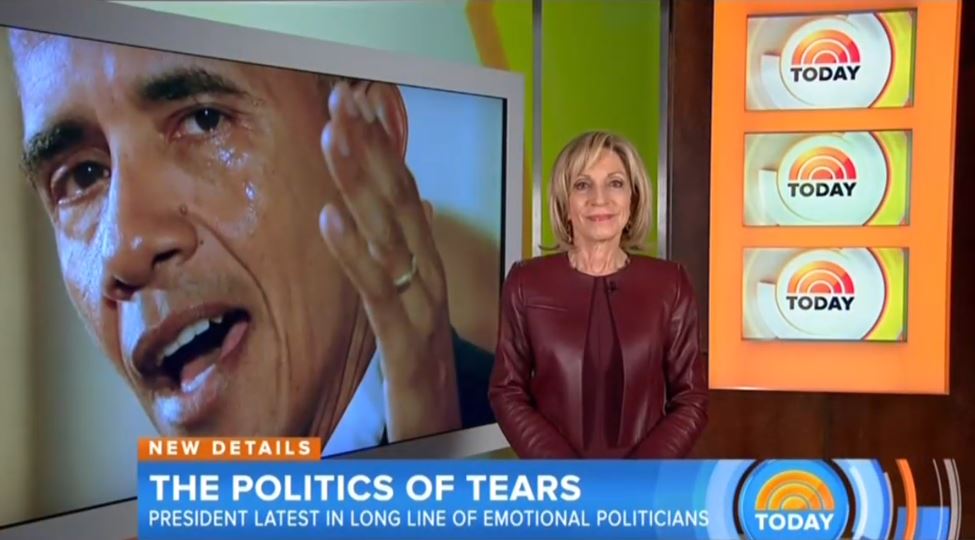 ANDREA MITCHELL: Good morning again, Savannah. Well, he is famously known to his staff as “No-Drama Obama,” even criticized as a political Mr. Spock, but President Obama was unapologetically angry and emotional when talking about the victims of gun violence, especially the children of Newtown.

Perhaps it was the weight of so many tragedies – Charleston, Gabby Giffords, San Bernardino, Sandy Hook Elementary. The thought of those children reducing the most powerful man in the world to tears.

BARACK OBAMA: First graders. And from every family who never imagined that their loved one would be taken from our lives by a bullet from a gun. Every time I think about those kids it gets me mad.

MITCHELL: It isn't the first time this President has cried in public. Sometimes it's personal, when the grandmother who raised him died.

MITCHELL: Or after winning re-election, thanking his campaign team.

MITCHELL: But Barack Obama is hardly alone among politicians showing their emotions. It can cut both ways. Former Senator Ed Musky's presidential hopes were washed away on a teary day in 1972. In 2008, Hillary Clinton won New Hampshire by showing her human side.

HILLARY CLINTON: I just don't want to see us fall backwards, you know, so.

MITCHELL: Even Dwight D. Eisenhower, the celebrated commander of allied forces in World War II, wasn't afraid to cry while saluting veterans of the 82nd airborne during the 1952 campaign. Ronald Reagan didn't cry, but his emotions were raw after the Challenger exploded in 1986.

RONALD REAGAN: As they prepared for their journey and waved good-bye and slipped the surly bonds of Earth to touch the face of God.

MITCHELL: The first President Bush, out of office, struggled to express his feelings about son Jeb in 2006.

GEORGE H.W. BUSH: The true measure of a man is how you handle victory and also defeat.

MITCHELL: After 9/11, the second President Bush.

GEORGE W. BUSH: Our unity is a kinship of grief.

MITCHELL: The son feeling the comforting hand of his father. But no president has been a match for the former Speaker of the House.

JOHN BOEHNER: Our hearts are broken but our spirit is not.

Presidents and other politicians turning the old adage on its head. Big men and women do cry. Back to you guys.

LAUER: Look back at those stories as we remember them, I thought Ronald Reagan's words...

LAUER: ...after that shuttle disaster was – still, every time I hear them I get choked up.

MORALES: It pierces your soul.

LAUER: It does. Carson’s over in the Orange Room and a lot of people are talking about this online. Carson, what are they saying?

CARSON DALY: Well, the response on social media was rather mixed. Of course there is support for the President, like from New York Times columnist Nicholas Kristof, tweeting, “Some think that Obama's tears about gun violence show weakness. Nope. We should all be crying about 32,000 American deaths a year.” Another tweet reads this, “Seeing President Obama cry makes me proud to have a leader so moved by the stories and lives of Americans.” Using the #EndGunViolence.

But there were others who were not so moved. This one, “and the Oscar for the ‘best fake crying to make an emotional point to push his anti-gun agenda’ goes to President Obama!!!” And Nick here addressing his message right to the President’s senior adviser Valerie Jarrett, tweeting, “At least have Obama practice making fake tears before putting him on stage. Today’s performance was brutal.” Guys, like it or not, social media had plenty to say on this topic.