Introducing a report on Monday’s CBS This Morning about the climate change conference being held in Paris, co-host Norah O’Donnell worried that “security concerns threaten to overshadow the talks.” Correspondent Margaret Brennan followed: “The world's two biggest polluters, China and the U.S., kicked off the climate change summit....The goal in Paris is to limit global warming to 3.6 degrees Fahrenheit from pre-industrial levels, but the terror threat is diverting attention.”

Moments later, Brennan lamented environmental protests being prevented due to new security measures in Paris: “Riot police have been deployed in unprecedented numbers. On Sunday, 174 protesters were arrested for defying the government's ban on demonstrations....Environmentalists silently protested the ban on their march, leaving their shoes in the square they had hoped to walk through.”

O’Donnell began the segment by promoting a new CBS News/New York Times poll “shows most Americans support the goal of the conference. 66% say the U.S. should join an international treaty to reduce global warming. 54% say protecting the environment is more important than stimulating the economy.”

What she failed to mention was that 56% of Americans responded “not at all” or “only a little” when asked how much they worried about climate change. When asked about a specific proposal to increase taxes on electricity to combat the issue, 60% “oppose strongly.” Asked about raising taxes on gasoline, 60 % opposed either “strongly” or “not that strongly.”

At the top of the 8 a.m. ET hour of the show, fellow co-host Charlie Rose touted White House talking points: “President Obama says this morning that the future is under threat without aggressive efforts to slow carbon emissions....He says global warming will trigger a new refuge crisis as people flee cities flooded by rising seas.”

In a report that followed minutes later, correspondent Mark Phillips proclaimed: “Well, world leaders may be negotiating what to do about climate change in Paris but some of the most important research on the subject is being done about as far away from civilization as you can get.” The headline on screen declared: “Climate Change’s Front Lines; American Researchers Face Danger Near Arctic.”

Phillips reported from a group of Norwegian islands in the Arctic to profile climate researchers braving the harsh region to examine “a worrying trend – the release of greenhouse gases which scientists used to think were safely locked into the frozen ground.”

Phillips promoted scientist Hannah Miller asserting that “Climate change decisions...have to be based on science.” A soundbite followed of Miller complaining: “The frustration comes in when climate change deniers use any of the uncertainties to say that your argument is false, because you – you can have uncertainties and still have solid argument.”

Wrapping up his report, Phillips gushed over the “small, dedicated, and brave community” doing “cutting edge science up there on the edge of the world.”

Co-host Gayle King praised Miller’s attack on “climate deniers”: “Wow. Such an important conversation to have. I like what she just said, said you can have uncertainties and still have a solid argument...We gotta do something.”

O’Donnell chimed in: “And that the largest gathering of world leaders on this issue in Paris less than two weeks after those attacks, trying to forge some sort of compromise and deal to move forward to, in their words, save the world.”

Here is a full transcript of the November 30 report from Phillips: 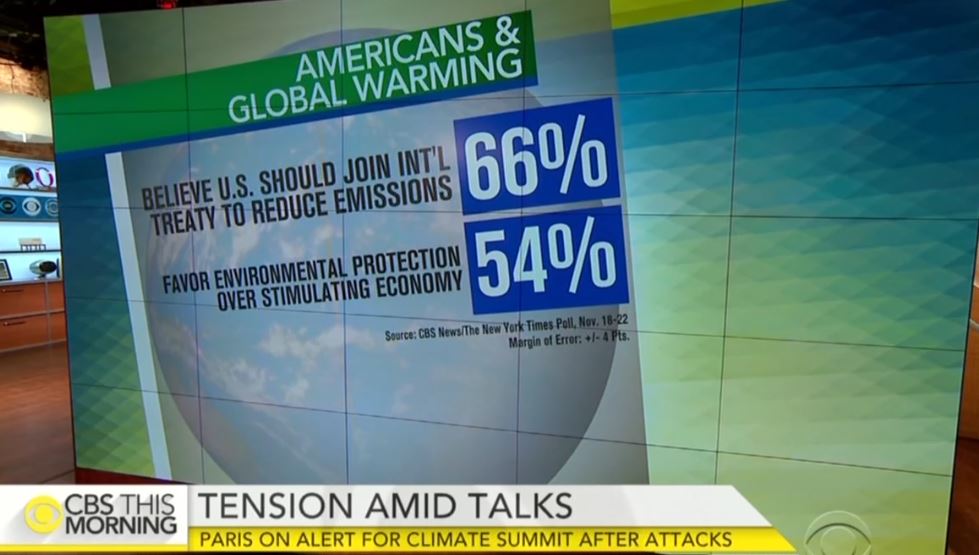 NORAH O’DONNELL: The CBS News/New York Times poll out this morning shows 53% of Americans believe global warming is caused by human activity. 31% think natural patterns are mostly the biggest factor. American experts are working in some of the world's most dangerous places to learn the impact firsthand. This morning, Mark Philips begins The Climate Diaries, a series of reports showing how people are responding to the challenge. He’s back in London. Mark, good morning.

MARK PHILLIPS: Good morning. Well, world leaders may be negotiating what to do about climate change in Paris but some of the most important research on the subject is being done about as far away from civilization as you can get.

This is Svalbard, a collection of Norwegian islands just 800 miles from the North Pole, and it’s where a young American climate scientist has come to try to unlock some of the secrets of climate change that have been frozen into this landscape for tens of thousands of years. Sarah Strand, a 22-year-old Californian, won't see the sun again until mid-February. The polar night has set in and darkness isn't the only thing to worry about up here.

SARAH STRAND: So I will take the flare gun if you want to take the rifle.

PHILLIPS: This is polar bear country, where Sarah and her German colleague Norbert Pirk are required by law to pack protection. The bears are more of a threat in summer, when the melt-back of their sea ice hunting ground has made them more desperate for food, even to the point of attacking a research boat. But they are still a threat in winter, and it's in winter that this research must be done.

[TO STRAND] This is basically your baby up here, is that right?

STRAND: Yeah, this definitely has to be running if we’re going to get all of the data.

PHILLIPS: Otherwise all of this suffering is for nothing?

Every day, Sarah comes out here to check instruments that are measuring a worrying trend – the release of greenhouse gases which scientists used to think were safely locked into the frozen ground.

STRAND: The main thing we’re looking at is the gas exchange with the ground, carbon dioxide and methane, but then we’re comparing that to other parameters that we’re measuring here.

PHILLIPS: And the more those greenhouse gases are released, even from frozen places like this, the more warming there will be.

NORBERT PIRK: There are concerns of that, yes. Especially with the permafrost thawing, that there is now old carbon that has become – becoming available again to possibly be released into the atmosphere. We are trying to shine some light on this.

PHILLIPS: In the dark?

PHILLIPS: Sarah has been here a year and a half, working in these conditions because the arctic is, ironically and worryingly, where the Earth appears to be warming most. They call it “arctic amplification.” It's hard to tell on a day like this, but the arctic is warming sooner, faster, and more than anywhere else. Why that’s happening and what it means for the rest of us is why this little speck in the Arctic has become the major center of climate research.

STRAND: You can't just measure one thing and say, “Oh, I found climate change.” But it's more about having all of these monitoring projects and understanding how the system is working.

PHILLIPS: Another American, Hannah Miller, a 21-year-old from Vermont, is here too. She didn't come for the skiing. She came to study how glaciers are shrinking, their melt water contributing to sea level rise. Climate change decisions, she says, have to be based on science.

HANNAH MILLER: The frustration comes in when climate change deniers use any of the uncertainties to say that your argument is false, because you – you can have uncertainties and still have solid argument.

PHILLIPS: Hannah and Sarah have joined a small, dedicated, and brave community in Svalbard. It's cutting edge science up there on the edge of the world. Norah?

GAYLE KING: Wow. Such an important conversation to have. I like what she just said, said you can have uncertainties and still have a solid argument. It’s good that people are paying attention to this.

KING: We gotta do something.

ROSE: And it just shows you where in so many pockets of the world people are doing really interesting scientific work.

O’DONNELL: Yeah. And that the largest gathering of world leaders on this issue in Paris less than two weeks after those attacks, trying to forge some sort of compromise and deal to move forward to, in their words, save the world.

ROSE: Dealing with important problems and not being scared because it comes two weeks after a terror attack.

O’DONNELL: Indeed, thanks again, Mark Phillips. And Mark will have more from Norway on tonight’s CBS Evening News. He’s reporting on the effects and responses to climate change in his series, it's called The Climate Diaries.