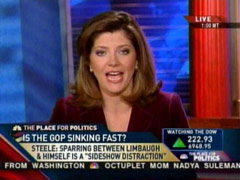 At the top of Wednesday’s 3:00PM EST hour on MSNBC, anchor Norah O’Donnell declared: "Well, the back and forth between Rush Limbaugh and RNC Chairman Michael Steele continues. A new NBC News/Wall Street Journal poll shows the GOP's approval is sinking fast, only 26% of those polled give the party a positive rating." O’Donnell spoke to Jennifer Skalka, editor of the blog Hotline On Call, and asked her about Rush: "Rush Limbaugh, today, really upped the ante, for the first time, saying he wants to challenge Barack Obama to a debate on his show...What's he doing? Is he walking into the trap that the Democrats, including President Obama's Chief of Staff, Rahm Emanuel, set? Which is to try and anoint and make Rush Limbaugh the face of the Republican Party."

In a segment near the end of the hour, while discussing the issue with Democratic strategist David Goodfriend and Republican strategist John Feehery, O’Donnell reiterated the idea that Limbaugh was somehow falling into a Democratic trap: "...are the Democrats just licking their chops? I can just only think as soon as I was told what Limbaugh said on his show today, that he challenged the President to a debate, I can only imagine they were laughing at the White House, that he's taking their bait."

Following the earlier segment with Skalka, O’Donnell spoke with correspondent John Harwood about the latest poll numbers: "Our new NBC News/Wall Street Journal poll shows Democrats are winning the public opinion race and Republicans are losing the tug of war...The president's favoribility is his highest ever, 68%... On the flip side, just 26% view the GOP positively. Their all-time low...It's pretty bleak for the Republicans right now, isn't it?" Harwood replied: "Well, it's very bleak. And I got to tell you Norah, I don't think this Rush Limbaugh thing could be working out much better from the point of view of the White House and Rush Limbaugh. Just everybody except actual Republican politicians..."

Here is the full transcript of the segment at the top of the hour:

NORAH O'DONNELL: Plus, is Rush ready to rumble? The conservative talker issues a new challenge today for President Obama as the chatter heats up on who's really in charge of the GOP.

NORAH O'DONNELL: And we just mentioned it, who really is leading the Republican Party? Well, the back and forth between Rush Limbaugh and RNC Chairman Michael Steele continues. A new NBC News/Wall Street Journal poll shows the GOP's approval is sinking fast, only 26% of those polled give the party a positive rating. Jennifer Skalka, the editor of Hotline On Call, joins me here now. Jennifer, how many Republican leaders are now worried that Michael Steele is the chairman of their party, that he's a loose cannon when it comes to being on television?

JENNIFER SKALKA: Well I haven't heard anyone come out personally and say that he's a loose cannon, but there's certainly a lot of rumbling going on behind the scenes and in the conservative blogosphere in particular. I can tell you that in my recent past life as a reporter with the Baltimore Sun I covered Michael Steele's Senate race and he is known for foot-in-mouth moments, so this is nothing new. He -- he compared embryonic stem cells research during that campaign to Nazi medical experimentation in front of a collection of Jewish leaders in Baltimore and spent three days apologizing for that. So -- so Marylanders know well that, you know, he's a big personality and sometimes he definitely says things he probably shouldn't say.

O'DONNELL: So this is not new, him sort of having foot-in-mouth disease, as some -- as some might say. But anyway, Rush Limbaugh, today, really upped the ante, for the first time, saying he wants to challenge Barack Obama to a debate on his show. Rush says he's not the leader of the Republican Party, but he wants to debate Barack Obama. Let's listen.

RUSH LIMBAUGH: If you want bipartisanship, I mean, what are we -- what better definition of bipartisanship could there be than you coming to debate me on these issues of the day? This is not, Mr. President, a cheap trick just to get an interview.

O'DONNELL: What's he doing? Is he walking into the trap that the Democrats, including President Obama's Chief of Staff, Rahm Emanuel, set? Which is to try and anoint and make Rush Limbaugh the face of the Republican Party.

O'DONNELL: But politically speaking, when we showed the NBC News/Wall Street Journal poll, that the party's approval ratings are 26%. And they've done polling that shows Rush Limbaugh is very unpopular with the independents. How does it hurt the Republican Party to have Rush Limbaugh as the face in many ways?

SKALKA: Well, I think it hurts them, obviously, in attracting new, younger, more moderate voters into the fold. But remember that the conservative base, in many ways, abandoned the party in the last presidential election and Rush is still enormously popular with the base. He gets them very excited. And we're seeing that in their defense of him in this Michael Steele squabble.

O'DONNELL: Let's play Michael Steele, because he was on the Today show this morning and responded to questions about who really is in charge, let's listen.

MICHAEL STEELE: There are a lot of opinions out there. Some come from people who are notable. Some from people who are not so notable. And my job is to try to balance that. I wasn't that effective at it this week. But, you know, I've been I'm 30 days on the job and we'll get -- you know, we'll move forward. And that's what I'm about at this point.

O'DONNELL: He's 30 days on the job, he's says he's made some mistakes. But the bigger question a number of Republicans here in Washington are raising is, there's no political director at the RNC, there's no finance director, that person just recently left. There's almost nobody left at the RNC, except a couple of consultants that are advising Steele. He says he's doing it to clean out the party and restart it anew, but is that part of the problem?

SKALKA: Well, I think part of the problem is that he's show-boating on television instead of doing some of the internal reorganizing that members want to see him doing. You know, he's got a big task ahead of him, from fund-raising to revamping the online operation for the party. There are some pretty -- pretty big tasks ahead and I think there are folks who want him to get to it and stay off the air for now.

O'DONNELL: No doubt, and our poll certainly shows that. Jennifer Skalka, for the Hot Line, thanks so much.

O'DONNELL: And it's the tale of two parties. Our new NBC News/Wall Street Journal poll shows Democrats are winning the public opinion race and Republicans are losing the tug of war, if you will. The president's favoribility is his highest ever, 68%. Two-thirds of Americans are more hopeful about his leadership. 60% approve of his job in the Oval Office, and 49% have a positive view of the Democratic Party. Another near record high. On the flip side, just 26% view the GOP positively. Their all-time low. Respondents blame President Bush and congressional Republicans for the most partisanship in Washington. 56% think the GOP's opposition to Obama is politically motivated. And Republicans lose by nearly 30 percentage points on the question about which party would do a better job of leading the country out of recession. Let's get right to CNBC's John Harwood. John, you're a genius when it comes to the polls. It's pretty bleak for the Republicans right now, isn't it?

JOHN HARWOOD: Well, it's very bleak. And I got to tell you Norah, I don't think this Rush Limbaugh thing could be working out much better from the point of view of the White House and Rush Limbaugh. Just everybody except actual Republican politicians, who've got to get support from voters out there. But look, in these numbers, yes, the Republican Party brand is extremely low. It's rock bottom right now. However, there are also some warning signs for President Obama and his agenda, which may be one of the reasons why they're so eager to talk about Rush Limbaugh. When you ask people in this poll, 'does government do too much or should they do more to solve our problems?,' 51% say government should do more, but 40% say government's doing too much already. You've also got 60% in this poll, 61% actually, saying they're concerned that government's going to spend too much, which is why you saw President Obama out there today with this event about defense contracting, making the point that he's going to clamp down on excessive spending. 'Yes, we're going to spend a lot of money, but I'm going to cut down on waste and make Joe Biden the sheriff,' and all that stuff. So it's a very good time for Barack Obama, generally speaking, but there are some blinking yellow lights there.

O'DONNELL: You know, when you talk about that, it is interesting, 51% want the government to do more. One other thing I thought was interesting, given that there's a health care summit there at the White House tomorrow, that 49% said they're willing to pay higher taxes so everyone can have health care insurance. Seems like a high number to me, except if you look back to the Clinton years, when they tried to do health care reform, and that number was at about 66%. Does that suggest a waning of support? I mean, how would you rate that number, that 49% say 'yeah, I'll pay more taxes'?

HARWOOD: Well, you've also got in the mid-40's people saying they won't. And what I think it tells you is that for all Barack Obama's popularity, which is considerable, he hasn't suspended the laws of polarization in this country. You still have some pretty serious division. Now, Obama's doing well personally among independents, extremely strongly, of course, among Democrats. But he's got some fights here and you look at the reaction of some people to his budget, Olympia Snowe, one of the people that made the difference on the stimulus package, saying that the budget Obama has come out with 'falls woefully short' on the issue of fiscal responsibility. That is another one of these warning signs. He's going to have to get Olympia Snowe, and Susan Collins, and Arlen Specter, and maybe some more people, and a lot more on things like health care, where you're really trying to form a new national consensus. It's not going to be easy. This new President's carved out a very, very large job for himself.

O'DONNELL: And on that, of course, we asked about the current partisanship, or lack of bipartisanship, in Washington, and here's what we found. Only 14% believe there's bipartisan cooperation. 79% say same partisan divide. 29% blame the Republicans for it. 14% blame the Democrats. The President ran on a message of change.

HARWOOD: Exactly. And that's one of the ways, I think, Norah, in which the President's outreach, even if it didn't result in votes, is benefitting him. He is making Republicans look like their playing politics by opposing him, even if they make the argument that they're having principled objections to his plan. But again, the desire for bipartisanship is something that's real, it's been consistent in American politics except when you get to voting time when people do tend to fall, in most cases, along party lines and whether Barack Obama can change that, in terms of the distribution of votes on some of these very contentious issues, energy, health care, reform, entitlement reform, still remains to be seen.

O'DONNELL: Brilliant as always. John Harwood, good to have you on, thanks so much.