CBS’s Smith: McClellan ‘Confirms What A Lot of People Believe’ About Bush Administration 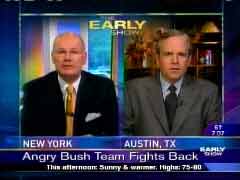 On Thursday’s CBS "Early Show," co-host Harry Smith interviewed former Bush Administration advisor Dan Bartlett about Scott McClellan’s memoir and suggested that McClellan’s harsh criticism: "...actually confirms what a lot of people have come to believe, though, about the Bush Administration, that truth was secondary to policy and politics." On Wednesday, CNN’s John Roberts made a similar observation about the book.

In a report prior to Smith’s interview with Barlett, correspondent Jim Axelrod wondered: "So why would Scott McClellan write a book bound to cut him off from so many old friends?" Axelrod answered his question by playing a clip of former Clinton White House press secretary, Joe Lockhart: "It's setting the record straight, not taking the fall for things he didn't do, not looking like the patsy, but also there -- it strikes me that there's some -- there's some conviction in here that there's information that the public should have had they didn't have and somebody had to tell this story."

Lockhart of course was nobody’s patsy during the Monica Lewinsky scandal, when, as Washington Post reporter Howard Kurtz described:

The Dallas Morning News had just touted a possible White House witness to an encounter between the president and the intern, and Lockhart was harassing the networks that picked it up. He called "Nightline," which reported the administration's denial before signing off. He called CNN reporter John King after the report was mentioned on "Larry King Live." "The story is a piece of [excrement]," Lockhart declared. "Your network is putting it on the air. You can't just pin it on the Dallas Morning News. Your credibility is at stake."

Later in the interview with Bartlett, Smith further emphasized McClellan’s credibility: "Scott McClellan, though, doesn't have all that much to gain, especially in the long run, to betray the White House in the way folks feel like he has...So why would he write the book unless he believes he -- he was deceived himself?" Despite Smith’s claim that McClellan did not "have all that much to gain," at the beginning of the show Smith touted the fact that the book: "...has already skyrocketed to number one on the Amazon best seller list." Apparently the money from book sales is not "all that much."

When Bartlett questioned why McClellan did not speak up as press secretary about problems with the administration, Smith quickly shot him down: "He was a loyalist. He believed in what the Bush Administration was about. He goes all the way back to the governor's mansion, he goes back about as far as you do."

Here is the full transcript of the segment:

HARRY SMITH: This is it [showing book], it has already skyrocketed to number one on the Amazon best seller list. And we're going to talk to former White House counselor Dan Bartlett, a long-time associate of Scott McClellan's, about all of that in just a couple of minutes.

JIM AXELROD: Well, good morning, Harry. Scott McClellan goes way back with George Bush, all the way back to Texas, but this morning it would appear these two men have an irretrievably damaged relationship. This was the president when McClellan announced he'd be leaving.

GEORGE W. BUSH: One of these days he and I are going to be rocking in chairs in Texas talking about the good old days. His time as the press secretary.

AXELROD: That's not a conversation likely to happen now. McClellan, who did so much to sell the Iraq war --

SCOTT MCCLELLAN: The regime certainly had the intent and capability when it comes to weapons of mass destruction.

AXELROD: Writes in his new book that 'the Iraq war was not necessary' and the 'White House was not open and forthright on Iraq.' This morning in Stockholm for an international conference on Iraq, Secretary of State Condoleezza Rice rejected McClellan's allegations.

CONDOLEEZZA RICE: I'm not going to comment on a book that I haven't read. But I will say that the concerns about weapons of mass destruction in Saddam Hussein's Iraq were the fundamental reason for dozens of resolutions within the Security Council from the time that Saddam Hussein was expelled from Kuwait in 1991 up until 2003.

AXELROD: McClellan also clearly feels he was hung out to dry in the Valerie Plame leak case, when he publicly denied Karl Rove and Scooter Libby were involved.

MCCLELLAN: They're good individuals. They're important members of our White House team. And that's why I spoke with them so that I could come back to you and say that they were not involved.

AXELROD: That turned out not to be true. McClellan writes 'top White House officials who knew the truth including Rove, Libby and possibly Vice President Cheney allowed me, even encouraged me, to repeat a lie.' Former colleagues are livid.

ARI FLEISCHER: I think Scott has crossed a Rubicon and is now saying things that -- just hard to understand how somebody who could be the White House spokesman and took the podium and you thought was speaking from the heart could now be saying something so different.

AXELROD: So why would Scott McClellan write a book bound to cut him off from so many old friends? Joe Lockhart, a press secretary for Bill Clinton, has an idea.

JOE LOCKHART: It's setting the record straight, not taking the fall for things he didn't do, not looking like the patsy, but also there -- it strikes me that there's some -- there's some conviction in here that there's information that the public should have had they didn't have and somebody had to tell this story.

AXELROD: You know, I saw Scott McClellan a couple of weeks ago. We chatted about the book that was about to come out at that point. I definitely had a sense that with this book he knew he was walking through a door that he couldn't re-enter, but that with the Bush Administration literally about to be history, he had to get his version out there. Harry.

SMITH: Jim Axelrod in Washington this morning. Thanks so much. Joining us now from Austin, Texas, is Dan Bartlett, former counselor to President Bush. Morning, Dan.

SMITH: As you heard the revelations from this book, were you shocked, surprised, disappointed?

BARTLETT: All of the above, maybe. Very disappointed. Mainly, Harry, because a lot of the things we are now reading in this book from a friend of mine, Scott McClellan, who I worked with for more than a decade, come as a complete surprise. The views that he apparently holds now were ones that he didn't share with any of his colleagues. I'd also have to say that some of the allegations he makes in this book, particularly about the run-up to the war, that propaganda was used and we deliberately misled the American people really, I must say, find quite offensive. Because I was in charge of communications and I would've never participated in a situation where we were knowingly misleading the American people.

SMITH: You know what, though, here's the thing. I think what McClellan wrote actually confirms what a lot of people have come to believe, though, about the Bush Administration, that truth was secondary to policy and politics.

BARTLETT: Well, I disagree with that, Harry. And I think one thing that's got conflated in this debate over the course of many years now is that there's a difference between the intelligence being wrong -- and there were many people who were wrong about it, not just this administration, but the previous administration, other governments -- but now that has been taken into saying we lied about it, that we lied our way to war and that is just patently false. And the thing that's important about -- for people to understand about this book is that he was not involved in a lot of those decisions --

SMITH: Well, a lot of the argument, though, is what the White House chose to believe which -- versus what a lot of other people were saying just happened not to be true.

BARTLETT: Well, Harry, again, I think if you look at the totality of evidence and there's been a lot of investigations, and nobody has concluded in these investigations that there was any direct manipulation or willingly misleading of the American people. At the end of the day, the intelligence was wrong, but people at the time made the best decisions with the information we had at the time.

SMITH: Scott McClellan, though, doesn't have all that much to gain, especially in the long run, to betray the White House in the way folks feel like he has.

BARTLETT: I would agree. I think that this after --

SMITH: So why would he write the book unless he believes he -- he was deceived himself?

BARTLETT: Well, I'm not saying that he doesn't believe it himself now. I'm just perplexed by the fact that he never shared these views with anybody when there was actually an opportunity to do something about it. If he had this -- these many feelings and deep misgivings about the war and about the conduct of the White House, why did he take the job as press secretary? Why did he ask himself to get up every morning and get before the American people --

SMITH: He was a loyalist. He believed in what the Bush Administration was about. He goes all the way back to the governor's mansion, he goes back about as far as you do.

BARTLETT: That's correct. And he's -- and that's why it's all the more shocking that if he had those feelings going all the way back, and if you -- in the book he talks about the positions or decisions the president made early on that he didn't agree with. If this was really a, you know, sticking in his craw, why didn't he say something to somebody? Even privately? And that's the part that I think is the most shocking to many of us who have worked with him for so long.

SMITH: Thanks for taking the time to speak with us.

SMITH: And in a couple of minutes chief Washington correspondent Bob Schieffer analyzes the political fallout from the book and its possible impact on the presidential race. We'll have that in a bit.