Joy Behar Gets Her Joy Back: 'I've Been in a Rage for Four Years...Came This Close to a Dictatorship!' 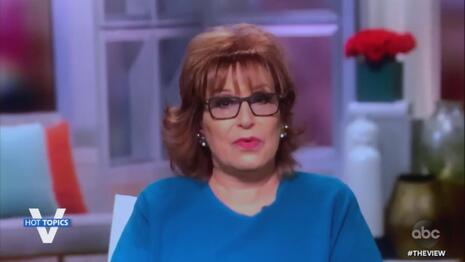 The other co-hosts were overjoyed at the news as well. Ana Navarro in her exuberance, claimed Biden’s appointees, nearly all who worked in the Obama administration, with one even having worked at crazy CNN, were “not political” which is quite laughable:

"Now to the good news, there are some great Biden appointments. So it's refreshing to see people who have such a depth of experience, who are you know, not political, who are not grifters, who are not under investigation!" she gushed.

Trump appointed experienced people in his cabinet as well, but that wasn't a positive talking point from the media back then. Speaking about the DHS head appointee Alejandro Mayorkas (who helped craft Obama’s DACA program), Navarro praised the idea of a more liberal immigration approach: “Oh Hallelujah, we're rid of the Stephen Miller era. I'm so proud of him as an immigrant and as an American, I'm so grateful.”

Joy Behar also revealed she was getting her joy back at Trump leaving the White House in January.

“I’ll go along with all that. I realize I've been in a rage for four years,” she admitted as her co-hosts chuckled. As Whoopi Goldberg teased her, Behar justified her unhealthy paranoia because we were “this close to a dictatorship:”

We came this close. We basically came this close to a dictatorship. I don't think people get that 100%. I'm happy to get rid of people like Stephen Miller and the rest of the cast of the Lord of the Flies. I'm happy to have John Kerry dealing with climate….Now as I grow up and have children and a grandson, I worry about climate change. When I die, that child is going to deal with fires and floods and what have you. It makes my heart feel better that somebody like John Kerry is in there. General Motors is now backing Biden and they’re going to go along with emissions control. These people would be drilling in the middle of Central Park if they could!

She added that she can be happy again: “I'm so relieved and I want my rage to disappear now. I want to be happy. People online are writing to me, ‘Joy, get happy again!’ Well, I'm happy!"

There was, of course, more fawning from Sunny Hostin and Sara Haines over Biden’s picks. Sunny Hostin gushed she was “blown away at the depth of experience” from John Kerry and his pick gave her “a lot of comfort” for the climate, while she also praised the diversity in his cabinet choices.

Co-host Sara Haines was also “really excited” about the female choices, saying “representation is so important.” Yet again, these accolades on firsts and diversity are only allowed for Democrat presidents. No such praise was given to Sarah Huckabee Sanders, who was the first mom to hold the job of White House Press Secretary before Kayleigh McEnany; or more recently, Amy Coney Barrett, the first female Supreme Court Justice with young children. In addition, women made up half of Trump’s White House staff and hundreds held leadership positions in his administration.

Colgate and Carvana sponsored The View. You can contact them at the Conservatives Fight Back links provided.