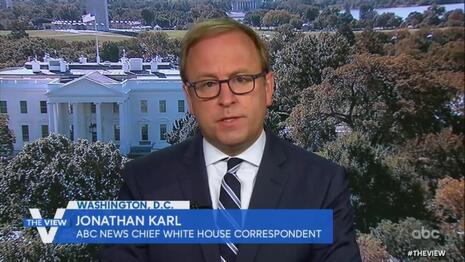 The media will never take any responsibility for why Americans find them so untrustworthy; all they can do is reflexively blame President Trump. ABC’s chief White House correspondent Jonathan Karl perfectly displayed this point while visiting Friday's The View, discussing President Trump’s positive COVID-19 test. He indulged the left-wing hosts’ in stirring up a conspiracy that the White House was lying about President Trump’s health.

After Joy Behar asked Karl what he was hearing from the White House, he touted how they were “rattled” and “really freaked out” by the news. He raised skepticism over the news that the President was experiencing only mild symptoms:

Co-host Sunny Hostin then complained we couldn’t trust the White House physician or anything the administration said about the President’s health:

Jon, you know, I believe firmly that this is a national security risk and issue at this point. So I do think that we need information about the president's health. We know that President Trump has not been transparent about his health in general, and he has admitted that he downplayed this virus so people wouldn't panic. Now does this mean that he will downplay his own symptoms? How can we trust any of the information that is coming out of the White House? I personally would prefer to hear information from doctors. Not necessarily his physician, his personal physician, but maybe physicians at Walter Reed or Dr. Fauci.

Karl agreed, feeding into the idea that the White House was hiding the truth about Trump.

“Sunny, the sad truth is we really can't trust at face value what comes out of the White House on this,” he sighed, adding “there has been so much misinformation that has gone out, you know, about the virus, about the pandemic, about things like voter suppression, it's really hard to know what to believe.”

Karl went on to say that reporters would keep asking questions and verifying the information they’re given. Co-host Ana Navarro raised the point that social media users were concocting their own conspiracy that Trump wasn’t really positive and this was just a “distraction” from his “very, very bad news week.”

Well, you know, Ana, I think that one of the sad things that we have seen happen in our country over the past four or five years is we have seen -- I talk in my book at length about a war on truth that has been waged, to the point where you have -- we've kind of become a nation of conspiracy theorists. You have people who will not believe anything that is coming out of the White House for the reasons that I described, and then you have another part of the country that won't believe anything that they read in a newspaper or see on a show like this, and everybody is skeptical. Everybody is disbelieving. A degree of skepticism is always warranted, but now you have a paint where people just don't know what to believe. So my advice would be listen to what is said, and verify. Go to trusted and reliable sources[.]

But The View hosts weren't finished floating left-wing conspiracies to Karl. Later, Navarro asked if Trump would "stall the election:"

“What do you think this means for the election, for the campaigns? Do you think Trump is going to somehow try to stall the elections and how does the Biden campaign respond? What does it mean for Biden as well?" she asked. However this time, Karl immediately shot that idea down as out of the realm of possibility.

Dove sponsors The View, whom you can contact at the Conservatives Fight Back page linked here.