Sunny Hostin: 'Inappropriate' 'Crass' to Question Biden's Mental Fitness--That's Not What She Said About Trump 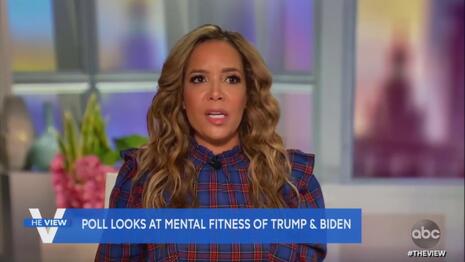 Here's another classic case of hypocrisy from The View.

Co-host Joy Behar opened Friday's show asking her fellow co-hosts if they were concerned about polls showing over 50 percent of voters in swing states are concerned about Joe Biden and Donald Trump's mental fitness for office.

Ana Navarro, a Biden surrogate, showed how she’s living in an alternate reality by touting how "coherent" Biden is (uh, maybe if he can read his teleprompter correctly):

I don't understand how anybody can think there's an equivalence between Joe Biden's mental fitness -- the man is coherent. He's not sending us out to inject bleach into ourselves. He is not holding multi-thousand-people rallies packed like sardines in the middle of a pandemic.

But co-host Sunny Hostin tried to pretend that she was above questioning a politician’s mental fitness, calling it “inappropriate.”

“Well, you know, I'm not a physician, and so I think it's inappropriate to opine about mental fitness. It almost feels crass to me," she stated before going on a rant about all the deaths and racism Trump is supposedly responsible for.

Here’s a Friday flashback from December, 18, 2019’s The View where Hostin spoke about the open letter the rPesident wrote to Nancy Pelosi:

SUNNY HOSTIN: It was very bizarre, and it's on the internet, you know. I hope people will read it. It's six pages. It's single spaced...I read it about, five times and every time I read it, I wear a Fitbit, and my heart kept getting faster and faster, like, my heart rate because it was scary. First I felt pity, then concern and then I got scared.

WHOOPI GOLDBERG: For the country you mean?

The View hosts have vehemently defended Biden's health while they spread their own conspiracies about Trump's health many times before.

The View's double standards for Biden and Trump was paid for by advertisers CarShield and L'Oreal. You can contact them by visiting the Conservatives Fight Back page linked here.