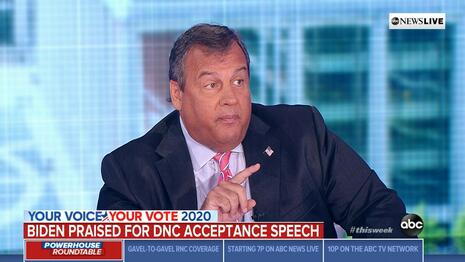 In the hours leading up to the Republican National Convention Monday, ABC journalists were ready with their list of grievances. However, anchor George Stephanopoulos stepped in it during Sunday's This Week, when he went too far defending Democrat nominee Joe Biden, and former New Jersey governor Chris Christie destroyed his Biden narrative with facts.

It started with the ABC anchor dismissing Republicans for calling the Democrat candidate, far-left. Stephanopoulos also asserted that Biden’s competence for the job was no longer in question, simply because he read his acceptance speech without any obvious blunders:

But Christie mocked the media’s notion that reading a teleprompter meant you were ready for the job.

“Well first off, as I said to the other night I don't agree with that issue that it’s put to rest,” he said adding, “Almost anybody can read a teleprompter and I don’t think that passes the qualification for being ready to be president.”

The ABC News political contributor also called out Stephanopoulos for dismissing Biden embracing the radical left of the Democrat party, revealing one of his debate moments:

“I think the way they make the case is to start off with the first democratic primary debate and that tape when they said, do you agree--who on the stage agrees with decriminalizing the border? And every person on that stage including Joe Biden raised his hand,” he noted.

Stephanopoulos tried to keep defending Biden, insisting, “He came out against that!”

“But he raised his hand that night George,” Christie shot back, adding that this is what voters should expect from a Biden presidency:

The argument I'd make if I were the Trump campaign is, don't just worry about the guy in the middle there, worry about all the people around him because that's his cabinet. That’s his cabinet, those are the people who are going to be making policy from day-to-day. That's the Progressive wing of the democratic party and if you support that, great. Go and vote for Joe Biden because that’s what he’s going to give to you. If you’re uneasy about that, you have to look at the alternative.

ABC’s spinning for Joe Biden was paid for by Cascade, Lysol and Ocean Spray. You can tell their advertisers how you feel here.