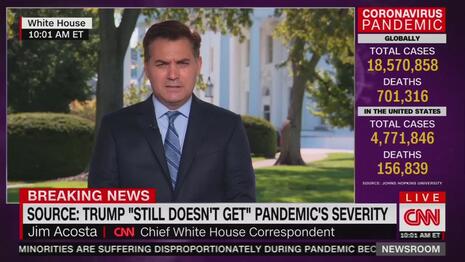 If there ever was a reporter who didn't need an ego boost, it would be CNN’s Jim Acosta. Yet his media colleagues rushed to defend his honor after President Trump called him a "fake reporter" in a Wednesday morning tweet.

So what prompted the tweet from Trump? Well, as CNN often does, they spent Wednesday morning hyping an anonymous source who was trashing the President as incompetent on the coronavirus pandemic. According to Acosta’s report, this source who was “familiar with Trump’s meeting with his coronavirus task force” said, “He still doesn’t get it.” That quote made its way into several CNN reports on Wednesday. After Acosta breathlessly shared this tidbit, Trump immediately shot back at Acosta with this tweet questioning his credibility:

.@CNN has no sources on the Task Force. Their “sources” are made up, pure fiction! Jim Acosta is a Fake reporter!

Of course, Acosta’s equally anti-Trump journalist colleagues covering the White House were eager to defend the CNN hack. CBS’s Weijia Jiang was effusive in her admiration for Acosta:

On top of being a real reporter, @acosta is a gracious colleague. Both at home and on foreign trips with the President, he has stood up for me even though we are technically competitors. https://t.co/EXhBNVCSg3

I can tell you @Acosta definitely has sources on the task force, he has broken stories I have matched and matched stories I have broken from inside that group. No way to do that without real sources. https://t.co/3gR9bSwlKG

This is goofy. As @realDonaldTrump knows, @Acosta is a real reporter with real sources. https://t.co/kiwEn6Dng1

But CNN’s own PR team went over the top with this really unprofessional and petty comeback:

False. @Acosta is a Real reporter with Real sources who talks to members of your Task Force much more often than you do.