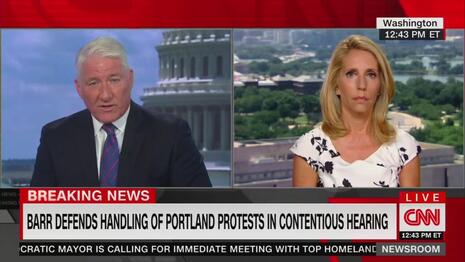 CNN continued to showcase how much they hate Americans knowing the truth on Tuesday, by objecting to Republicans showing footage of the media downplaying the anarchy in Portland to open the House Judiciary Committee hearing today.

After Democrat House committee chairman Jerry Nadler called that violence a “myth” Monday, Rep. Jim Jordan (R-OH) one upped him by playing a video montage of journalists from CNN and other media outlets calling the protests "peaceful" juxtaposed with the actual violence going on in Portland and elsewhere. That ticked off CNN reporters almost as much as it did Jerry Nadler.

During a brief recess, CNN’s John King and Dana Bash broke in to express outrage that "Democrats lost control" by letting the "Trump campaign ad" play. With a straight face, King then used the mother of all euphemisms to describe Antifa rioters and anarchists:

What was striking to me is the Democrats lost a bit of control. This is their hearing, their majority, but right off the top, the ranking Republican member Jim Jordan had essentially, a Trump campaign ad or a Republican campaign ad full of footage of protesters turning into more than protesters and attacking police and the Democrats had no choice because he got to play it to let it go.

Bash was also disappointed their fake "mostly peaceful protest" narrative had been exposed. She tried to discredit the video's content by calling it "carefully crafted and produced:"

Yeah. It was really remarkable. It was very carefully produced and carefully crafted by Jim Jordan and the Republicans on this committee in order to use this as a platform to push the president's campaign strategy and campaign message on law and order and that's how it started in a very vivid way and if you kind of go down the line as we have heard from other Republicans, they, too, are using their question and I, you know, use the term ‘question’ very loosely here and very liberally in order to get the Attorney General to say things that can be used in other campaign ads. Real campaign ads, can be used to help further the president in his campaign on this notion of law and order so they're taking advantage of this as much as maybe even more than Democrats.

Rounding out this hack reporting, was justice correspondent Evan Perez who eagerly told King that Democrats were “getting under Barr’s skin” by painting him as lackey for President Trump. Perez himself was revealed by the Daily Caller in 2017 to be a lackey for Democrats as he reported on their discredited  anti-Trump “dossier” for CNN, while not disclosing his personal relationships with Fusion GPS.

There were no commercials in this hour, but for information on contacting sponsors on this network, go here.