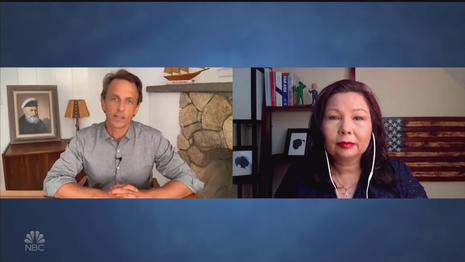 After Senator Tammy Duckworth (D-Il.) told CNN she is open to taking down George Washington statues, and claimed that President Trump praised “dead traitors” in his Mt. Rushmore speech when he was speaking about the country’s Founding Fathers, she faced backlash for those comments, but not from the media. As she’s on Joe Biden’s shortlist for Vice President, the media is now trying to help her clean up those radical comments. Late Wednesday, it was NBC Late Night host Seth Meyers’ turn to act as the Democrat’s publicist, a job he’s well versed in.

Meyers began by asking her about her spat with FNC host Tucker Carlson, who called her a “coward” for refusing to appear on his show without him apologizing to her. Meyers sneered, “What is it like to receive criticism in regards to your courage from someone like Tucker Carlson?”

Duckworth called him a “gnat” that needed to be ignored. Meyers continued auditioning to be Duckworth’s PR spokesman. He invited the Senator to describe how she received her injuries while flying a helicopter in the Illinois National Guard and how Carlson was “not fair” in describing her injuries. From there he baited the Democrat to bash Trash’s handling of the George Floyd protests.

He then set up Duckworth to backtrack from her comments about Trump’s Mount Rushmore speech, which she quickly did:

SETH MEYERS: You know, one of the things you were being attacked for was basically an answer that was taken out of context to make it sound like that you were in favor of tearing down George Washington statues. You know, obviously, people serve from all different political parties. And I think you have every right to disagree with them. I don't think you have any right to question your courage but can you just talk about where you would stand on both the idea of tearing down statues and also people's opinions of those statues?
TAMMY DUCKWORTH: Well, of course I don't support tearing down George Washington's statue no more would I support that than I would having, you know, the purple heart ripped from my chest. The purple heart is a medal that he actually enacted and originated with George Washington. But I do respect people's rights to have their opinion. It's why I was willing to die to defend this country. I was willing to die to defend their rights to have their opinions and people are welcome to do that now, let me make it clear. You know, George Washington is very different than confederates who took arms as traitors against our nation and, again, this is all a way to distract us from the issues at hand: a failed president who continues to speak highly of Vladimir Putin, even after he put bounties on American troops' heads. A failed president, who spoke highly of the communist Chinese and did nothing to stop and fight this pandemic. And now we have 130,000 dead Americans. And the latest projection that I saw today, is maybe as many as 240,000 dead Americans if this virus continues on this path so, don't let them distract you. Don't let them distract us this is about this president failing to do his job as commander in chief and as President of the United States and they want us to be talking about other things...

Duckworth claim that Trump was “distracting” Americans by highlighting the radical left’s attempt to remove and rewrite American history, was brought to you by Verizon. Click on the link to let them know how you feel.