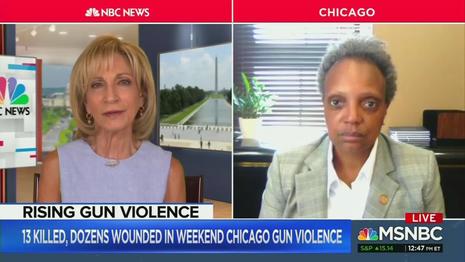 The media continues to tread lightly around Chicago Mayor Lori Lightfoot, carefully avoiding putting any blame on the Democrat for her city’s soaring gun violence. Tuesday afternoon Lightfoot appeared on Andrea Mitchell Reports, where she was not only given a pass, but encouraged to pin the blame on President Trump instead.

“I want to also ask you about the violence this past weekend in Chicago, at least 60 shootings,” host Andrea Mitchell began.

Demonstrating how professional she is, the MSNBC journalist rolled her eyes as she whined that President Trump had compared the murder-torn city to a war-zone:

“The president jumped all over this, comparing it to -- saying the city is worse than Afghanistan,” she complained. The journalist notably didn’t put ANY blame or pressure on Lightfoot, as the leader of her city. Instead she asked sympathetically what her “reaction” was to Trump’s tweet, as she’s “trying to come to grips with all of this.”

Even without being prompted by the media, a Democrat politician’s knee-jerk reaction to any problem they face is to blame the President. So of course Lightfoot took the easy way out that Mitchell so helpfully offered.

To nicely round out her blame-game, Lightfoot even got to make a pitch for Joe Biden:

LIGHTFOOT: Well, look, if you go back over many years, President Trump has said a lot of disparaging things about the city of Chicago. He likes to use us as a political punching bag. But if the president was really committed to helping us deal with our violence, he would do some easy things. One is, he would push for universal background checks. He would push for an assault weapons ban. He would push to make sure that people who were banned from getting on airplanes can't get guns. This is the kind of thing that federal leadership can do. But as long as we are challenged with having states surrounding us, notably Indiana, that has very lax gun laws, where somebody can drive across the border and literally load up a vehicle with military grade weapons and bring them back to the city of Chicago, we're going to continue to be challenged. We're doing an all-hands-on-deck strategy. We're focusing on the root causes of the violence. But fundamentally we have too many illegal guns on our street and that is a direct result of a failure of federal leadership, which is why we need change in November. We need the kind of leadership that Joe Biden is going to bring to our country.

After this, no pushback from Mitchell. “Mayor Lightfoot, thank you very much, thank you, in the midst of everything that’s happening there, to be with us today. We really appreciate it,” she said to close the interview.

Lightfoot was allowed to deflect blame on CNN last week too. As was New York City Mayor Bill de Blasio, whose city saw the worst gun violence in 25 years, the July 4 weekend.