Jimmy Fallon Fawns Over Cuomo: 'Such Amazing Leadership...You Were There For Us When We Needed You' 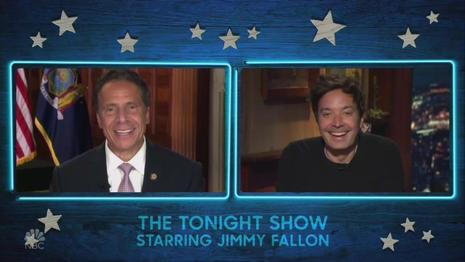 The media is engaging in some real revisionist history now that New York is no longer the country’s epicenter of COVID-19. Despite Governor Andrew Cuomo’s disastrous decision to shuffle infected patients into nursing homes, the Democrat has friends in the media who will spin his bungling decisions as “amazing leadership.” Cuomo received his usual adulation from Tonight Show host Jimmy Fallon Monday night, while being given free rein to tout that his leadership beat the virus.

The late-night talk show host gushed over the Democrat governor’s “amazing leadership” to bring him on the show:

“Governor Andrew Cuomo has shown such amazing leadership in helping guide the great state of New York and all of us New Yorkers through such a tough time,” Fallon gushed.

After that warm welcome, Fallon continued the friendly banter, asking how Cuomo’s family was doing. Apparently that was the cue for Cuomo to start spinning about his handling of the coronavirus. He touted how New York had “tamed the beast” by doing all the “right” things, before fearmongering that other states were going to bring the virus back to New York. A funny way to deflect blame from New York City residents actually being responsible for spreading the virus throughout the country:

Everything is good. We went from hell and back as you know in New York we went Jimmy from having the worst infection rate in the country and we now have the best infection rate. So we really turned the corner and New Yorkers stepped up and they really did the right thing, they did the social distancing and stayed at home, and  we tamed the beast in New York we have to cross our fingers and hope it stays there. The infection is all across the country and it’s going crazy. We're just worried that the infection will come from the other states now back to New York, which would be a real tragedy

If that wasn't bad enough, Fallon gave Cuomo another opportunity to tout how New York did it right, and all the states that reopened earlier, despite much lower infection rates, were wrong.Then The Tonight Show host continued pretending he was Cuomo’s publicist. He praised the Democrat for enacting police reform, before hawking Cuomo’s political posters of New York:

FALLON: You’re getting a lot of praise that you're the first governor to really enact police reform. What can you say about that?

...You're dealing with so much. You've been releasing these posters I want to say, if you don't mind me showing. Here's one you released, basically showing what we're dealing with, it's beautifully drawn and you released a new one today. I heard you had a little help designing this as well?

...Where can people get these posters, by the way? Are they for sale?

Finally Fallon ended the interview with a nauseating question about the Democrat’s love life. The media have embarrassed themselves with these types of questions in multiple interviews:

“I have to ask for a friend, they want to know -- I won't say her name -- she wants to know what phase of dating are you currently in?” he asked as the pair giggled together.

Fallon concluded the interview with some more sentimental flattery: “Thank you so much for your leadership. You were there for us when we needed you, you still are there. Thank you so much to Governor Andrew Cuomo,” he gushed.

This bit of Democrat propaganda was brought to you by Comcast and Walmart.