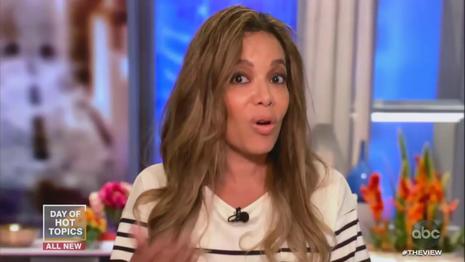 The left has moved on from toppling statues of Confederate generals to now defacing and erasing any person associated with America’s early history. After statues of George Washington and Ulysses S. Grant were vandalized in Baltimore and San Francisco respectively, the Museum of National History decided to remove a statue of Teddy Roosevelt as well. The hosts of The View discussed this trend on Monday’s show, which Sunny Hostin praised as the removal of America’s racist “revisionist history.”

After her co-hosts showed support for the movement, co-host Meghan McCain wondered how far the left would go in trying to remove every mention of American history.  She pointed out that Yale University and the state of New York are named after slave traders, so should we rename those too?

But Sunny Hostin claimed that attitude was a defensive one born out of being taught that you were “superior." She also condemned anyone even owning artwork depicting the Founding Fathers and others:

Hostin seemed to be suggesting it was white Americans who were taught they’re “superior” because before this part above, she said, “I think rather than put up these monuments to these men who may have been, you know, our Founding Fathers, they certainly were flawed men to my ancestors.”

That was her last comment in a rant accusing George Washington of being a racist who “tortured” his slaves:

Well, see, that's the thing. We spent, like, $40 million on these statues. I think that you should spend the money on education because I think that's really what the problem here is. What we have been taught, what you were taught, joy, what I was taught, what Whoopi was taught, probably what Meghan was taught in our schools was you know, revisionist history. We weren't taught the real history. We were taught that George Washington freed his slaves. He wrote that in his will, but he didn't free his slaves. He actually spent the last year of his life relentlessly pursuing slaves that tried to run away. He was a horrible slave owner. He owned hundreds of slaves at his death. They were not released.

We learned he had wooden teeth. He didn't have wooden teeth. He had in his mouth the teeth of his slaves that he had pulled, and made fake dentures, right? Consisting of the teeth of his slaves who he tortured, and so why should there be a monument to George Washington? Because he was a terrible slave owner. While he was a Founding Father, we were---this type of history was hidden from people, and I only learned about it when I took African-American history when I went to college. I learned the same history you learned, Joy, and so I think rather than put up these monuments to these men who may have been, you know, our Founding Fathers, they certainly were flawed men to my ancestors.

Hostin saying Washington personally “tortured” his slaves by pulling their teeth is a gross exaggeration that the historical text does not support. Furthermore, she makes these claims with absolute certainty when even Mount Vernon acknowledges that there isn’t a lot of information to go on with regards to the details of Washington paying for enslaved people's teeth.

Towards the end, McCain asked, “I think the question I have is how far does this go? Are we talking about removing Mount Rushmore if we don't like our Founding Fathers?” she asked.

As Hostin started to answer seemingly in support of removing Mount Rushmore, Whoopi ended the already long conversation to go to commercial.