'View' Brings on Rep. Clyburn to do Damage Control for Biden After His Racist Comments 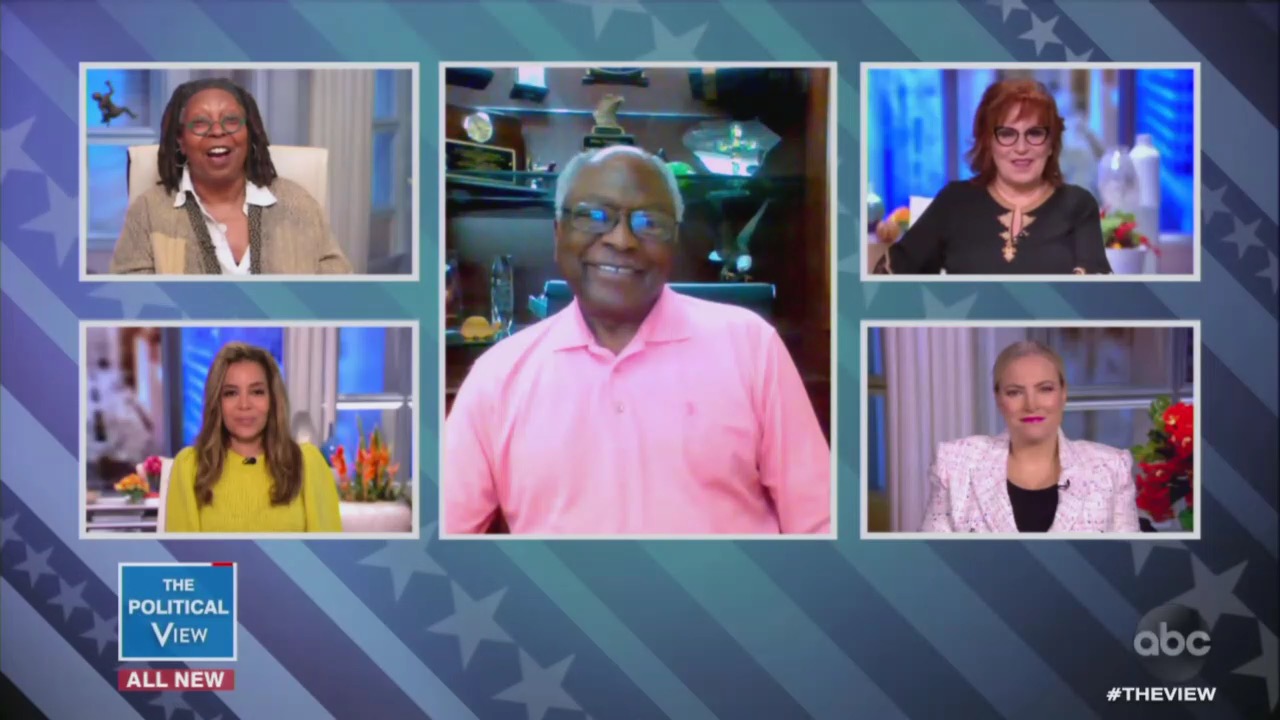 The View protected Democrat presidential candidate Joe Biden for over a month after his former staffer accused him of sexual assault. But after Biden made a racist comment about black voters in an interview last week, the hosts decided to address it and brush it under the rug as quickly as possible, by bringing on a black Democrat ally of Biden’s to do damage control for him.

After playing the interview clip where the former Vice President says if you don’t vote for him, ‘you ain’t black,’ The View co-host Whoopi Goldberg seemed amused. While smiling and chuckling, she downplayed Biden’s comments as just him being too comfortable with his interviewer:

You heard this exchange that was played. I always think it's a mistake when folks go onto shows and think they're home [laughs] they're talking to friends and stuff [laughs] because they just go out on an edge. So when you heard this, [laughs] what was your response to the comments?

Their guest, Rep. James Clyburn (D-S.C.), who provided a key endorsement for Biden back in February, agreed. He went on to defend Biden in the same way that many evangelicals defend President Trump when he says controversial things; that he wasn’t perfect, but they weren’t looking for a Christ-like candidate, anyway:

In this instance, Joe did not do as well as I had hoped in responding, but I will say this. I go about my business every day comparing Joe Biden to the alternative, not the Almighty. He is not a perfect person. None of us are. So my decision now is to determine who I feel should be the next President of the United States and I do that by comparing the candidates to each other, not to the Almighty.

Unfortunately no host noted the irony. Joy Behar went on to spin some more for Biden, and ask Clyburn to again try to win over black voters who were offended by Biden’s racist comment:

So Congressman, Joe Biden said that he shouldn't have -- these are his words in his apology basically. He shouldn't have been so cavalier, he said, during the interview. Like Whoopi says, you know, he was at home, he's talking. He does not take the black vote for granted, he said, so what do you say to African-American voters who feel that they have been offended by this remark? How do you -- what do you say to them?

“Look, he's not a perfect person. All of us have misspoken….So we sometimes say things we do not really mean. They come out a little bit wrong, and that's what happened here. I think all of us know Joe Biden. I've said that. I know him. And he knows me,” Clyburn insisted, even calling out co-host Whoopi Goldberg for having to apologize for her own controversial comments.

It wasn’t all softballs, however. Meghan McCain pressed the Democrat to answer for why Trump received 16% of support from college educated black men in 2016:

Yes, congressman, I wanted to ask you this question. In 2016, 16% of college educated black men voted for president trump, and it seems like in 2020 his campaign is trying to focus on increasing that number. What would you say of those men who think that Trump is more in line with his views on the economy, business, growth and religion?

Clyburn responded that these voters needed to take "a hard look" at Trump’s record and what “they lost” with him as president. After doubling down on his comments that the pandemic was the perfect "opportunity" to force through Democrat health care and education wishlists, he then tried to shame Trump’s black supporters:

"Think about where you were back in 2016, and if you want to be in that same place four years from now, then cast your vote the way you did the last time. Anybody can make a mistake. You've made one. Let's make it right this time," he scolded.

Sunny Hostin also pressed Clyburn, but from the left, demanding he agree with her that Biden has to choose a “woman of color” for his VP pick. To this charge, Clyburn basically contradicted what he said at the start of the interview. He claimed how he is not in the business of telling people what they “must” do:

"Let me tell you, I have a real problem with people telling me what I must do….What a person should do is one thing. What a person must do is something else. So I think we're taking a little too much on to tell a person who he must do,” he retorted.

Uh, isn’t that exactly what Biden did, claiming that Clyburn and others must vote for him or they weren’t really black?