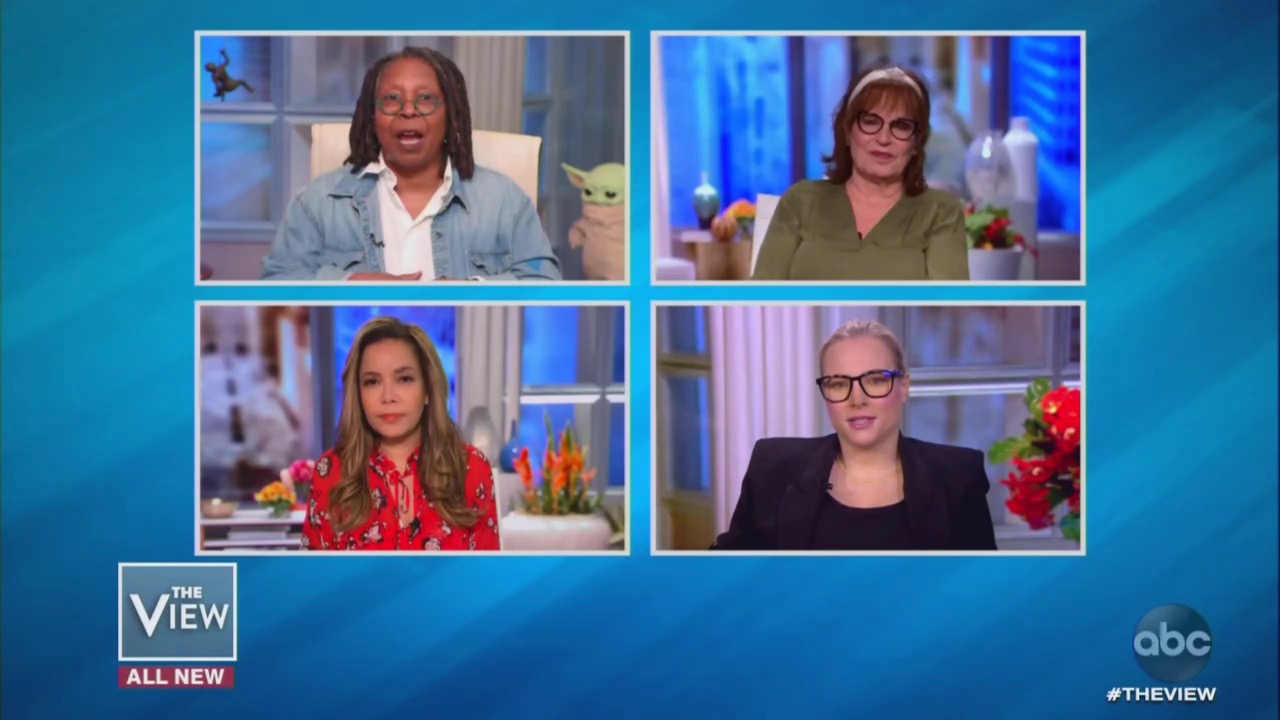 After President Trump shocked reporters Monday by telling them he was taking the prescription drug Hydroxychloroquine as a preventative measure against coronavirus, the media melted down claiming he was giving Americans dangerous medical advice, again. The hosts of The View rushed out with the rest of the media to obsessively condemn the president’s decision. Co-host Joy Behar also attacked a Republican congressman later in the show for admitting he took the drug when he had coronavirus.

But first Behar mocked President Trump for saying he was taking Hydroxychloroquine, which Whoopi hyped had "deadly side effects." Behar claimed this was just a distraction from all the things that “make him look bad":

I just stocked up on Clorox and now he comes up with this. You know, here's the thing. He says he's been on the thing for two and a half weeks or something, but when you read the side effects, psychosis, paranoia, hair loss, I think he's been on it for three and a half years! Seriously, seriously, I think that he's lying. He lies about everything, you know, so I think he's lying.

Later, Behar lied herself, repeating the debunked claim that Trump called the virus a hoax:

BEHAR: But didn't he say that the virus was a hoax in the first place?

BEHAR: Why is he taking anything if the virus is a hoax?

Sunny Hostin, meanwhile, echoed Nancy Pelosi’s nasty comments about Trump being “morbidly obese” and worried that people would be rushing out to buy the prescription drug because Trump claims he takes it:

[A]t his weight, you know, he is obese under the guidelines, because of his age group, he's I believe 73, there are a lot of side effects here and I don't understand why, if he tested negative over and over again for the coronavirus, why he would be taking this medication... The other thing is what about the people now that will rush out to buy that medication or try to attain that medication because the president said he is taking it? What about the people that really need it that suffer from, let's say, lupus? Now there’ll be a shortage...

As per usual, The View is more interested in engaging in hysterics and falsehoods than any objective truth of the matter. Virtually any drug can have serious side effects, but doctors do commonly prescribe this one for autoimmune diseases such as rheumatoid arthritis and lupus and it's considered “well tolerated” enough by the CDC, that they consider it safe enough for pregnant women and nursing mothers to take. The hosts also misled viewers by acting like people can just “rush out and buy” it from a store without a doctor’s consultation and prescription.

Later in the show, Joy Behar insulted Republican congressman Mike Kelly from Pennsylvania for saying his doctor prescribed him Hydroxychloroquine Z-pack to treat coronavirus, after he was diagnosed positive in March. Despite the congressman attesting to the drug seeming to help him recover, Behar claimed no one “with a brain” should take it:

JOY BEHAR: Did you just say that you took the hydroxychloroquine? My sound is a little weird.

BEHAR: Wow! I can't believe anybody with a brain would take that stuff, but you seem like an intelligent guy. You're a representative in Congress. Why would you take that drug? There are terrible consequences!

So there goes the left's “my body, my choice” argument. I guess Behar knows more than this man’s doctor.

The congressman went on to respectfully disagree with Behar, saying there was not a “one size fits all approach” and advocating for each person to listen to their own doctor’s advice on the drug on whether or not it would be beneficial for them if they were to contract the virus.