Defensive Wallace Huffs to Ex-Biden Aide: 'There Is No Obamagate,' 'Made Up' Like 'Tooth Fairy' 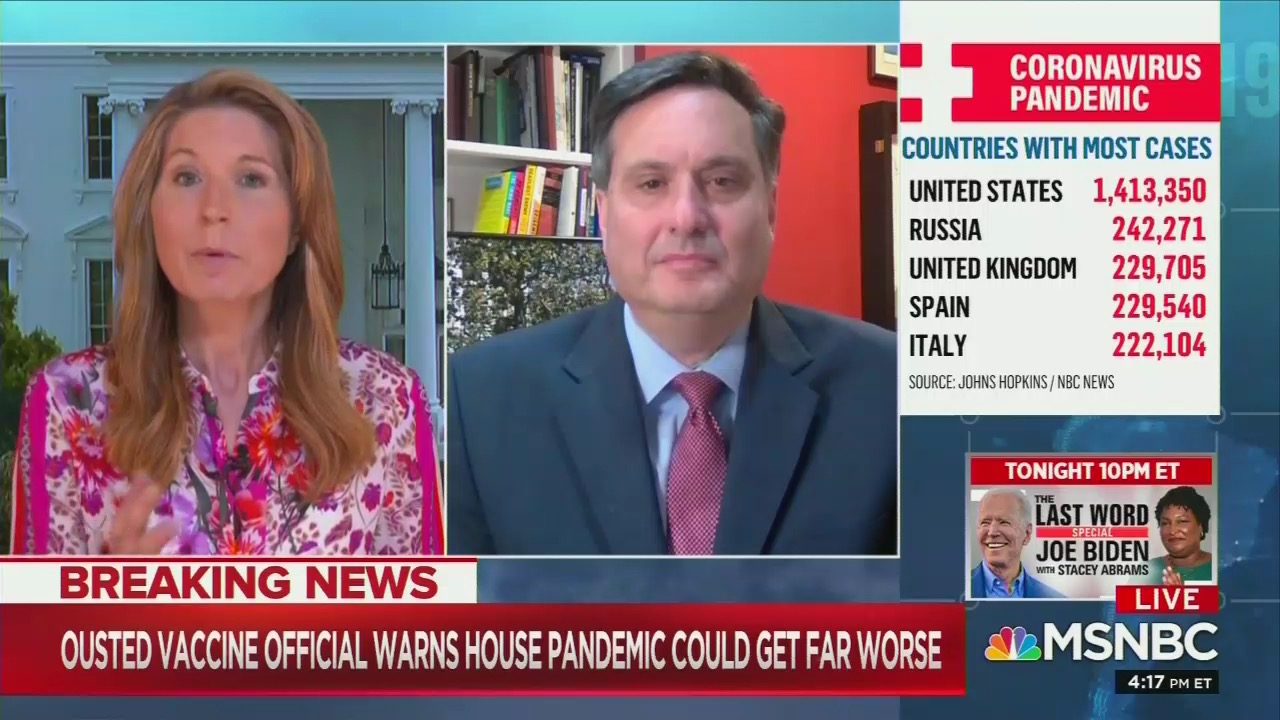 MSNBC hack Nicolle Wallace continued covering for Joe Biden on her show Deadline: White House, Thursday afternoon by completely dismissing the unmasking Flynn scandal as a “made up fantasy” like the “tooth fairy.”

Rather than actually discussing the unmasking document and if it will affect Joe Biden in 2020, Wallace invited her liberal guests, including Biden's former chief of staff, Ron Klain, to trash the document as just President Trump deflecting blame from his coronavirus response. Lacking self awareness, the obtuse Wallace complained to NYT reporter Peter Baker, that Trump was “targeting” President Obama. Baker agreed this was just the president “looking for someone else to blame.” But to her other guest, Ron Klain, Wallace was even more obnoxious in her attacks.

Wallace claimed the whole story was “totally made up” and a “fantasy” like believing in the tooth fairy or Santa Claus:

Ron Klain, I know you’re here for your expertise in public health, but I’ve got to ask you this. I mean, I hear ‘Obamagate’ and I hear, ‘I’m bleeped with my base,’ because there is no ‘Obamagate.’ It’s the political version of the Tooth Fairy. It’s fantasies and fairy tales, and it means nothing. It’s like invoking Santa or something totally made up. So to me, when I hear him use that term, Obamagate, that is groping for the hardcore supporter, which to me screams of real political peril. I mean, if he was in any safer political standing, he wouldn’t still be sucking up to the hardcore base as Peter Baker just described this effort to be about.

Of course Klain agreed, griping “the president is so panicked about his base that he’s making up scandals about his predecessor.” He added that Trump “created” both a giant “health mess and a giant economic mess,” with the coronavirus.

This is the second day in a row that Wallace has brought on former Obama officials to run defense for Joe Biden on the unmasking story.

Despite Wallace’s spin that this was Trump deflecting blame, her quickness to dismiss a legitimate story as a conspiracy theory, plus Joe Biden’s repeated lies that he was in no way involved in the investigation into Michael Flynn, may say more about how worried they are for 2020, than it does about Trump.

See a transcript below:

NY TIMES’ PETER BAKER: They understand that this election this fall is going to turn on the president's response to this virus, and therefore he has to do two things. One, he has to shape the narrative so tbat people believe that his response was adequate and aggressive. That's why you hear phrases like great success story from Jared Kushner and we made all the right moves from the president. The other thing they have to do, as you say, is to find somebody else to blame the fact that there are now 85,000 people dead. 85,000 people, to remind us, is more than we lost in the entire Vietnam War. That was just 8 weeks rather than 8 years. So there are others to blame. There's China and there is plenty of questions to be asked about China's handling of this and whether they were as forthcoming as they should have been and whether they could have done things that would have prevented some of what we saw. There are questions to be asked about others, but you're right, I think he desperately would like to have somebody else to blame. President Obama is this week's favorite target. You see him now talking about President Obama and this Michael Flynn case and the Russia investigations and trying to raise that issue front and center with the phrase Obama-Gate which is ill defined and never really substantiated with anything specific. So it's a Trump strategy to make this a choice between him and the Obama administration now represented by Vice President Biden as the democratic nominee, and rather than a referendum on President Trump and how he has handled this.

NICOLLE WALLACE: I don’t mean to be sarcastic here. But does Donald Trump really think that in any corner of the country that he needs to swing his way again that Obama is less popular or viewed as less competent or anyone thinks that this would have gone down worse on Obama’s watch than his?

BAKER: Yeah, I understand the question. Look, part of this, of course, is who you’re targeting your messaging to. Part of this ‘Obamagate’ and the Obama message is aimed at the core supporters that he wants to keep on his side, that he cannot get to 271 electoral votes unless he starts off with the core voters that he brought to the table. He needs to give them something to focus on other than how he has handled this pandemic because polls show that even a lot of his own supporters have had questions about that, don’t trust the information he’s giving them, have not been happy about some of the delays and other things that have been documented by our colleagues. I think that, therefore, you start with that base and then reaching out to the people in the middle has never really been his top priority. He’s only trying to reproduce the inside strength that he had three and a half years ago, and that’s always been a tough sell for a president who’s never been over 50% in the approval ratings in Gallup and some of these main polls, and it’s always been sort of a tough challenge, and now it’s even tougher given what’s happened these last few weeks.

WALLACE: Ron Klain, I know you’re here for your expertise in public health, but I’ve got to ask you this. I mean, I hear ‘Obamagate’ and I hear, ‘I’m bleeped with my base,’ because there is no ‘Obamagate.’ It’s the political version of the Tooth Fairy. It’s fantasies and fairy tales, and it means nothing. It’s like invoking Santa or something totally made up. So to me, when I hear him use that term, Obamagate, that is groping for the hardcore supporter, which to me screams of real political peril. I mean, if he was in any safer political standing, he wouldn’t still be sucking up to the hardcore base as Peter Baker just described this effort to be about.

RON KLAIN: Yeah Nicolle, I think that’s spot on. There are two political observations to make here. That’s the first one, which is that we’re in mid-May of an election year and if the president is so panicked about his base that he’s making up scandals about his predecessor, that tells you that he’s in trouble because this is the time of the year when incumbent presidents are trying to round up support, not reinforce their base.

The second thing is I think Peter’s analysis of this is right, which is the Trump White House looks at this COVID problem and thinks that they have to either deny that it exists or attack someone for it. I worked for two incumbent presidents, got re-elected. You worked for one who got re-elected. The way incumbent presidents get re-elected is they do a good job. That’s why incumbent presidents win or lose. He can blame a long list of people for this. He can try to beat the CDC to lower the death count, but he can’t change the fact that he now has created a giant health mess and a giant economic mess. The second one, in particular, Nicolle, that economic mess, that is Trump’s strength politically, is people believe he can deliver on the economy. He’s now facing a huge economic crisis. This really goes to competence, and incumbent presidents can’t do a horrible job and get re-elected. That’s what he’s facing.

WALLACE: I will say this, having worked for an incumbent president who stood for reelection. Incumbent presidents running for president, it is always, always a referendum on you. So knock yourself out with the fantasies Mr. President, this will be about you.