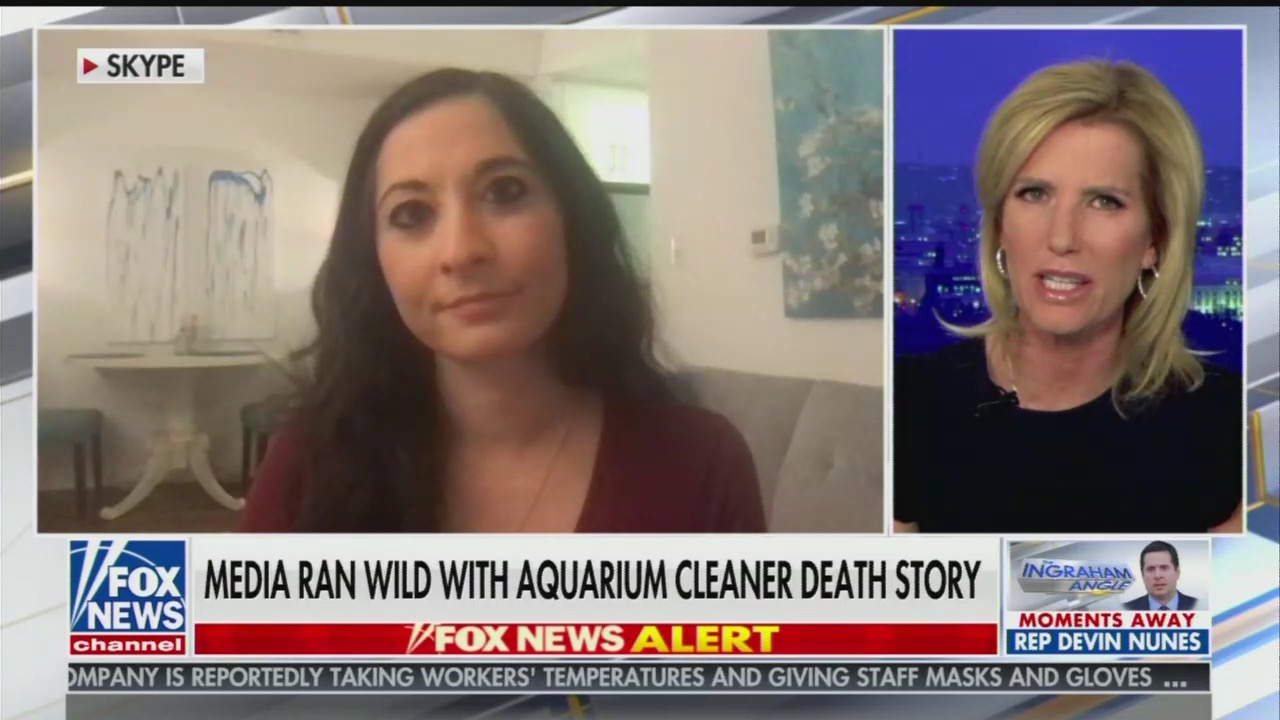 On The Ingraham Angle Wednesday, Fox News host Laura Ingraham blasted the media for blaming President Trump for the bizarre case of a man who died from ingesting fish tank cleaner in March, supposedly thinking it was Hydroxychloroquine. But Ingraham highlighted a recent report in the Washington Free Beacon which found there may be more to this story than initially reported, even as the local police open an investigation.

After playing clips of CNN and MSNBC journalists eagerly blaming Trump for Gary Lenius, of Mesa, Arizona’s death, she sighed, saying, "That is just despicable.”

Ingraham then brought on Free Beacon reporter Alana Goodman, who broke the story the media would not. She looked into Gary and his wife Wanda’s background, conducted interviews with Wanda, Gary’s friends, and found some inconsistencies in the media’s narrative. Her own reporting apparently intrigued the Mesa Police Department, who contacted Goodman to get copies of her interview with Wanda Lenius to use in their active investigation into Gary Lenius’s death.

Goodman told Fox News that friends of Gary were shocked by the nature of his death, because he was an intelligent man and a retired engineer. His wife Wanda’s background proved even more interesting:

GOODMAN: The early reports in the case sounded odd, and we started digging into it to see what we could find. We found that the man's wife was actually a big Democratic donor. She had given thousands of dollars to Democratic causes, and candidates over the last few years, including most recently a pro-science resistance PAC.This raised some questions about her claim that she was going, you know, was she acting on Trump's advice here?...They were also court records that showed his wife was previously charged with domestic violence against him.

Ingraham again hammered home how the media dropped the ball on this story in their eagerness to blame Trump for everything:

INGRAHAM: You’re not legacy media. You have all these investigative reporters for all these big journals and all these big television outfits and it took you kind of digging into this to figure this out. I haven't seen a lot of coverage of this today. This ran- I think this was dominating the news for two days because if they could tag Trump with someone's death due to to Hydroxychloroquine they were going to do it come hell or fish tank water. And that is what they tried to here. Unbelievable.

At the time, the media rushed to blame Trump, as did Wanda Lenius who told NBC News, “Don’t believe anything that the President says and his people because they don't know what they're talking about.”

Immediately after some conservative media outlets reported the Beacon story calling it a "homicide investigation," a spokesman from the Mesa Police Department tried to back away from the murder angle, telling NBC News that while this was “an active, ongoing investigation” being examined by the city’s homicide unit, it was “not being investigated as a homicide.” He added that the unit looks at all deaths in the Mesa area.