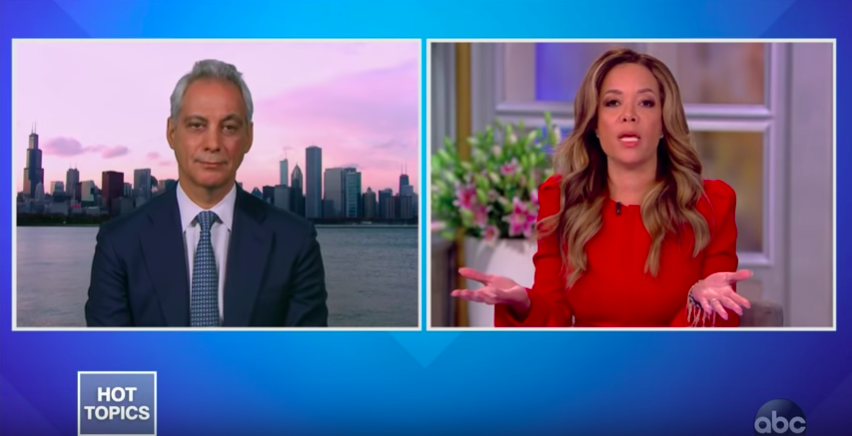 Those in the media suffering from Trump Derangement Syndrome really can’t decide what they want from this administration: One day, it’s more transparency; the next, it’s censorship. The View co-host Sunny Hostin taking a note from The Washington Post’s Margaret Sullivan, argued on Monday’s show that the networks should refuse to air President Trump’s daily press conference updates on the coronavirus because they’re full of “misinformation.”

During a venting session with former Chicago Mayor and Obama Chief of Staff Rahm Emanuel, Hostin urged the networks to refuse to give President Trump airtime to broadcast what his administration was doing to combat the coronavirus spread.

"It seems to me that networks should not even be at this point broadcasting his 90 minutes of misinformation. I understand when Cuomo’s on, that’s one thing, but I just don’t--I almost think it’s a disservice to the country at this point!" Hostin complained.

Her co-host Joy Behar, who was on the show via satellite from her home, agreed, ranting against Trump though it was hard to understand her because the audio was garbled:

“He cannot have his MAGA Trump rallies anymore….So he’s using us instead of the MAGA rallies. So that’s why he makes no sense!” she griped, adding that she’s now “in love” with New York Governor Andrew Cuomo because he’s “brilliant.”

Meanwhile, Emanuel claimed the press conferences should continue to be aired because they revealed Trump’s ineptitude at handling a crisis. “In a moment of a time of a crisis, their character got revealed. That’s what’s going to happen here to this president too. You can’t run away from character,” he scolded.

The hosts started the segment being outraged by President Trump’s scuffle with the egotistical White House press corp last week. After playing a video clip of Trump combatting with NBC reporter Peter Alexander, Hostin rolled her eyes and the other hosts shook their heads in disgust before they began attacking Trump:

BEHAR: What do you expect from this--[shakes head]

HOSTIN: That was kind of shocking to me because it was actually such a softball question.

HAINES: So easy to answer.

Emanuel also bashed Trump for “attacking a journalist” for “doing his job.” Hostin asked him to elaborate on how mayors and governors were doing a better job leading the country right now than President Trump, which served as a way to both attack Trump and for Emanuel to plug his new book.