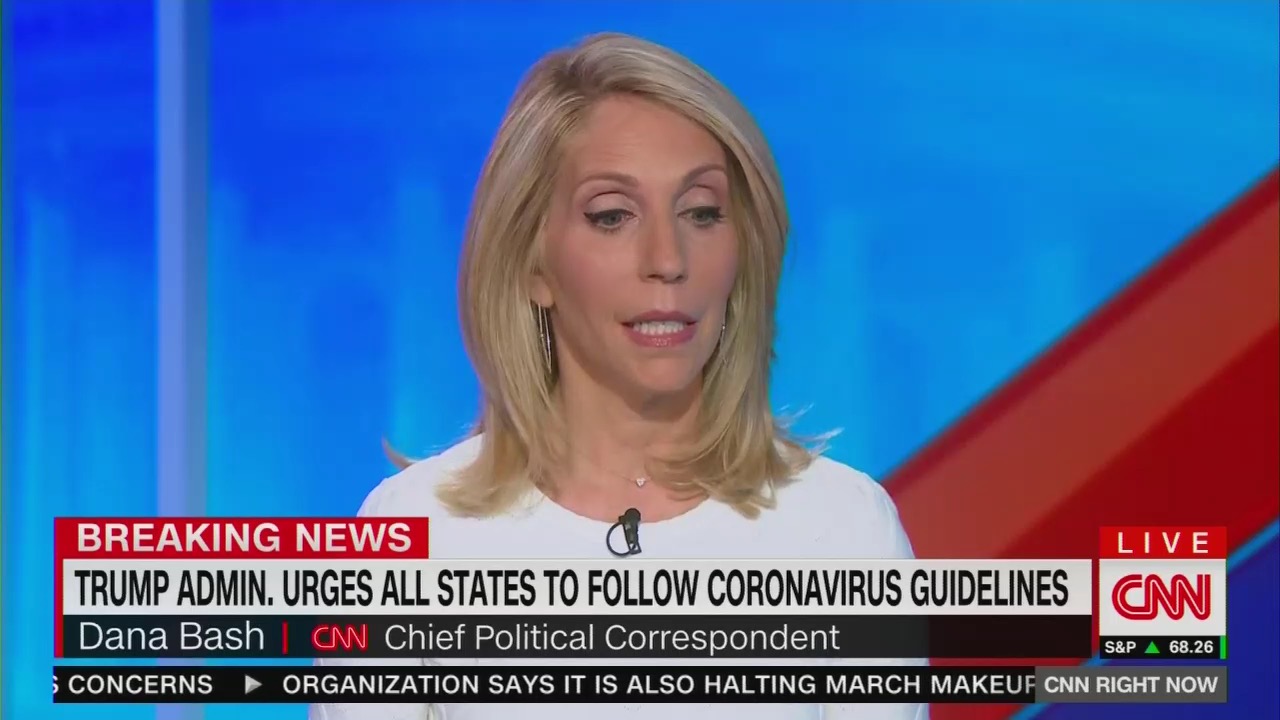 Well this is not something you see very often, or hardly ever, on the rabidly anti-Trump network, CNN. After President Trump and his coronavirus task force team fielded questions from reporters Tuesday over what his administration was doing to combat the coronavirus, CNN's Dana Bash and her liberal peers seemed amazed in its aftermath and actually found some positive things to say about the president.

Shortly after the press conference finished, Inside Politics host John King, chief medical correspondent Dr. Sanjay Gupta and chief White House correspondent John Harwood seemed stunned by what Trump had to say and the measures the government was taking to help protect people. King even managed to offer this tepid compliment: “That was a president who seemed much more up on the brief today than he has been in the past,” he said, adding, “For most of that briefing, the president went out of his way to be more gracious and magnanimous.”

If you look at the big picture, this was remarkable from the President of the United States. This is a non-partisan, this is an important thing to note and applaud from an American standpoint, from a human standpoint. He's being the kind of leader that people need at least in tone today and yesterday. In tone that people need and want and yearn for in times of crisis and uncertainty.

So we have been talking about a lot of specifics that they brought up today whether it's construction companies asking them to give masks to hospitals, the fact that they're thinking about a thousand dollars perhaps, the Andrew Yang idea, to people, but big picture, the fact that the president has been convinced to be different, whether it was Chris Christie’s op-ed asking him to do it or whether it was Newt Gingrich sitting in Italy watching firsthand of what's happening or his friends at Fox News have changed their tone. Probably all the above is what's happened. But It is so important to hear him strike that tone of calm and of understanding of how incredibly dire this is, and the fact that he even said on the notion of people going out, somebody asked about ‘well, what about people of all generations going out when they shouldn’t?’ He said they shouldn’t and they're actually performing self policing. They’re telling--It is peer pressure, telling people not to do it. That's pretty incredible from a guy who a couple of days ago was downplaying it to keep the economy going.

There’s been a pattern of more positive media reports and analysis in the past 24 hours. On Morning Joe Tuesday, co-host Joe Scarborough managed to muster up praise for President Trump, even though it must have pained him.

On Monday night, NBC Nightly News deserves credit as well for trying to calm the public’s fears instead of stoking them about the virus’s impact on the food supply.