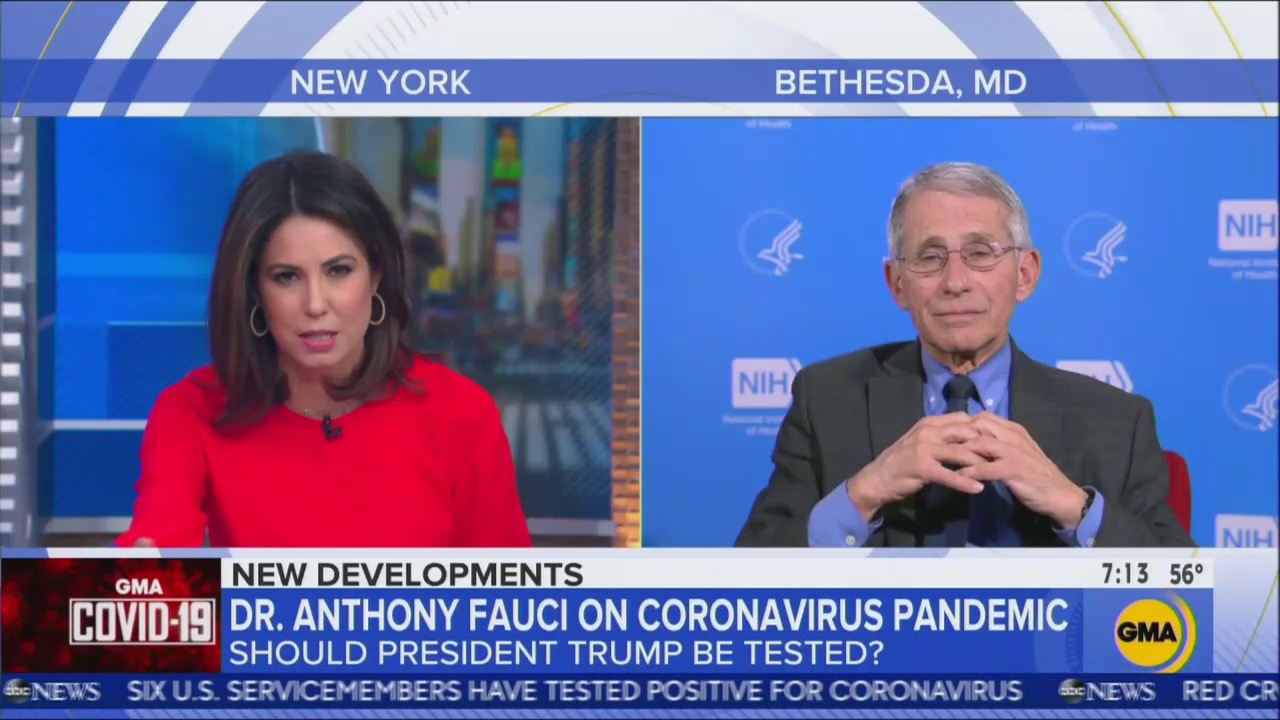 Despite Americans’ real fears about the coronavirus spreading, ABC’s Good Morning America team abandoned any responsibility to try to calm those fears with facts, Friday morning. Instead, co-anchor Cecilia Vega tried to play politics as usual, while speaking with National Institute of Allergy and Infectious Diseases Director Dr. Anthony Fauci, by repeatedly attempting to bait him to bash President Trump.

But Fauci didn’t fall for it, and even gently corrected the reporter’s attempt to politicize the situation.

Although the interview started off with some general questions about what the public should expect with the virus spreading, Vega turned to trying to blame Trump pretty quickly in the interview. It began with Vega suggesting that the government’s slow rollout of testing was the sole reason why the virus was spreading:

“Dr. Fauci are there people who are people walking around right now and have the virus and don't know it because of this lack of testing?” she asked.

Fauci, seeming to see where this was headed and quickly shut the blame game down, pointing out that he wasn’t there to “play Monday morning quarterback”:

Well I'm not so sure it's because of the lack of testing, but I think clearly the system as it was originally designed, was very good for what it was designed. Now looking forward, we’re changing it rapidly, so you know, rather than playing Monday morning quarterback, let’s look ahead. And I believe, what we're hearing at the task force that we are now getting into that phase where we'l really be able to scale it up a lot. So I think in the next week or so, you're going to see an acceleration of availability of tests.

That didn’t stop Vega from getting more pointed, directing her daggers at President Trump. She tried to bait Fauci to correct Trump in her next few questions:

Well, I want to get your take on the messaging from the White House right now because it was just yesterday that President Trump himself said that frankly the testing has been, quote, very smooth. Are Americans getting mixed messages on this front? Is it accurate, Dr. Fauci, to say that the testing has been very smooth?

I'm sure you heard what California’s Governor, Gavin Newsom is saying. Many of the testing kits they're receiving there from the government, are missing key components. He's comparing these testing kits to printers without ink. Isn't that just unacceptable at this stage?

I have to ask you just quickly about President Trump and the photos of him I’m sure you’ve seen of him standing next to the Brazilian official who tested positive. People bear in mind that if you have come into contact with someone who tested positive, that you yourself should be self-monitoring or perhaps in isolation getting tested. Should all those things apply to the president?

Fauci told Vega he “didn’t want to be getting involved in contradicting or not contradicting” the President and he trusted the “extremely competent” White House physician to make those decisions with the president.

“But if you came into contact with someone who was positive, would you yourself get tested?” Vega pressed one last time. Fauci again rejected ABC’s attempt to play politics, answering it would depend on the circumstances.