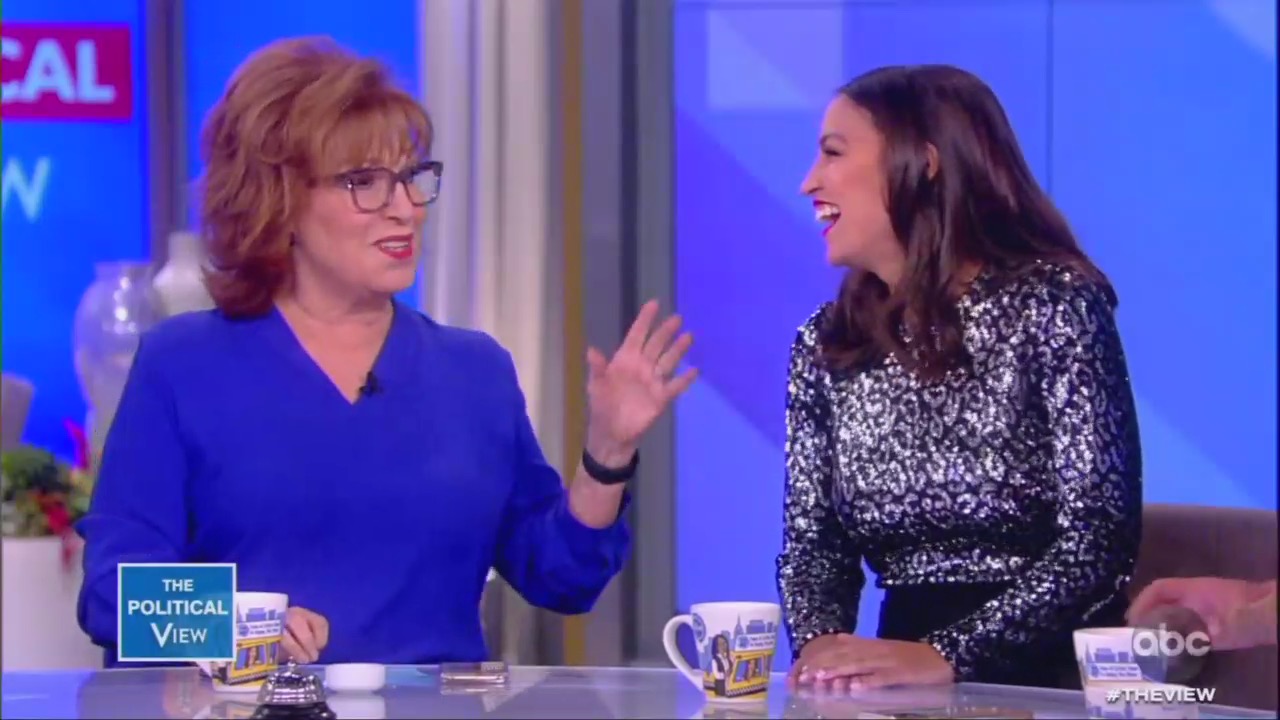 Rep. Alexandria Ocasio-Cortez (D-N.Y.) was on The View Wednesday where she was at first lavished with praise from the hosts but then grilled about her support for Senator Bernie Sanders in the 2020 presidential race.

Co-host Whoopi Goldberg first introduced Ocasio-Cortez as one of the “most talked about and controversial congresswomen,” before Sunny Hostin asked about her endorsing Sanders. “That's a pretty big endorsement coming from you, someone with your influence,” she gushed.

After the congresswoman gave her speech touting Sanders, Joy Behar also went to stroke their guest’s ego, saying she had so much “star” power, it was like she was running in the 2020 election:

JOY BEHAR: Let me talk about you for a second. Because you are a star, yourself. It’s almost like you’re running. The media gives you---

BEHAR: Well yeah, but I’m talking about president. The media gives you a lot of attention and yet you’re very polarizing for some reason. Some people love you and some people don’t love you. I mean, we have that problem ourselves. But since you’re in the---it goes with the territory and we all accept it. But you trigger people. Why do you think you do that and how does it manifest?

Ocasio-Cortez bragged that it was “the apocalypse on Fox News” before she even won, insinuating racism, classism and sexism were to blame for why people didn’t like her:

OCASIO-CORTEZ: I think it's because our political system is not designed for people like us. They're not designed for working people to succeed, for young people, for women, for people of color. It's not particularly welcoming, and historically to have someone like that ascend, especially when I was running against someone who was the antithesis of those things.

BEHAR: To ascend so rapidly.

OCASIO-CORTEZ: Right. It's upending but also I think it's because our entire political system revolves, frankly, around rich men and rich men are not the center of my universe. Working families are. [ Applause ]

BEHAR: You have that in common with Bernie Sanders!

Surprisingly, that was the extent of the flattery the hosts paid to Ocasio-Cortez. Whoopi spent some time grilling Ocasio-Cortez for dissing Nancy Pelosi, saying that the congresswoman seemed ungrateful for her Democrat elders. After they smoothed the waters, the hosts focused their questions on Bernie Sanders, since the congresswoman was now supporting and stumping for him on the campaign trail.

While most of the questions were non-policy related (Bernie bros bullying, Sanders’ medical records) even the liberal hosts had concerns about Sanders trying to abolish private health insurance plans with “Medicare for All.” McCain did question Ocasio-Cortez about Sanders trying to change America into a socialist society, alleging conservatives would be more “comfortable” with a “moderate” like Joe Biden. She and Whoopi also pressed the congresswoman on how Sanders was going to pay for his radical policy plans for health care and education.