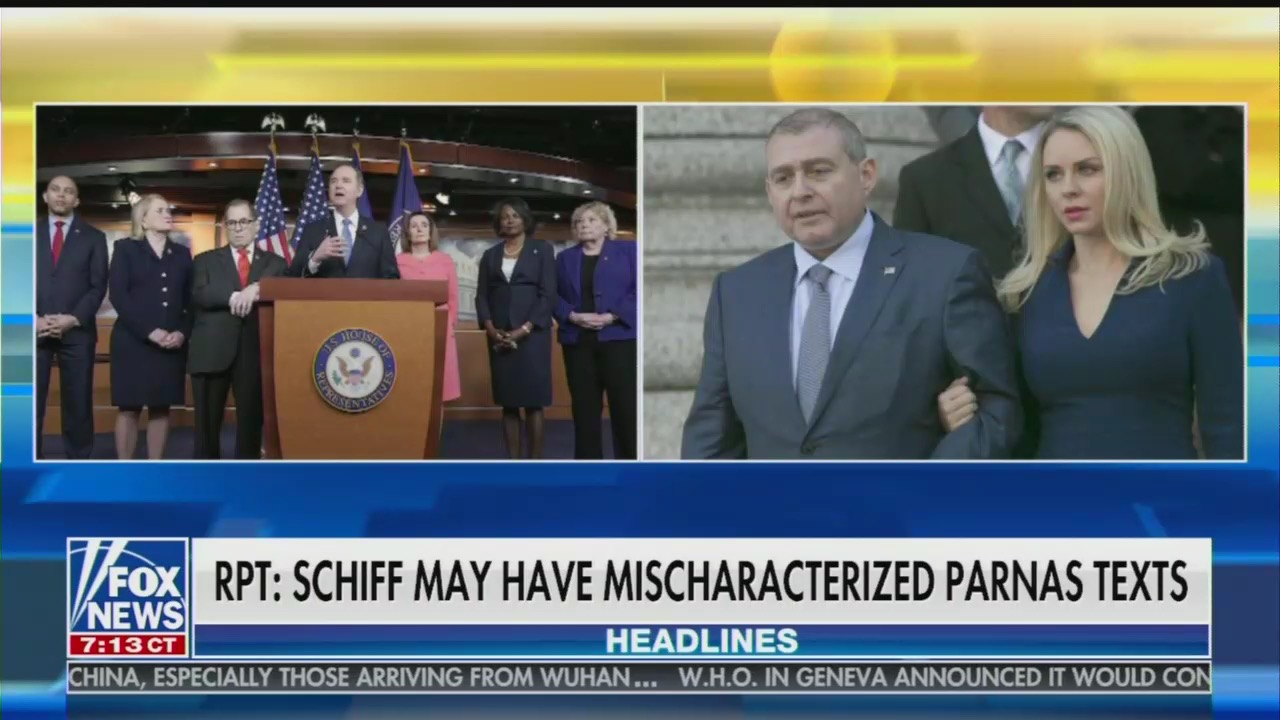 Politico’s Melanie Zenanona reported that Schiff “appears to have mischaracterized a text message exchange” between these “two players in the Ukraine saga.” In a letter Schiff sent to House Judiciary Chairman Jerry Nadler (D-N.Y.) last week, he claimed that Parnas “continued to try to arrange a meeting with President Zelensky.”

Schiff then cites a text message between Parnas and Giuliani talking about “mr. Z” as evidence of that. However the unredacted copy obtained by Politico, reveals that Parnas was clearly referring to the head of Burisma, not Ukrainian President Zelensky:

But an unredacted version of the exchange shows that several days later, Parnas sent Giuliani a word document that appears to show notes from an interview with Mykola Zlochevsky, the founder of Burisma, followed by a text message to Giuliani that states: “mr Z answers my brother.” That suggests Parnas was referring to Zlochevsky not Zelensky.

Politico demonstrates of how further contextual evidence in the exchange confirm “mr. Z” was indeed, Zlochevsky.

Considering the additional context changes the meaning entirely, it at best shows Schiff was shockingly sloppy with his impeachment “evidence.” At worst, it shows he purposefully misrepresented the facts.

Yet the media couldn't be more uninterested.

While the rest of the media was out to lunch, Fox News did cover the story on both their news and opinion shows late Tuesday into Wednesday morning.

Meanwhile, the rest of the media had no problem with Jerry Nadler calling Trump’s legal team, “liars” on the Senate floor. In fact, they celebrated the moment by spending numerous segments confirming that assessment with fact-checks of only one side.

However, Adam Schiff’s repeated pattern of lying about impeachment evidence, Russian collusion, etc. has been downplayed or ignored by the media.

On CNN's New Day Wednesday, correspondent Daniel Dale spent an entire segment fact-checking the “lies” President Trump’s legal team said during yesterday’s hearing. Not one Democrat was fact-checked. On MSNBC at 1am Wednesday, anchor Ali Velshi and former Congressman David Jolly went so far as to smear Trump’s attorney Cipollone as a liar who should be disbarred.