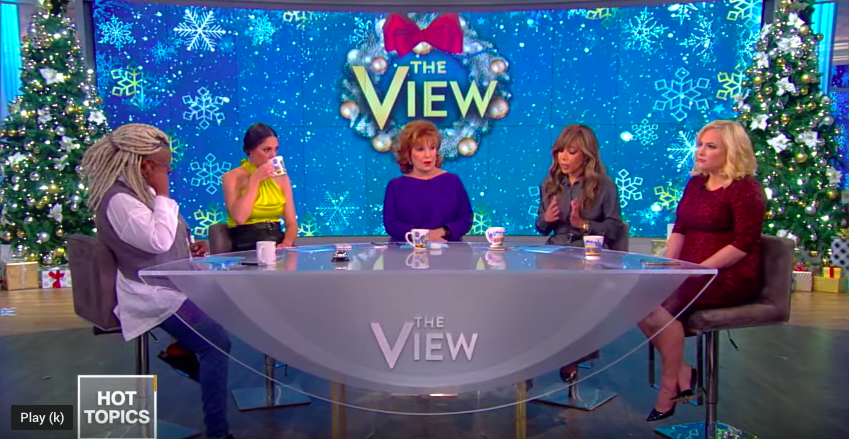 The hosts of The View were all over the map on Monday’s show while discussing the latest strong jobs report that was released Friday. Unable to face facts, the hosts tried to argue the economy was actually a negative for Trump. The liberal hosts suddenly pretended to care about the rising deficit, while at the same time, griping that more money wasn't being put into food stamps. Co-host Joy Behar even suggested that half the country supported impeaching Trump because the economy wasn't benefiting them.

After reading President Trump’s tweet touting the latest report, Whoopi Goldberg immediately tried to stifle the enthusiasm. She rehashed the tired claim that every economic success under President Trump should actually be credited to former President Obama:

“To be clear, you know, economic expansion started in 2009, so you might attribute it to Obama. But You-Know-Who’s taken credit for a whole bunch of this,” she snarked as her co-hosts chuckled.

However, Joy Behar wanted to know “if we were doing so well” why was Trump “cutting food stamps?”

Behar continued with her illogical argument that more jobs, equals more people who need government assistance: “Why not say, ‘Hey, look at how great we’re doing. Let’s help people who are in difficulty.’ Why cut people’s food?” she asked. “It’s pathetic!” she added.

Sunny Hostin agreed that these numbers didn’t tell the truth. “It’s not so great for everyone,” she insisted, suggesting that people living paycheck to paycheck and facing high taxes was unique to the Trump administration.

Suddenly sounding like conservatives, Hostin and Behar fretted about the government spending too much money:

“The deficit, as you mentioned is just mushrooming,” Hostin worried. Behar whined, “Who gets the bill for that? My grandkids?”

Notice she says this just moments after complaining about sensible reforms to massive SNAP spending.

Continuing to pretend they care about federal spending, Hostin even cited the border wall as an expense that our country could not afford:

The hosts did not mention that in 2018, the government spent nearly 68 billion dollars on SNAP alone.

However, Whoopi complained she wasn't getting as much back on her tax returns and that was a sign the economy was bad for everyone:

“The economy may be doing fine, but the American people are not keeping up to the economy,” she said.

As Meghan McCain and Huntsman argued Democrats were ignoring the strong economy as a major factor in the 2020 election, Behar dismissed this notion, snarking that Trump “wasn’t popular.”