House Speaker Nancy Pelosi is receiving rave reviews from the media for angrily lecturing a reporter during a press conference Thursday. That’s right, the same media who hysterically cries the United States is turning into North Korea because President Trump sometimes calls hostile reporters “enemy of the people,” is now lauding a Democrat politician for lashing out at a conservative reporter over his pointed question. 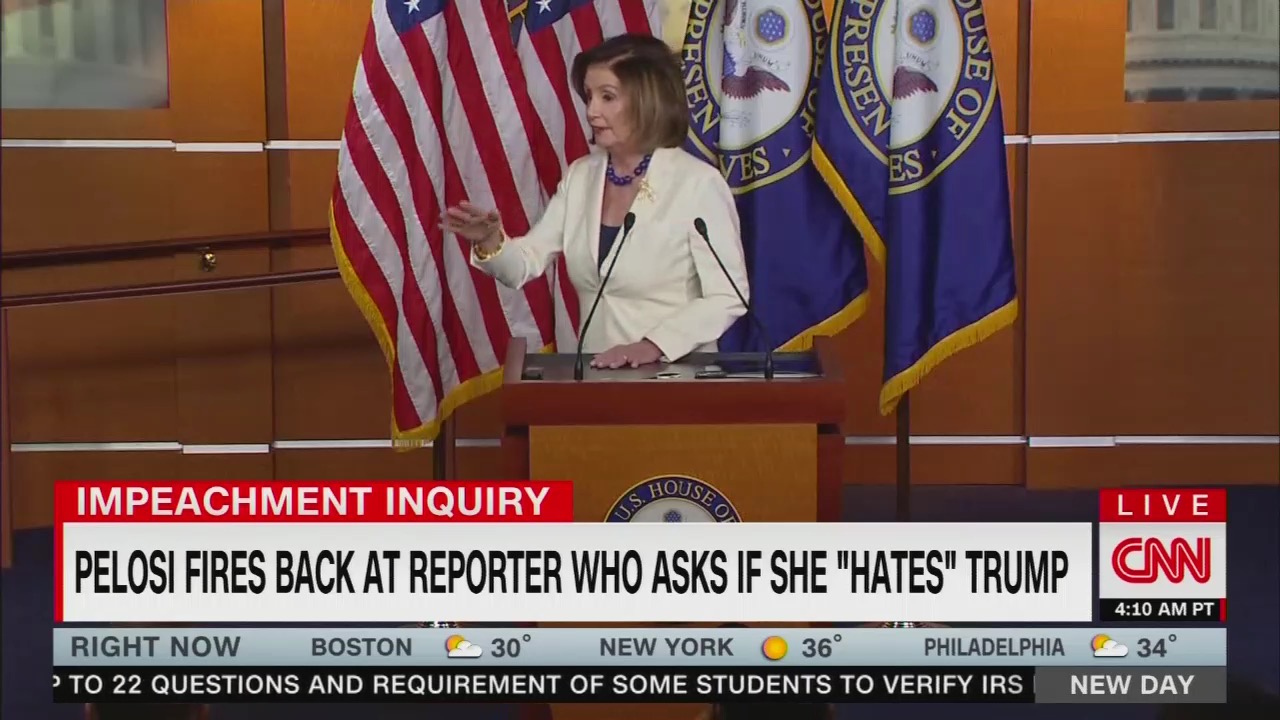 On CNN’s New Day Friday morning, they spent at least two segments praising Pelosi and defending the pro-abortion Democrat as a “devout Catholic.”

During the 7am hour, the network played the clip of Pelosi lecturing Sinclair News reporter James Rosen to not “mess with me” after he asked her if she “hated President Trump,” a reference to what Republican Doug Collins had said during Wednesday, that Democrats were only impeaching Trump because they didn’t “like the guy.”

After playing the clip of angry Pelosi, co-host John Berman responded simply, “Wow.” It was then Chief Legal Analyst Jeffrey Toobin’s turn to be awestruck at the “iconic moment:”

‘Don't mess with me.’ One of the many iconic Nancy Pelosi moments from this period. You know, it wasn't that long ago when there was a rebellion of some Democrats in the House of Representatives to try to get a new Speaker of the House. She has so commanded this process and so much taken charge and so much become even more beloved by Democrats, the idea that there would be any rebellion against her at this point, is pretty laughable.

Berman posed to the panel if yelling at a reporter was the same faux pas as yelling at a voters, as Joe Biden had done, yesterday. Lockhart insisted Pelosi did nothing wrong and had reacted in a “genuine” way at someone attacking her faith. Ironically, Lockhart insisted “You never question someone’s faith,” even though leftists in the media routinely attack conservative Christians as hypocrites who don’t care about migrant children at the border:

You never question someone's faith. You never do that. Paul and I have known Nancy for decades and decades and I know she was a devout Catholic and was being genuine there... And what Rosen's question was you got a raw authentic reaction. You know, I think she would do that again and she'll do it every time someone questions her Catholic faith.

“Absolutely. I loved it. That was Nancy Pelosi at her truest and best!” He gushed, adding, “She's angry with the cheap shot question, but it's really important for those of us who really can't stand the idea of the Trump presidency, that we not fall into that...She is not motivated by hate. And when someone says that, I thought she put him in his place.”

Can you imagine a CNN analyst touting President Trump putting a journalist from any of the liberal outlets, "in his place?"

This isn’t the first time Pelosi has been hostile to Rosen. Just two weeks ago, Pelosi bashed Rosen as “Mr. Republican Talking Points,” at another presser.