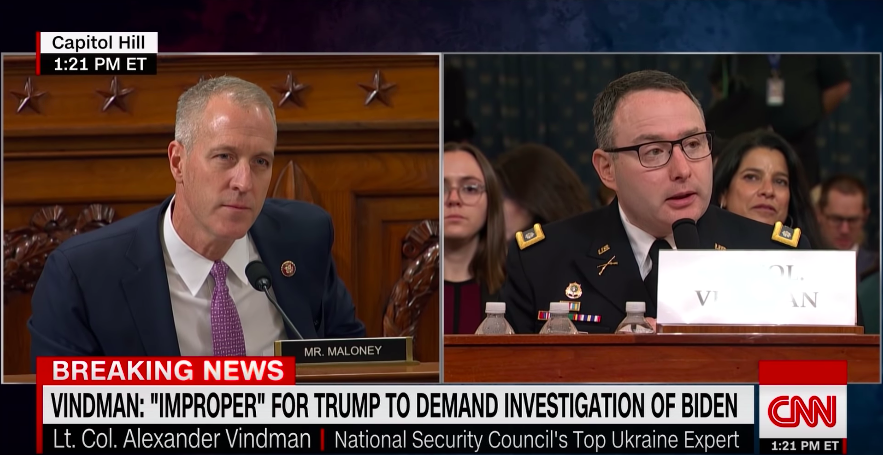 The Democrats’ star witness Tuesday for President Trump’s impeachment hearing has threatened legal action if Fox News does not retract an opinion segment that was critical of him from a few weeks ago.

Lt. Col. Alexander Vindman sent a letter through his lawyer to the news network demanding a "retraction or correction" for an October 28 segment on Laura Ingraham's show. His lawyers charged FNC was “liable for punitive damages” for “false and defamatory allegations it published about LTC Vindman, knowing they were false.” The letter also called out Donald Trump Jr. and FNC host Tucker Carlson for “inflammatory” statements.

The letter was focused on that Oct. 28 show where FNC host Laura Ingraham and guest John Yoo criticized Vindman. The liberal media were predictably outraged and rushed to the Democrats’ witness’s defense.

Fox News responded to Vindman's letter with the following statement: "As a guest on FOX News, John Yoo was responsible for his own sentiments and he has subsequently done interviews to clarify what he meant.”

But the New York Times praised Vindman for “hitting back at the smear campaign against him,” adding:

Much of the right-wing criticism of Colonel Vindman accuses him of being partisan, despite his long career of nonpartisan military service, or that he has divided loyalties, since he immigrated from Ukraine when he was 3.The president himself has suggested that the colonel is a “Never Trumper,” without evidence.

But the media didn’t share this same perspective when President Trump threatened legal action against other cable news networks like CNN, which network called a “desperate PR stunt” that doesn’t “merit a response.” After Trump also threatened to revoke the WH press passes of reporters April Ryan and Jim Acosta, The New York Times went out of its way to defend CNN, whom Acosta and Ryan both work for:

The removal of Mr. Acosta’s credential, after a tense news conference on Wednesday when the CNN correspondent aggressively questioned Mr. Trump, has raised alarms among press freedom groups that say the president is encroaching on journalists’ basic right to cover the government….

...But Mr. Trump’s retaliation against Mr. Acosta, buttressed by a false claim that the correspondent had handled a female White House intern roughly during the news conference on Wednesday, has little precedent in the modern White House.

Mr. Trump, who relishes jousting with reporters, has offered tough words for journalists of all races and genders. In the past few days, though, he has insulted or replied harshly to several African-American women, including Ms. Ryan, Ms. Phillip and Yamiche Alcindor, a White House correspondent for PBS.

The media as a whole have used the “freedom of the press” as a cover for their biased and frequently false reporting about the President. So why aren’t they rallying behind a fellow media outlet for its First Amendment protections?