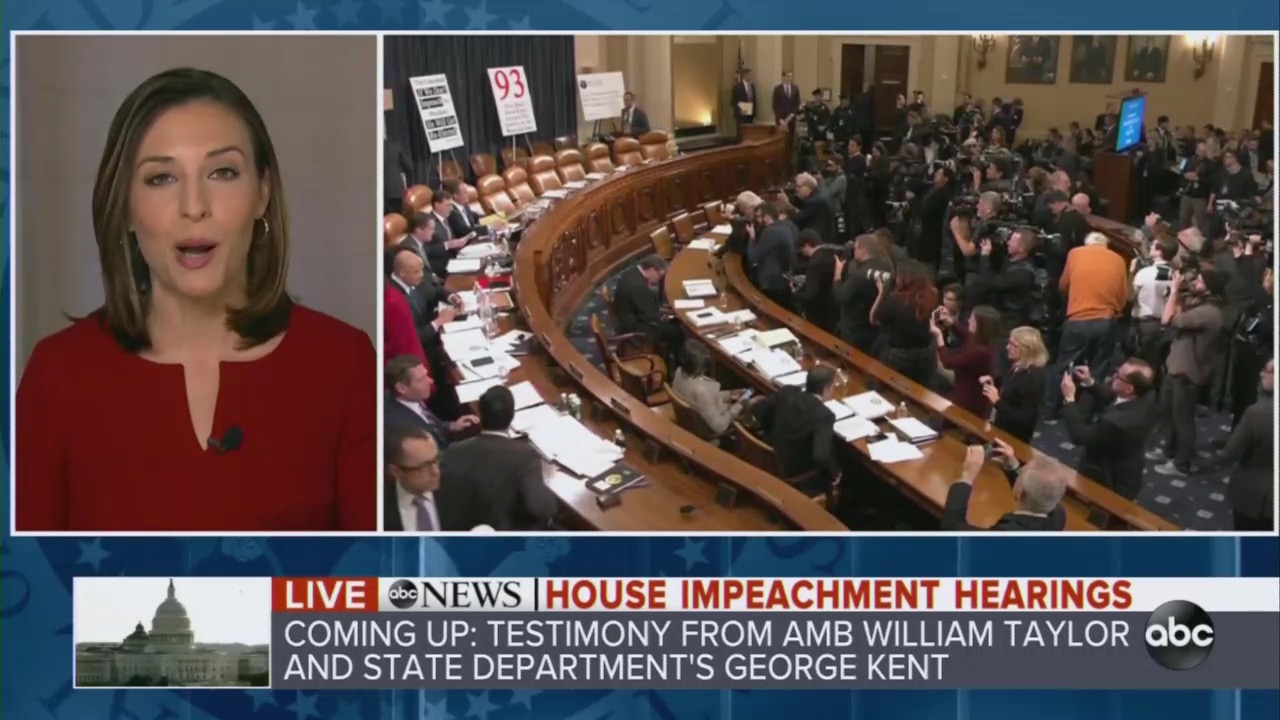 In the minutes before the network’s live coverage started on day one of the impeachment hearings Thursday, ABC was already trying to discredit Republicans and their concerns over the impeachment process as embarrassing "theatrics."

ABC’s congressional correspondent Mary Bruce couldn’t help but get some digs in against Republicans even before the hearing started. To anchor and former Bill Clinton staffer George Stephanopoulos, Bruce slammed the GOP as petty partisans engaging in “theatrics” while the Democrats were the “serious” and “somber” ones in this impeachment inquiry. Mocking Republicans' calls for transparency, she sneered they were “hammering away at their demands” to hear from the whistleblower, even though that demand is “redundant and unnecessary:”

MARY BRUCE: I'm told that Democrats here today are going to be somber, serious and focused and they do believe these are their strongest witnesses and they can attest to the scope and impact of the President’s campaign to pressure Ukraine, and given the fact that both of these officials have worked for both Republicans and Democrats, Democrats feel their character will be hard to impugn, but Republicans have also been preparing, they’ve even been holding mock hearings, honing their defense, and they are going to focus squarely and narrowly on the President’s actions on that phone call with the Ukrainian leader. They will insist there was no pressure, and there was no conditional arrangement, but George, Democrats and witnesses will say that phone call is just part of this story.

STEPHANOPOULOS: Mary, you could see some delays in the proceedings this morning?

BRUCE: George, we are preparing for Republicans to start off this morning, but with a little bit of some theatrics. We are seeing they are preparing some exhibits inside the hearing room just down the hall, and we know Republicans want to hammer away at their demands to also hear from the anonymous whistle-blower who sparked this impeachment inquiry. Democrats of course, have argued that's redundant and unnecessary given what we now know from the other key witnesses. But George you are likely to see a little bit of politics to say the least at play here this morning.

We've seen this whole routine before.

The media pulled this same charade with the Mueller Report, which turned out to be a dud. Any questioning of Mueller and his team or Democrats by the right was met with defensive, angry attacks by the media claiming Republicans didn’t care about the country or the Constitution while Democrats were the patriotic ones.