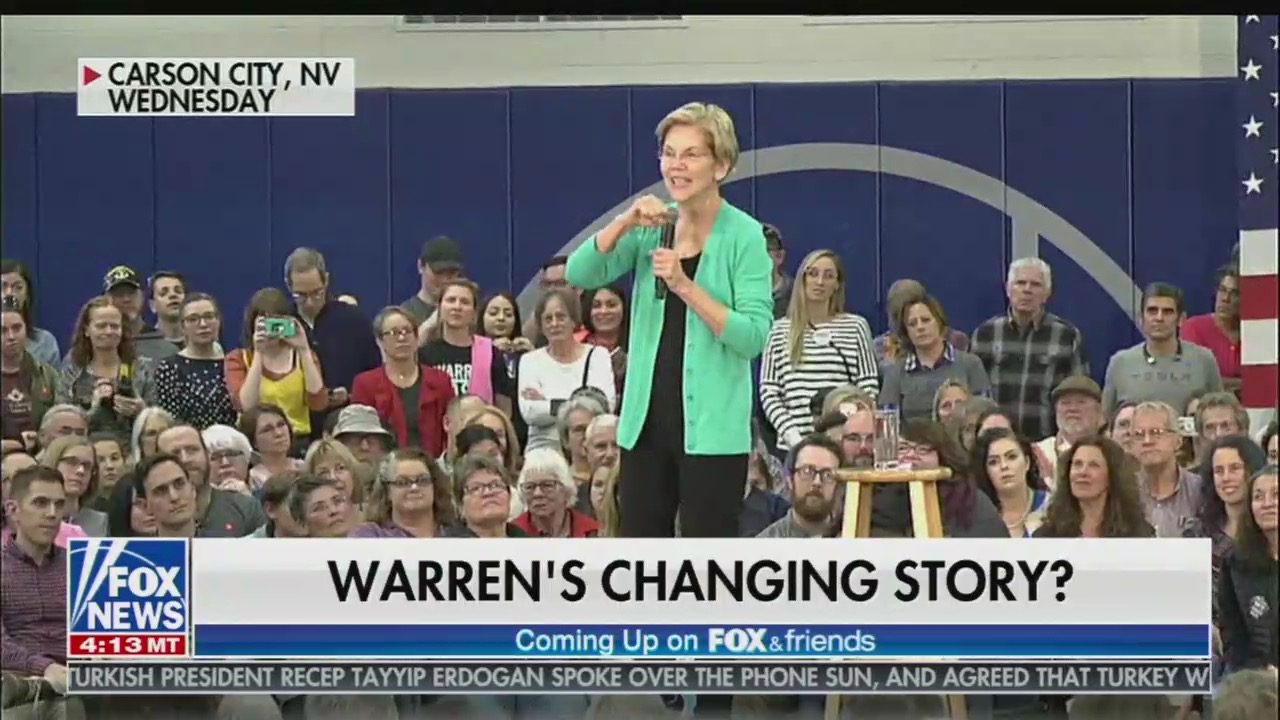 Just like in 2016, the networks have done their best to ignore Democrat presidential candidate scandals and lies while harping on everything surrounding Donald Trump. After capitalizing on her grossly exaggerated Native American ancestry, frontrunner Elizabeth Warren has been caught in another lie, by her own words from twelve years ago. However, you wouldn’t know this if you only watched ABC, NBC and CBS.

In the last several months, Warren has been rehashing a story about how she was fired by a principal ending her first year of teaching, because she was “visibly pregnant,” several times. She told this story half a dozen times (it even made her autobiography), but most recently this past Wednesday. When she told this story at a campaign stop this past May, it couldn't be more clear that she was claiming to be a victim of workplace discrimination:

“I loved it, and I would probably still be doing it today but back in the day, before unions, the principal, by the time we got to the end of the first year, I was visibly pregnant,” Warren said to a room full of teachers and students at a campaign stop in Philadelphia. She added: “And the principal did what principals did in those days: they wished you luck, showed you the door, and hired someone else for the job. And there went my dream.”

However this story caught the attention of Bernie Sanders supporter Meagan Day on Twitter and Jeryl Bier at The Script this week, who both pointed out she told a very different story in 2007. Namely, that Warren was only in a temporary teaching position because she didn’t have the credits and would have to go back to school if she wanted to keep her position. Because of her soon-to-be-born child, she decided it wasn’t a good time and left her job:

[M]y first year post-graduation I worked in a public school system with the children with disabilities. I did that for a year, and then that summer I didn't have the education courses, so I was on an "emergency certificate," it was called. I went back to graduate school and took a couple of courses in education and said, "I don't think this is going to work out for me." I was pregnant with my first baby, so I had a baby and stayed home for a couple of years, and I was really casting about, thinking, "What am I going to do?"

She goes on in that interview to say she applied to law school, instead of continuing her teaching career.

Quite a different scenario, then being a victim of workplace discrimination, according to Warren’s own words.

But you wouldn't hear a peep about this story from the networks. The story has gained a lot of traction in conservative media circles this weekend, but so far the networks have been out to lunch.

It seems their strategy is to ignore as long as possible, then deflect. Once they could no longer downplay or ignore Warren's dubious ancestry claims, they tried to spin her story as bad for Trump, in 2018.

Only Fox News has been covering the story, thus far.