Syrupy CNN: Kamala, a ‘Source of Hope’ for Girls; Rallies Are 'Antidote' to Racism [UPDATED]

UPDATE, 08/30/19, 10:50 a.m. Eastern: Turns out, CNN is really, really desperate to ensure that Kamala Harris becomes the 2020 Democrat who will take on President Donald Trump. Prior to Lah's story airing on Thursday's New Day, it aired on Wednesday's Erin Burnett OutFront. And to make CNN seem even more enthralled with the California Democrat at the expense of her many, many rivals, CNN saw it fit to run it on Thursday's At This Hour and then during the afternoon edition of CNN Newsroom.

Talk about putting their thumbs on the scales of the 2020 Democratic presidential primary. 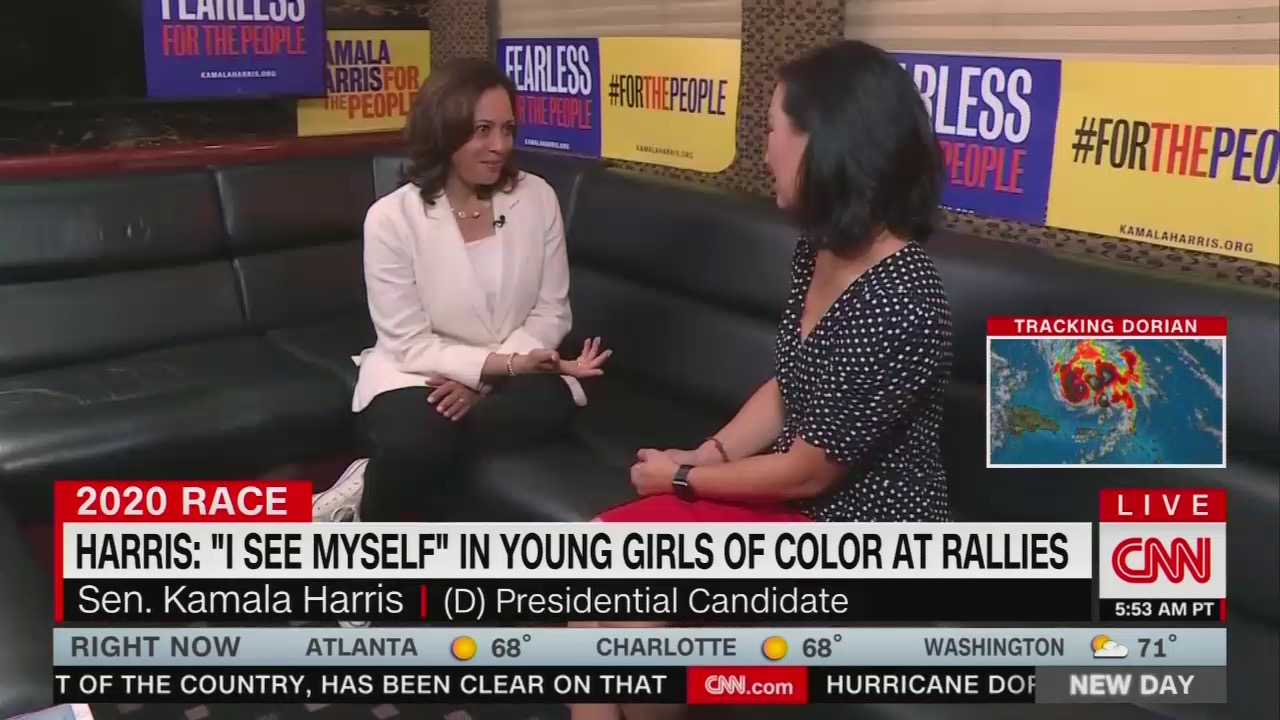 On CNN’s New Day Thursday morning, the network ended the 8am EST hour with a gooey segment hyping Kamala Harris as essentially the next [female] Barack Obama. Correspondent Kyung Lah went to a Harris 2020 rally and spoke only to minority families, touting how girls and families were “inspired” by the biracial Harris, running for President.

Co-host John Berman set up the report hailing Harris as “a woman and a person of color” who “stands out” as “source of hope for the next generation.” He touted the “growing number of minority parents and their children” showing up to support Harris at her family-friendly rallies.

Turning to Lah, a chyron read on screen, “Kamala Harris inspires diverse families on the campaign trail.” In Lah’s video report, she appeared to only speak to minority and biracial families and children, touting supporters’ enthusiasm for having a biracial woman as President, even throwing in some praise for Hillary Clinton and Elizabeth Warren:

KYUNG LAH: Why did you drive two hours to be here?

RALLYGOER: Really I wanted it for her, to see a woman if anything and especially a woman of color run for president.

RALLYGOER: You know, it took 24 years to get to this point for me. And she's only 9, so imagine when she's 24, she's not going to think this abnormal.

LAH: From Davenport, Iowa, to Denver, Colorado, there's a recurring theme among the parents to bring their children to see a biracial woman run for president.

LITTLE GIRL: I feel like it'd be special to see the first female president.

WARREN: I'm running for president because that's what girls do.

LAH: But 11-year-old Skylar sees her reflection in Harris.

Lah wasn’t done plugging Harris. She raved, “It's something Harris knows, why she takes the time especially with children of color.” She followed that up by asking Harris the vapid question, “Win or lose, what does that mean for you?”

Harris was no longer just “inspiring,” she was also the cure to the current administration’s poison, according to Lah:

“In these divided times when children have questions about the news, some parents consider a political rally the antidote,” she gushed, turning to a woman wearing a “Moms Demand Action,” t-shirt. Her husband touted the rally as a way of teaching their biracial son it was “okay to be who he is in this community,” clearly suggesting racism was embraced by the right.

The victimhood beat seems to be Lah's specialty. During the midterms, she hosted a CNN segment smearing Republicans for voter suppression and played up racism charges lobbied by failed Democrat candidate Stacey Abrams. after Clinton’s loss in 2016, Lah lamented the “millions of women” who were “crushed.” Shortly after Trump’s win, the CNN correspondent also reported several stories on how terrified Muslim women were with Trump as President.