ABC Freak Out: Trump 'Running Race-Based Campaign... Redefining Who Gets to be an American’ 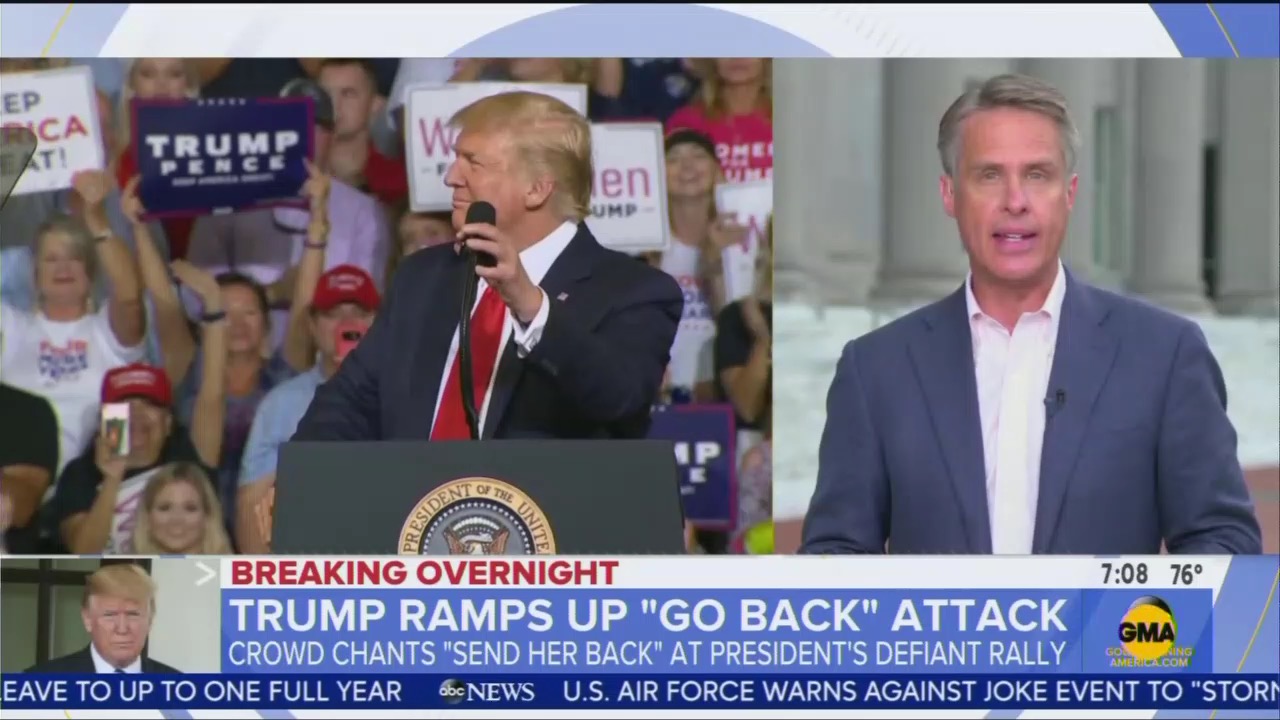 Thursday morning all three networks began their shows expressing disgust at what happened at President Trump’s rally in Greenville, North Carolina last night. At one point, the crowd began to chant “Send her back,” referring to Rep. Ilhan Omar. On ABC’s Good Morning America, anchor George Stephanopoulos dragged out the Richard Nixon comparisons, while correspondent Terry Moran fretted that Trump supporters wanted to control who “gets to be an American.”

On ABC, correspondent Terry Moran opened his report complaining that Trump had “Ignited” a “racial and xenophobic firestorm” with his tweets and his "wild" supporters loved it:

“It was almost as if he was road testing these new themes. Last night the crowd ate them up,” he sneered, adding, "The President's crowds are always enthusiastic but it seemed last night this crowd was even more energized, more wild, revved up by these new attacks."

“[W]e haven't seen this kind of race based campaign, really it has echos of George Wallace and Richard Nixon back in 1968,” he gushed. Moran agreed, calling Trump’s strategy out of the “classic nativist populist playbook.” Taking it a step further, Moran added that Trump and his supporters, were out to “redefine” who gets to be an American:

“[I]t's more than a strategy. They're out to redefine who gets to be an American and that's not based on citizenship but on loyalty as he and they define it,” he lectured.

While the networks were freaking out over Trump, the morning shows on Thursday STILL ignored the fact that members of the far-left “squad,” Congresswomen Alexandria Ocasio-Cortex, Ilhan Omar and Ayanna Pressley have REFUSED to condemn a violent attack on an ICE detention center.

Journalists have raged against any insinuation that these Democrats don’t love America as it currently exists. But when given the opportunity to condone violence, they refused. Isn’t that news, ABC, CBS, and NBC? Not so far.

All three networks ended their reports touting the growing number of Democrats who want to impeach Trump, even though an impeachment bid in the House failed last night.