ABC Still Pining for Kennedy: Imagine What He Could Have Contributed Today! 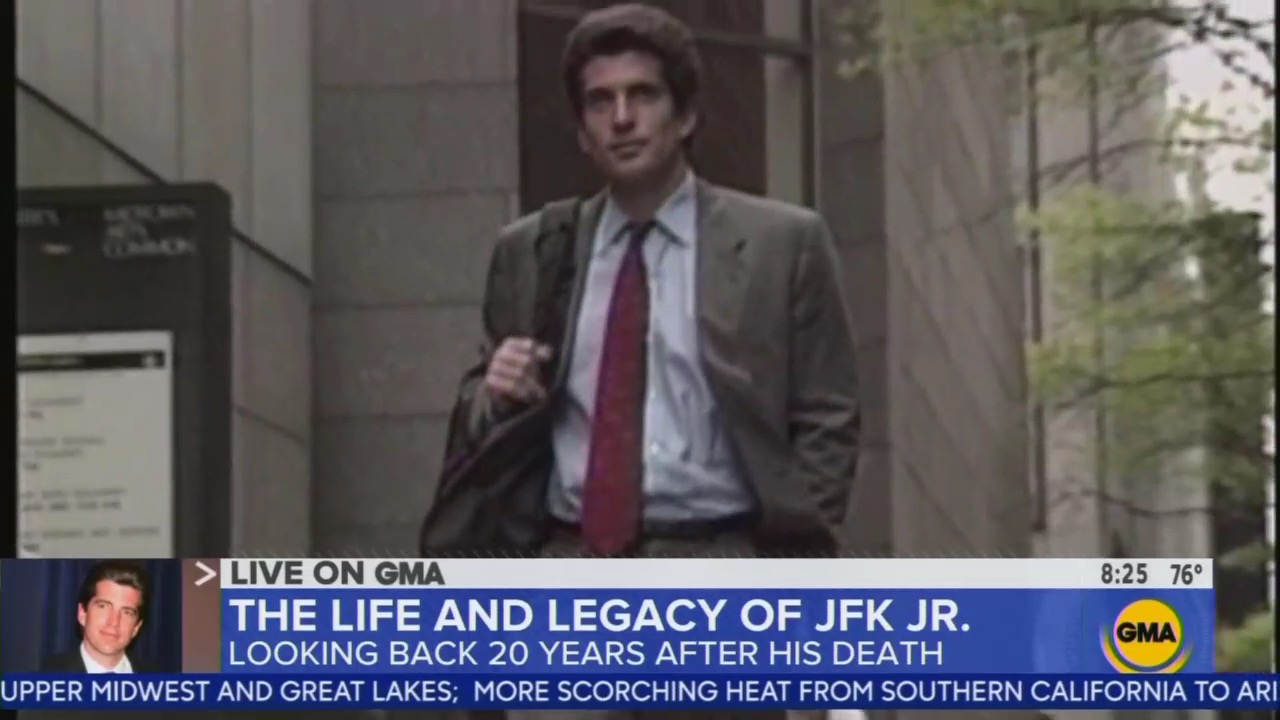 20 years after his death in a plane crash, John F. Kennedy Jr. is still being eulogized by the media as the president they wish they had. ABC’s Amy Robach interviewed his former colleague and friend RoseMarie Terenzio, on her new book out about the late Kennedy, on Good Morning America Tuesday. As usual, ABC’s report was heavy on the “royalty” comparisons, but with President Trump now in office, Robach and her guest made sure to also compare Kennedy favorably to Trump.

Robach opened her report gushing about the “Kennedy dynasty,” calling JFK Jr. “the prince of Camelot:”

They were supposed to be the future of the Kennedy dynasty, John F. Kennedy Jr. And his glamorous wife Carolyn Bessette. John Jr. born into a family synonymous with fame and achievement. The Prince of Camelot forever remembered as the 3-year-old saluting his father's casket, the late President John F. Kennedy Jr..

Turning to Terenzio, Robach fawned over Kennedy’s legacy, and the disappointment that he never got the chance to become a politician like other men in his family:

What do you think he would have wanted his legacy to be?

[W]hat about him becoming a politician? Do you think he would have ended up running for office?

How do you hope people remember him most?

What did he want for this country?

Because the media just can’t help it, Robach tried to subtly contrast the deceased Kennedy with Trump along with her guest, who compared Kennedy to those who “abused the power they had.”

In case there was any doubt as to who they were referring to, Robach immediately tied Terenzio’s “abuse of power” comment to “today’s political climate,” gushing, “imagine what [Kennedy] could have contributed!”

TERENZIO: I think the thing that people should know, remember about him and know about him is that he had this tremendous amount of charisma and power and he carried himself with such grace and such dignity and he never abused the power that he had.

ROBACH: And speaking to today's political climate and the place we're in, you know, I'm sure it's painful but in a way almost hopeful to imagine what he could have contributed. Have you thought about that?

After Robach asked Terenzio what Kennedy “wanted” for America, Terenzio took another jab at Trump and MAGA:

Still fawning, Robach concluded the interview by asking what the dead Kennedy’s “sage advice” and directions would be for us today: