Flashback: John John Was No 'Sun God,' Chappaquiddick Was a Kopechne Tragedy 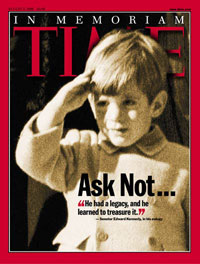 As the media mark the tenth anniversary of the death of John F. Kennedy Jr., it's worth recalling the overwrought coverage of ten years ago. Here is an op-ed by MRC's Brent Baker, originally published in Human Events on August 6, 1999 detailing the media elite's reaction to Kennedy's demise.

The sudden death at too early an age of the only son of an assassinated President is certainly a major news story, but the television networks wouldn't leave it at a few stories reviewing the good works of John F. Kennedy's Jr.'s life. Instead, they used his July 16 death as a chance to launch a week-long tribute to him as America's "crown prince," gushing about the wonderful contributions of the entire Kennedy family, recreating the myth of "Camelot" and praising the achievements of Sen. Ted Kennedy (D.-Mass).

"He laughed off the attempts to elevate his status but, in fact, he was as close to royalty as this country had," declared NBC's Tom Brokaw barely nine hours after the news broke that JFK Jr.'s single-engine plane was missing.

But the networks certainly did "elevate his status" by giving him the royal treatment. As soon as the networks learned on Saturday morning, July 17, that his plane was missing they all went wall-to-wall with live coverage, though they had little new to report as the day progressed. ABC and NBC even shifted their sports programming to sister cable channels. That night ABC, CBS and NBC rushed to produce prime time specials.

Coverage of all other news was suspended for the weekend with the near-totality of both Saturday and Sunday programs devoted to Kennedy. Over the first six days the ABC, CBS and NBC evening shows ran an incredible 131 stories, 27% more than after Princess Diana's 1997 death, the Center for Media and Public Affairs reported.

From Monday through Friday (July 19-23), by the Media Research Center's count, the three morning shows featured 72 interview segments related to JFK Jr.'s passing, an average of almost five per day on each show not even counting all the news stories. That compares to a grand total of six morning-show interview segments so far this year with officials about Chinese espionage or the Cox Report.

These numbers don't even touch the all-day coverage featured by the three cable news channels with anchors and guests sitting all day and night outside the Kennedy compound. By Tuesday, four days into the story, MSNBC was interviewing JFK Jr.'s soccer coach from his days at Brown University.

That first weekend, journalists were not concerned about going overboard. Sunday morning on CNN, Washington Post media reporter Howard Kurtz proclaimed, "I'm not sure a story like this can be overcovered." Indeed, minutes earlier Brian Kelly of U.S. News & World Report had conceded to Kurtz, "You suspend normal news judgment, I think, when you're dealing with Kennedys."

NBC's Tom Brokaw adopted John F. Kennedy Jr. for all of us, asserting on July 19: "At his father's funeral young John became America's child when he saluted his father's passing casket." Dan Rather dubbed him "America's son." That morning Today co-host Matt Lauer reminisced: "For many of us, this weekend evoked memories of two summers ago and another death, Diana, Princess of Wales. She was an actual princess. JFK Jr. was the closest thing this country had to a prince."

Time readers were greeted with this headline spread over several pages of photos: "He Was America's Prince . . . An Icon of Both Magic and Grief . . . Who Flew His Own Course to . . . the Lost Horizon."

By week's end JFK Jr. had been enlarged into a "Sun God." On the July 23 "Dateline NBC," Newsweek's Alter bemoaned how "the star power" of the family is now "diminished" as "John Kennedy Jr. was the Sun God, the most charismatic of any of the Kennedy children."

The TV talking heads used the tragic death as an opportunity to revive dreams about "Camelot" and how everyone considers the Kennedys to be America's Royal Family. The usually more circumspect Jeff Greenfield of CNN endorsed the caricature: "It's been decades since the label of 'Our Royal Family' was applied to the Kennedys. But now with another generation climbing the political ladder with another unbelievable meeting of joy and sorrow, this may be one of the rare times when a manufactured media label may actually be close to the mark."

Live from Hyannisport on July 19 NBC's Katie Couric treated "Camelot" as a reality, lamenting: "With the death of JFK Jr., there is now only one survivor of Camelot. That, of course, is Caroline Kennedy, the little girl who walked her father to the Oval Office and rode a pony on the White House lawn. And now grown up with a family of her own, Caroline remains our only link to those golden years."

The next night CNN's Jeff Greenfield returned to explain the embrace of the entire the family: "I think the massive national guilt that was felt about the fact that the President of the United States was murdered in broad daylight, kind of turned the Kennedys into this family that was taken into the national bosom."

No one, however, could out-emote Dan Rather. Saturday afternoon during live coverage he maintained that the Kennedy family story "is the kind of thing that made Greek mythology survive through the ages." Two days later he wrapped up "48 Hours" by extolling the family's legacy, "the Kennedy mystique, or as some call it, the Kennedy myth."

Rather explained, "The dictionary defines mystique as 'an aura of heightened meaning surrounding something to which special power or mystery is given.' A myth is 'a traditional story dealing with ancestors or heroes,' a story that 'shapes the world view of a people or delineates the customs or ideals of a society.' By those definitions, like it or not, there is a Kennedy mystique and their history is mythic." Rather oozed, "Some of the aching grief the family feels tonight we feel because the mystique and the myth are deep within us."

That same Saturday afternoon Dan Rather placed Chappaquiddick amongst the "one tragedy after another for the Kennedy family."

It would have been more accurate to call it a tragedy for the Kopechne family.

As the week progressed the media grew more impressed with Kennedy's record. It's one thing to admire the Senator for his personal strength in seeing his family through deaths, but quite another to do as reporters soon did as they glorified his ideological causes, political acumen and inspirational leadership.

When the August 2 editions of the news weeklies arrived they were packed with gushing profiles of Ted Kennedy. "He will be remembered in both parties as one of the giants of the postwar U.S. Senate," radiated Newsweek's Alter.

Over in Time, Margaret Carlson extolled how he cares about the little guy. "If his private life is shaped by his love for children and stepchildren," wrote Carlson, "his public one is still shaped by his concern for the little guy, the one who parks your car, rings the cash register at the convenience store, catches the early bus. As he left town he was trying to expand health care, and when he comes back from burying his nephew, he will be fighting to raise the minimum wage."

Fifteen pages later, under the headline "The Senate's Achiever," Time excerpted New York Times reporter Adam Clymer's upcoming biography of the Senator. The selection began with a piece of moral equivalency. "It is the fate of Ted Kennedy," wrote Clymer, "that his failures outside the Senate have always drawn more public attention than his successes inside it. Millions of Americans . . . know what Chappaquiddick or Palm Beach stands for in the Kennedy story. They don't know that elderly people who receive Meals on Wheels owe him, as do the children who read to them through national service programs."

Clymer added, "Yet his achievements as a Senator have towered over his time, changing the lives of far more Americans than remember the name Mary Jo Kopechne." Maybe that's because the media spent another week trying to revive the liberal Kennedy myth rather than reporting what happened and displaying some reasonable judgment about what should be considered news.