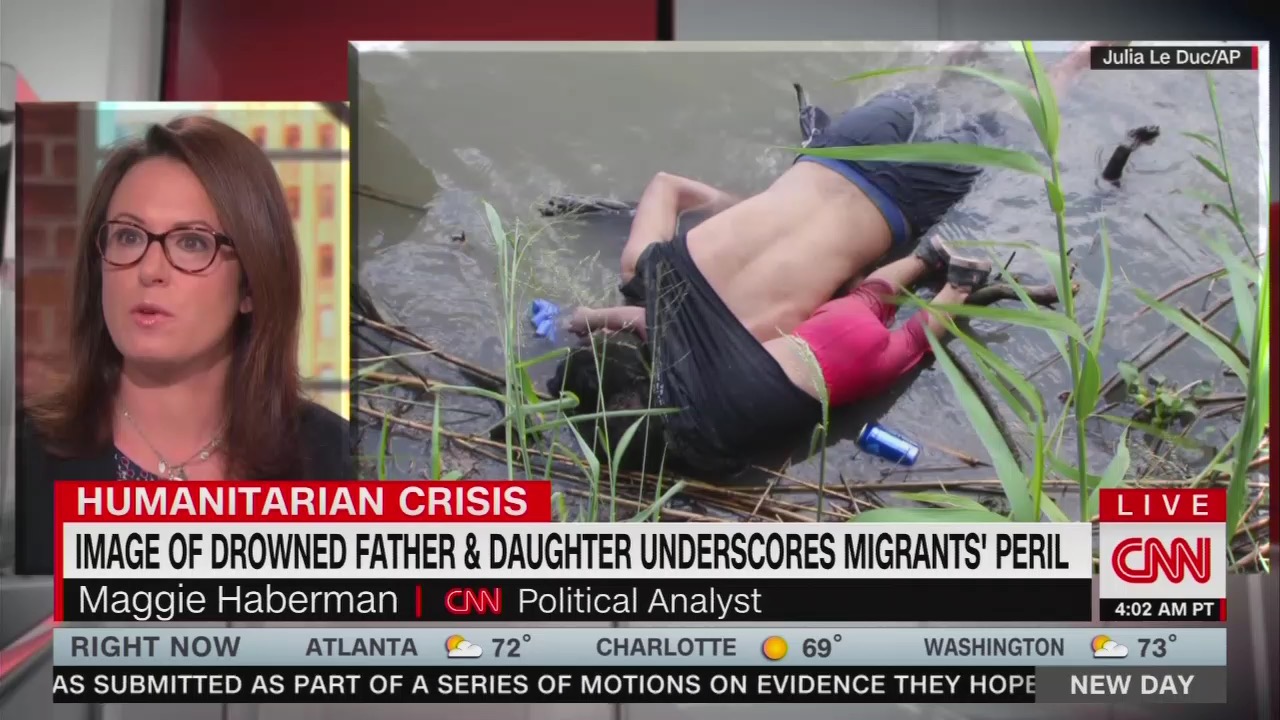 Like the rest of the media, CNN heavily hyped a tragic image of a drowned father and daughter trying to cross the Rio Grande river to enter the country illegally. On CNN’s New Day Wednesday morning, host Alisyn Camerota and John Berman brought on legal analyst Jeffrey Toobin and the New York Times’ Maggie Haberman, to pre-emptively condemn Trump for comments he hasn’t even made yet and bash him as responsible for the pair’s deaths.

Camerota turned to Haberman, scoffing that Trump’s response to the photo was certain to be callous:

Let's just start with the picture of the baby. Maggie, I assume that when we hear from the President he will say something like this is a tragedy but we warned people! This is what happens when you risk taking your 2-year-old to the United States outside of the legal system.

“Right. I think you will hear something along those lines,” Haberman agreed, adding that this family was waiting in the asylum system, which the Trump administration was trying to “slow down” so essentially it was Trump’s fault. She added that Trump will be “triggered” by the image and lash out at Democrats:

They were waiting for awhile. It was blisteringly hot. They grew frantic, it sounds like, and tried to get across another way. I do think you're going to hear the President essentially this is not his fault. That there has been warning to other people not to do this. He is very triggered by images. And I think that other people will be very triggered by what is an awful, awful, awful picture. So it's possible he will have a different response. But I think what you described is certainly what his immediate response will be.

After that, CNN’s chief legal analyst Jeffrey Toobin slammed Trump for “lying” by saying Democrats were responsible (even though they held up funding for the detention centers):

I think the other thing that is likely particularly from the President in response to this is simply to lie and simply to say the situation was the Democrats' fault entirely. That the situation was worse under President Obama. All of which he has said and all of which is false. But, you know, this is the President's reaction to particularly any problem on his watch, is to never take any personal responsibility and push it off on Democrats..

In 2018, the media lied about a photo of a girl crying at the border, saying that she had been separated from her mother by the Trump administration, when in fact she had not.