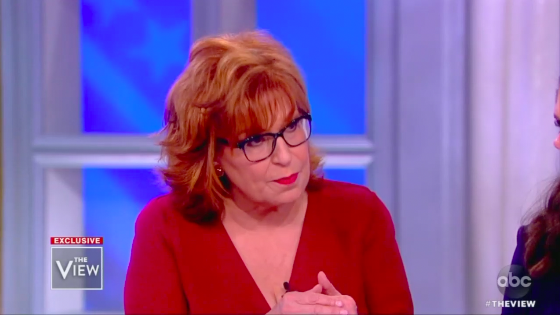 Former Vice President Joe Biden was on The View Friday where he was pressed by the hosts, from the left, over his treatment of Anita Hill during the Clarence Thomas hearings. The hosts begged him to apologize to Hill, and the women who accused him of inappropriate touching and kissing. Considering these are the two biggest issues facing his presidential campaign so far, you would think he’d have his answers more prepared. Still, Biden struggled to answer each question as he tried to defend his behavior.

First, the hosts urged him to apologize for the accusations that he inappropriately touched and kissed women. Unlike the news networks, The View took the issue seriously. Sunny Hostin asked, “Are you sorry for what you did? Are you prepared to apologize to those women?”

But Biden refused to apologize. In a long, rambling answer, he began with: “Look, here’s the deal, I have to be and everybody has to be, much more aware of the private space of men and women...I’m much more cognizant of that.”

He went on to claim that many people have expressed they appreciated his touchiness. But Hostin pressed again.“They have said that but they have also said they’d like an apology,” she urged. Clearly frustrated, he struggled to find the right words, finally saying he was “really sorry that they, what I did in talking to them, trying to console, that in fact, they took it a different way.”

From there, the hosts grilled Biden from the left on his Anita Hill problem. Biden was defensive again, claiming it was the Republicans who were disrespectful to the Clarence Thomas accuser, decades ago. He bristled at the notion he should apologize for anything. At one point, a frustrated Joy Behar pleaded with Biden to just say he was sorry right then and get this controversy over with:

“So here’s your opportunity right now to just say, apologize, say you’re sorry. I think we can clean this up, right now!” Behar begged. But Biden again insisted he had apologized already and shrugged off any responsibility. “I’m sorry she was treated the way she was treated. I wish we could have figure out a better way to get this done,” he stated, before trying to spin the situation in a positive way, saying she inspired the #MeToo movement and the Violence Against Women Act.

But Behar was determined to get Biden in the clear with the Democrats. She practically wrote his apology for him, urging, “You know what I think she wants you to say, is ‘I’m sorry for the way I treated you.’ Not for the way you were treated. I think that would be closer,” she pleaded him to try again.

Again, Biden fumbled through his answer but was adamant he did nothing wrong. “Look, I’m sorry for the way she got treated...I don’t think I treated her badly,” he insisted. As the co-hosts kept trying and getting nowhere with Biden, they moved on.