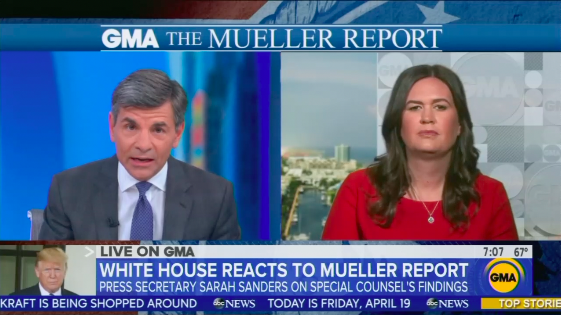 As we saw the media meltdown Thursday upon the release of the Mueller report which found no collusion between Trump and Russia, journalists quickly began renewing their push to impeach the president over obstruction, instead.

With Sanders, Stephanopoulous was combative and repeatedly interrupted her defenses of President Trump to call her a liar. He even opened with slamming the White House’s “culture of lying” which is ironic coming from a former Bill Clinton staffer:

That was the first headline that we had saying he didn't reach the conclusion there was a criminal conspiracy but what the report also does is expose a culture of lying at the White House, the president lying, telling others to lie and it calls your personal credibility into question as well...That’s not a slip of the tongue, Sarah, that's a deliberate false statement.

Sarah, I’ve got to stop you there because you said something else to the Special Counsel. Hold on a second….Why can't you acknowledge that what you said then was not true.

In fact, Sarah, what you did -- Sarah, hold on a second…why did you tell the press that the President did not dictate that statement when he did?

You said the president did not dictate that statement after consulting with the President so did he tell you that, and why did you repeat that to the country?

Unsurprisingly, Stephanopoulos took the opposite tone with Nadler, letting him go on long-winded rants about how the Trump administration, Sanders and Bill Barr were liars who couldn’t be trusted, even denying the Mueller report's findings that there was no collusion. The ABC anchor didn’t push back on any of these statements.

Instead, he urged the Democrat to start impeachment proceedings: