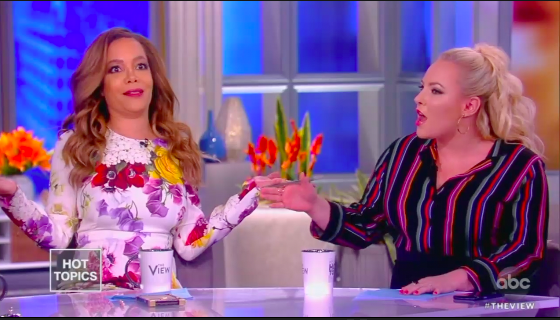 The co-hosts of The View had a heated exchange Thursday after WikiLeaks founder Julian Assange was arrested in London, in response to an extradition request by the Justice Department. After co-host and ABC legal analyst Sunny Hostin made the case that Assange deserved to be protected under the First Amendment, Meghan McCain took her to task, calling her argument, “straight propaganda.”

The U.S. has charged Assange with conspiring with Chelsea Manning in 2010 to hack into a computer at the Pentagon and release tens of thousands of documents of confidential information. Whoopi started the segment asking if he really “broke the law” or was this a matter of freedom of speech. Co-host Joy Behar brought it back to the 2016 election, saying the WikiLeaks release of Clinton and Podesta’s emails is what “caused Trump to win.”

But co-host Abby Huntsman pointed out that it was the Trump administration who is seeking to prosecute Assange. Co-host Meghan McCain also slammed the Democrats’ hypocrisy:

“[T]he only time the Democrats started caring is when it affected them politically and when Hillary Clinton's emails were released and when John Podesta’s emails were released,” she argued, adding how the Obama administration “punted” on Assange’s cybercrimes that happened during his terms.

That part irritated co-host Sunny Hostin who passionately argued that this was all about freedom of the press and Assange was “protected” by the Constitution:

At that, McCain blew up. “What you said was straight propaganda!” she seethed, adding “They're not First Amendment. He was a cyber terrorist!”

She again called out the left for only caring about WikiLeaks when it affected the DNC and Hillary Clinton:

"He released 750,000 classified or sensitive information that put our military at risk. It put our spies at risk. That put our diplomats at risk. I’m sorry but Democrats only started caring once it implicated Hillary Clinton," McCain argued.

But Hostin could not be swayed.

As McCain kept shouting, “It's cyber-terrorism!” Whoopi cut to commercial.