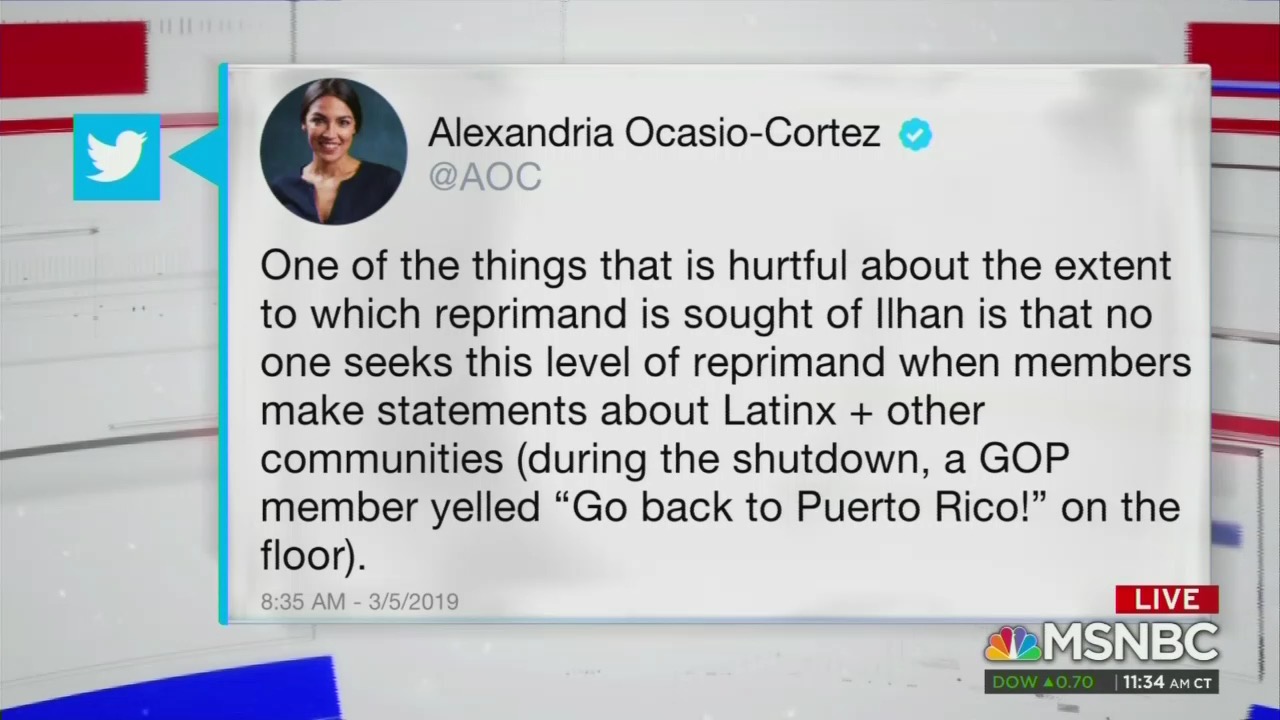 Tuesday MSNBC host Andrea Mitchell promoted a false tweet from Democrat Congresswoman Alexandria Ocasio-Cortez which smeared Republicans as racists while defending fellow Democrat Ilhan Omar. Even though the claim Ocasio-Cortez made in the tweet was debunked immediately, Mitchell and her liberal guests touted it as if it were fact.

After Ilhan Omar made yet another anti-Semitic comment last week, House Democrats rushed to form a resolution condemning anti-Semitism, in an effort to scold the freshman Muslim Congresswoman. Apparently this was just too much for Andrea Mitchell who spent an entire segment timidly admitting anti-Semitism was wrong, but that Omar was being unfairly persecuted, at the same time. In fact, it was more about racist Republicans, anyway.

As proof, Mitchell touted a tweet from Ocasio-Cortez which falsely insinuated that Republicans had yelled something racist against Latino Democrats on the House floor, without giving any context:

She has support today from AOC, Alexandria Ocasio-Cortez, tweeting today that “One of the things that is hurtful about the extent to which reprimand is sought of Ilhan is that no one seeks this level of reprimand when members make statements about Latinx+other communities (during the shutdown a GOP member yelled, ‘Go back to Puerto Rico!’ on the floor).

“Jonathan, she’s got a point!” Mitchell remarked in approval.

Her guest, The Washington Post writer Jonathan Capehart agreed. “Well yes, she does have a point,” he repeated.

But this tweet was debunked pretty quickly. The “Go back to Puerto Rico,” remark was made by a Republican to Democrats after they returned from lobbying and partying in Puerto Rico during the government shut down. In fact, the Republican who said it even apologized afterwards if what he had said was taken in a racist way.

Regardless, Capehart continued slamming Republicans as racist bigots who never hold their members accountable for anything they say:

Mitchell nodded her head and referenced the “belated” rebuke of Congressman Steve King. Capehart agreed, but neither one of them mentioned how Republicans stripped King of his committee duties whereas Democrats have yet to take away any committee privileges away from Omar.

Even so, Capehart continued worrying about how unfair a bill that denounces anti-Semitism was to the freshman Democrat. Capehart complained how this was a hard lesson for Omar to learn and hoped she’d maintain her same beliefs while “learning” to navigate Congress:

“I hope she's learning, what she's going through and how she can still change her behavior without changing how she thinks or what she believes,” he gushed.

Fellow guest, MSNBC contributor Kimberly Atkins ended the segment by grumbling that Omar’s offenses were not even close to what King said that this measure was pretty pointless:

“[] feel like certainly on the Republican side there's a race to equate what she did to what Steve King did, and there's not, it's completely different. But there's also no advancing the cause of fighting anti-semitism or in talking about u.s./israeli relations.It’s sort of, just an impasse,” she said.

CNN and MSNBC also featured this Alexandria Ocasio-Cortez tweet several times during their Tuesday afternoon programs, without offering any correction to her false insinuation.