ABC's Roberts Won't Call Smollett Story 'Alleged,' Gushes, 'If Attackers Are Never Found, How Will You Be Able to Heal?' 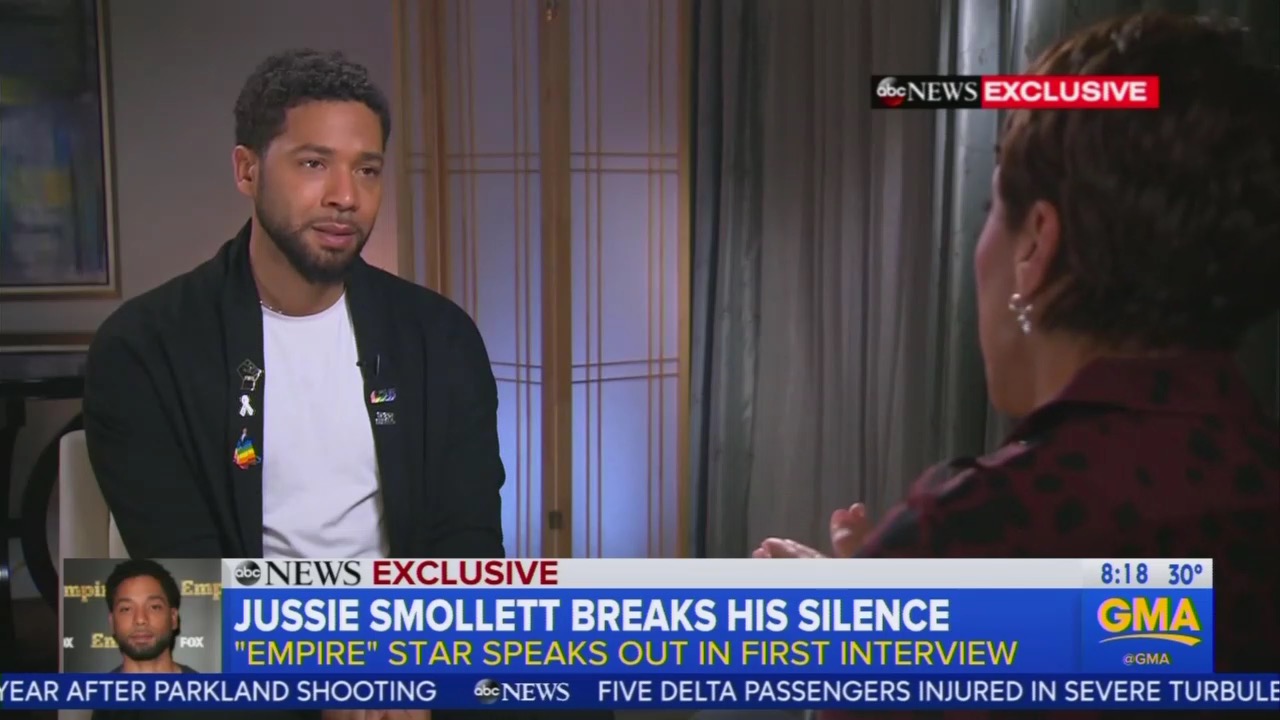 ABC previewed their exclusive interview with actor Jussie Smollett on Thursday, his first interview since the alleged hate crime he recounted to Chicago police two weeks ago. While host Robin Roberts did ask the actor about the controversial aspects of his story on Good Morning America, she did not refer to the attack as “alleged” even once. Instead, she asked him to teach us all what we could “learn” from the alleged experience.

During the first clips of the full upcoming Nightline interview GMA previewed, Roberts focused on Smollett’s story, asking him to share again what happened.The actor clearly seemed to struggle with his answers in just relaying his story. His demeanor changed dramatically in the second half of the interview, after Roberts started treating him as if he were a martyr, with fawning questions like:

If the attackers are never found, how will you be able to heal?

It's been two weeks since that night left actor Jussie Smollett bruised but not broken. And he's still processing the raw emotions. Have you ever been threatened before?

Repeatedly, Roberts came to Smollett’s defense, at one point, telling her fellow anchors that his story was “credible:”

That's the first time he's given a detailed account, an account that Chicago police have saids that been consistent. He hasn't changed his story and they also said it's credible. The police have said that and also that he's been very cooperative.

She even assisted Smollett in his story at another point:

In fact, the week before the attack police confirm a letter was sent to the Fox studio in Chicago with threatening language and laced with powdery substance likely Tylenol. Do you think there's a link between the letter and the attack? You did mention it to the police right away about the letter.

Smollett became angry repeatedly during the interview at the notion that he “made up” the story, which has raised much skepticism for its dubious claims that two Trump supporting white guys were walking the streets of downtown Chicago in the middle of the night and recognized the liberal television actor. Roberts didn’t acknowledge that aspect of his story as being unbelievable. She only offered two question skeptically, asking why he went to Subway at 2 AM in subzero temperatures and why he didn't hand over his phone immediately.

The actor bashed his critics as “not wanting to know the truth,” even demanding his story be unchallenged as it stands. “I want them to stop being able to say, ‘alleged attack,'" he gushed. Well with Roberts at least, he got his wish. Not once in the interview shown did she call the attack, “alleged.” She instead referred to the alleged incident as, “that night” and “his story.”