Mitchell Scolds Pence: 'Can You Understand' You're 'Creating a Toxic Climate' by Rebuking Omar's Anti-Semitism? 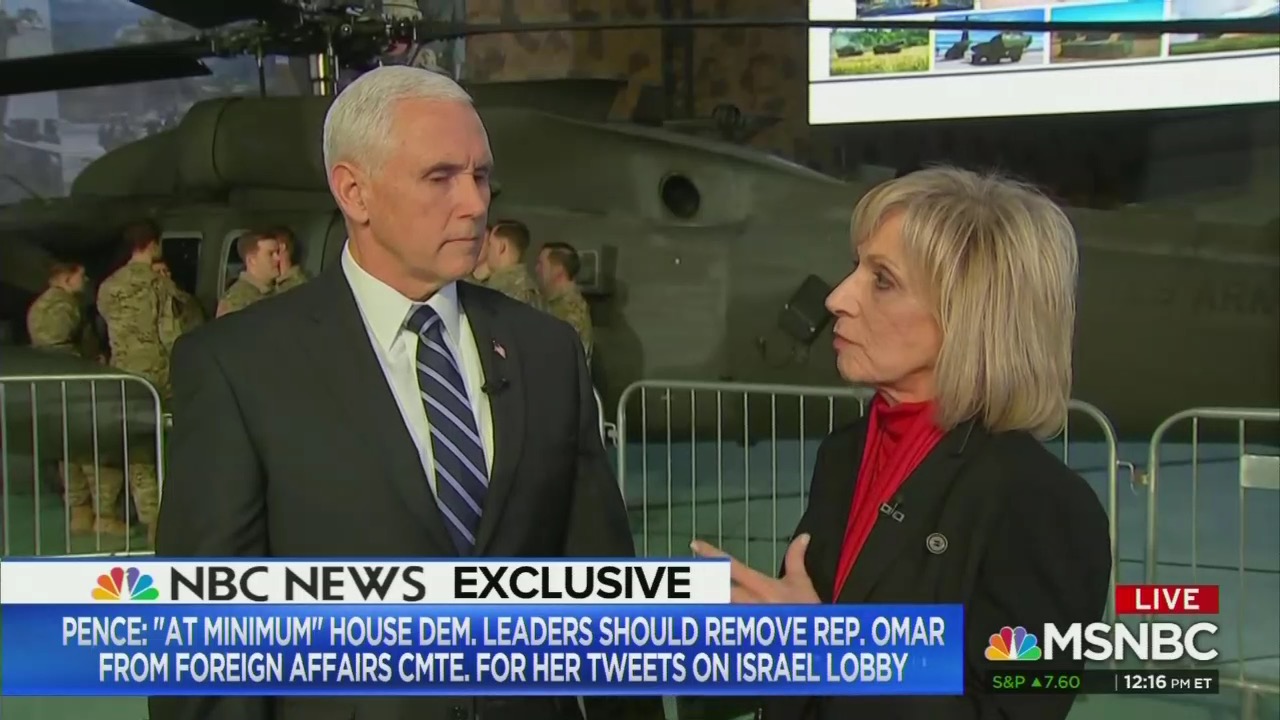 After Vice President Pence called on Rep. Ilhan Omar to be punished for her anti-Semitic remarks, MSNBC host Andrea Mitchell used the blowback against the Democrat to complain about anti-Muslim discrimination. The journalist grilled Pence Wednesday afternoon, while he was in Warsaw, Poland attending a U.S. sponsored summit on the Middle East.

Instead of criticizing the Democrat for her remarks and non-apology, Mitchell grilled Pence for daring to rebuke Omar, blaming Republicans for their own bigotry:

I have to ask you about your tweet from the plane against Congresswoman Omar. You read her out, we understand you want her to be kicked off the foreign affairs committee. At the same time Republicans were very slow to go and punish Congressman Steve King of Iowa, who is historically critical of Hispanic Americans. And the President's Muslim ban. Can you understand how that creates a climate of toxicity in all directions?

Pence explained to the MSNBC anchor how serious and dangerous anti-Semitism was, adding that King was punished by being kicked off committees for his controversial comments. Undeterred, Mitchell pressed on, asking, “And what the President said about banning all Muslims in 2015?”

Pence explained to Mitchell that the travel ban did not discriminate against Muslims. Afterwards, fill-in anchor Kristen Welker even touted Omar’s tweet slamming Trump for his own supposed “hatred” against “Jews, Muslims, indigenous, immigrants, black people and more.” Welker asked Mitchell her thoughts about Pence’s responses, in a follow-up exchange.

Mitchell admitted that the original “Muslim ban” was not upheld by the courts, but still complained, “I was trying to get at the whole issue of how Muslim-Americans have been discriminated against and have been categorized and profiled by this president when he was a candidate and since.”

Still reluctant to criticize Omar’s comments, she said they were “deemed inappropriate” and “anti-Semitic” by the “democratic leadership.” Eagerly bringing the focus back to Republicans, she griped again that Rep. Steve King was not punished swiftly enough by Republicans, so this was all “political”:

There's a very heavy overlay here of politics here as well. The truth is that Steven King, Congressman King was not punished by the Republicans until -- for years when he was talking against Hispanic-Americans, only when he said the most recent things about white supremacism was he kicked off committees. So there's a big tortured history here.

But turning the situation around to blame Republicans wasn’t enough. Mitchell ended the segment by defending Omar’s reputation.

“That said, you can criticize Israel without being anti-Semitic,” she stated to Welker.

Mitchell herself has a history of downplaying anti-Semitism from the left.