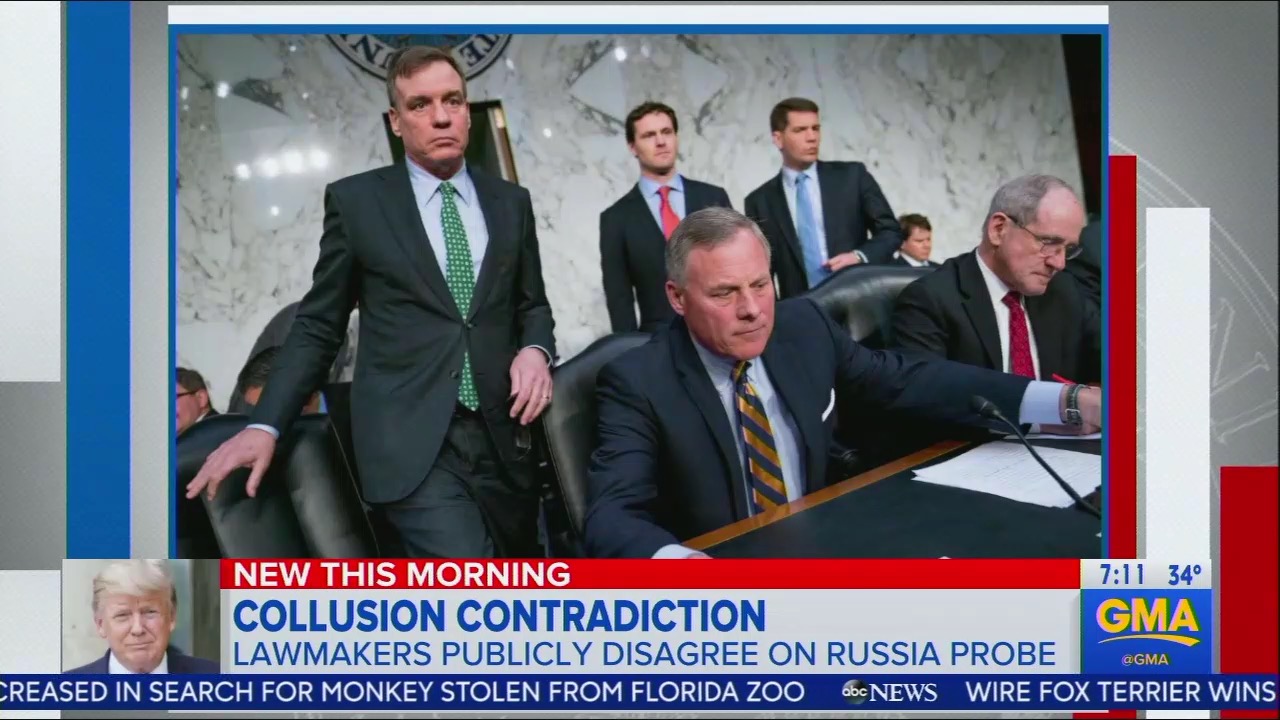 After ignoring Tuesday’s news that the Senate Intelligence Committee had found no evidence of collusion between the Trump campaign and Russia, ABC was eager to report on the story Wednesday morning after the top Democrat backtracked on his own committee’s findings. NBC and CBS still found no time to report on the Senate finding no evidence of collusion on their morning programs.

On Good Morning America, anchor George Stephanopoulos touted that Democrat and Republican leaders were “at odds over the conclusion of their investigation.” Congressional correspondent Mary Bruce opened her report, gushing it was a “rare public rift” for this bipartisan investigation, before hyping Democrat Mark Warner’s reluctance to acknowledge that they found no evidence of collusion thus far. Bruce took a note from the Democrat's playbook, slamming President Trump for tweeting the Senate’s findings, as “false”:

For a committee that has managed so far conduct a bipartisan investigation, this is now a rare public rift. The Republican chairman Richard Burr says that as of now, they have found no factual evidence of collusion but he notes that their investigation is not yet complete. But the top Democrat on the committee, Senator Mark Warners tells us he respectfully disagrees, that he's not ready to draw any conclusions since their probe is still ongoing. Regardless, President Trump is seizing on all this, tweeting, and falsely claiming that the Senate Intelligence Committee has now concluded that there is no evidence of collusion.

That is a contradiction from what the committee originally told the media. NBC News initially broke the story Tuesday, with reporter Ken Dilanian noting that Democrats agreed there was no evidence of collusion:

[W]hat I've been doing since then is checking with my sources on the Democratic side to understand the full context of his remarks because that was essentially a partisan comment from one side, but this is a bipartisan investigation and what I found is that the Democrats don't dispute that characterization.

Nearly a year ago, the House Intelligence Committee also found no direct evidence of collusion, and shockingly, the media barely covered those findings as well.