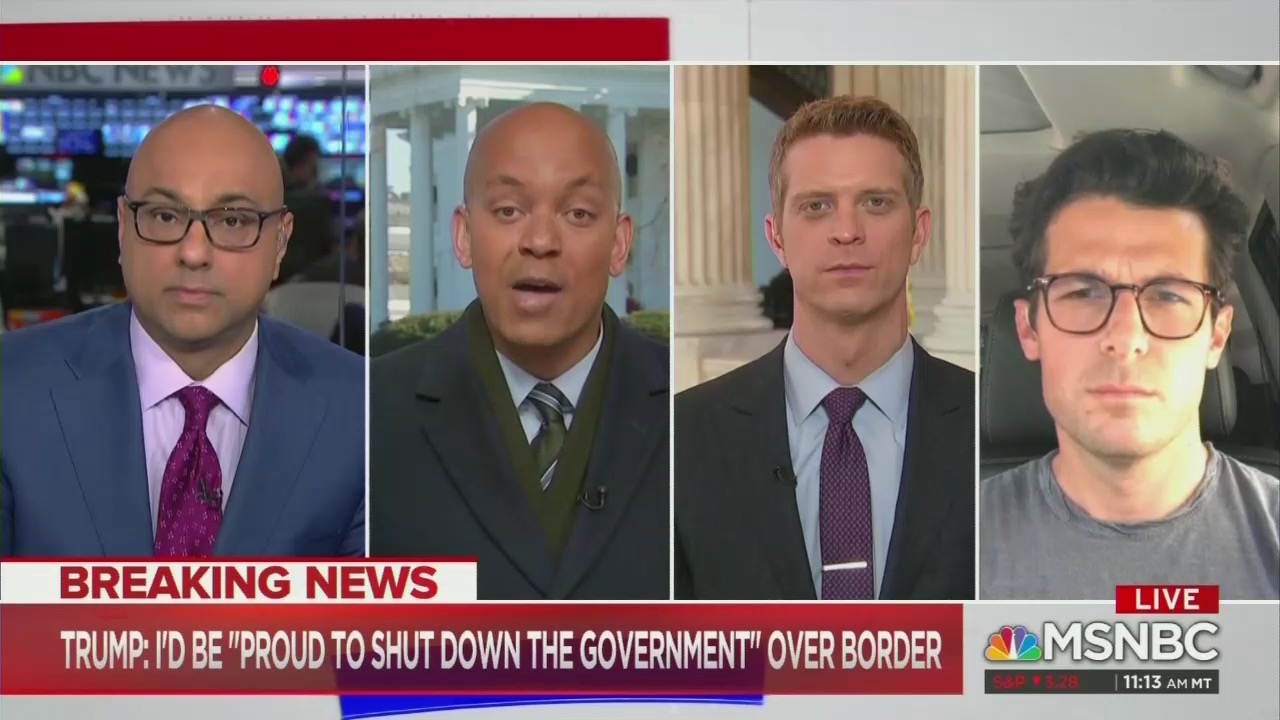 After President Trump’s explosive, televised meeting today with Democrat leaders Nancy Pelosi and Chuck Schumer over funding the border wall, MSNBC journalists took issue with Trump’s tweet about the problem of open borders increasing crime and disease, saying that was racist and xenophobic.

MSNBC Live host Ali Velshi lamented all the “pinocchios” The Washington Post had given President Trump, particularly on the border wall.“[T]hings he keeps on saying without correction!” he sighed, handing off to reporter Geoff Bennett, who went on a rant about how xenophobic Trump was for pointing out that illegal immigrants commit crime and bring diseases into the country, in a tweet. Bennett asserted the oft-repeated, but devoid of evidence, claim that illegal immigrants commit less crime than actual citizens:

One of the things we saw from this tweet storm was the president saying again that immigrants coming over the southern border bring crime and disease. One of the things we know based on facts is that first generation immigrants actually have a lower crime rate than the overall population. This notion that there might be this disease outbreak along the southern border, well that's certainly not backed up by evidence. In fact the CDC and its Mexican counterpart actually screen for that sort of thing. So to cast immigrants, to sort of judge them based on their desirability and health status, a that is a classic xenophobic move that really has its roots in the 1900s. You look at some of the things immigration restrictionists had to say back then and it was always about desirability. Why? Because that was an argument more acceptable to make than one's race or ethnicity. Again the president seems to be pulling from that playbook.

Correspondent Jacob Soboroff also huffily defended illegal immigrants over the security of our actual citizens, saying that it was “racist” for Trump to talk about terrorists coming across the border because he was making assumptions about “brown people” that weren’t from Mexico:

The other thing, I just want to quickly say, is Geoff was mentioning the xenophobia of the remarks by the President. Some folks also might call it explicitly racist. That is because the president is equating people with brown skin quite frankly that aren't from Mexico, aren't from Central America, people you wouldn't normally see at the border with terrorists. You heard the president citing the statistic about terrorists. He's conflating a special group called special interest aliens. People who may not regularly cross at those continuous countries along the southern border who are classified by the Department of Homeland Security as such. We know if you go into I.C.E. detention, like I have, in the Los Angeles area, there are a lot of Indian nationals that are coming into this country. The idea that just because a person doesn't look or sound the same and come from a country that's not Mexico or Central America that they're a terrorist is a preposterous notion and the president doesn't have it right period.

Bennett’s claim that illegal immigrants break the law less than American citizens is highly disputed and even contradicted by some researchers, but journalists still continue to repeat it. Despite the obvious fact that if you enter the country illegally, you already have broken the law. Beyond that, it really a stretch to claim that people who come in to the country from impoverished countries, could be carrying diseases we’ve eradicated in our own country?

It seems facts and logic aren’t useful to MSNBC journalists, who’d rather cling to their emotional rhetoric and hatred for the president as the basis for their “reporting” on the border.