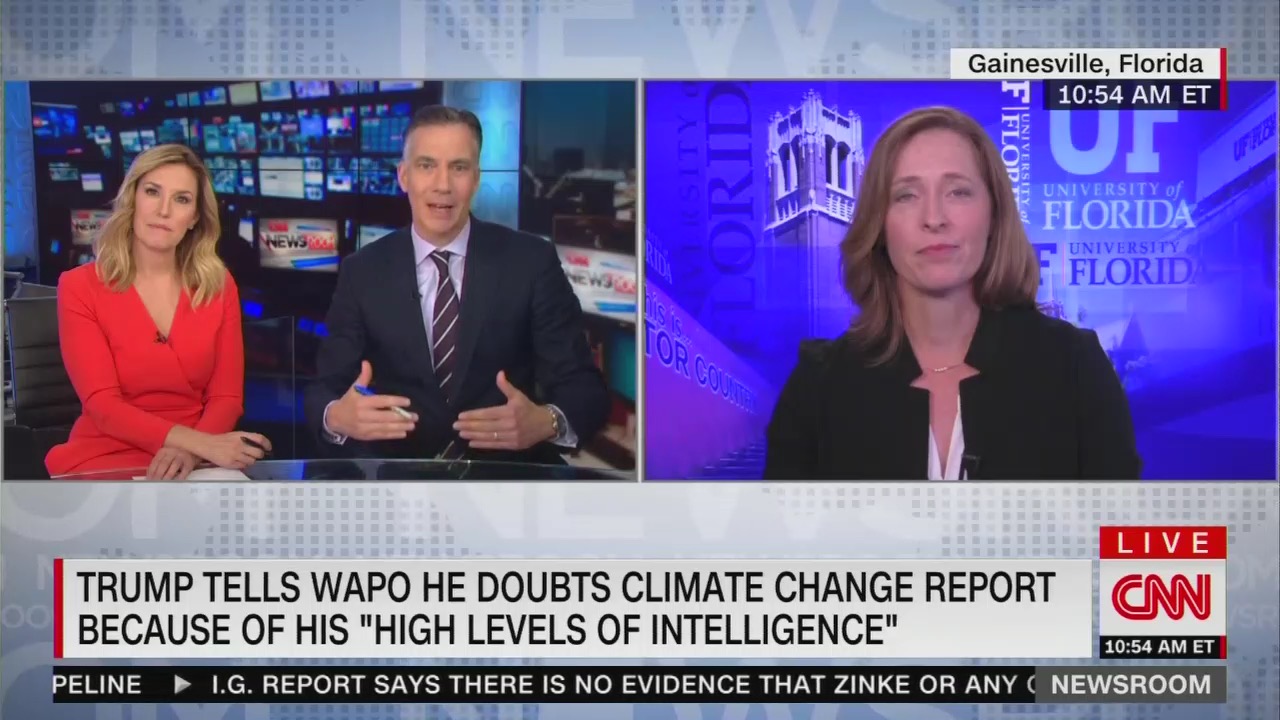 Former Obama administration official and host Jim Sciutto fretted we could all face a slow torturous death because the Trump administration’s dismissal of a recent apocalyptic climate change report. Sciutto shared his worries with his guest, a geology professor on Wednesday’s CNN Newsroom.

Co-host Poppy Harlow set up the interview by placing President Trump as the central villain of the story, for denying there’s evidence that humans contribute to climate change.

President Trump reinforcing that he does not believe climate change is at all man made, contributed to by humans. He doubled down on this in an interview on the Washington Post last night which once again contradicts the national climate assessment released by his own administration Friday.

Even the “U.S. Military believes it!” Sciutto pointed out, adding that Sarah Sanders also pushed back on the report. Introducing one of the researchers whose work was cited in that report, Andrea Dutton, associate professor of geology at the University of Florida, he directed her to “explain” to the White House why they were wrong:

“You are an expert here. Explain how you do that and why the White House position here is misplaced,” Sciutto stated.

After Dutton cited her credentials and argued that the “fingerprints of carbon dioxide” all over the planet and greenhouse gas emissions reveal that men are responsible for climate change.

Dutton went on to blame the administration for denying evidence right in front of their face because they were “scared” to believe it’s true:

The CNN anchors readily agreed with their guest.

“Sure, that are very near, near-term scary things that are predicted that could happen as a result,” Harlow gushed, despite this hypoerbolic tone of near disaster being employed by the media for the past twenty years. Harlow also directed her guest to school the president on why you can’t equate daily weather to climate change.

After doing so, Sciutto jumped in to bash Trump, fretting that the human race was “running out of time” before we were “slowly burned to death” because his administration wasn’t doing enough to stop the impending doom:

The president also either deliberately or mistakingly messes up the differences between a clean environment and a warming environment -- he keeps saying we have record clean environment and doesn't get to the temperature. I want to ask the question for folks at home. We have kids. We don't want to be slowly burned to death on our own planet here. Is the human race running, in simplest terms, running out of time to take the measures necessary to rein in this rise in global temperatures?

Dutton agreed that time was running out and the situation was becoming more urgent as each day passed, also laying blame on the Trump administration for not turning to "clean energy."

After another CNNer warned us Monday that hamburgers are going to kill us, is it any wonder that “fake news” has become synonymous with that network?